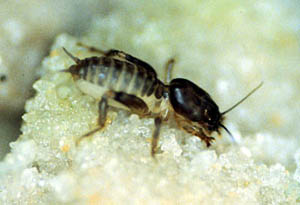 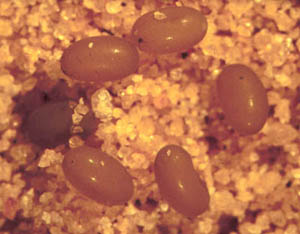 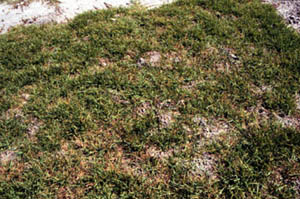 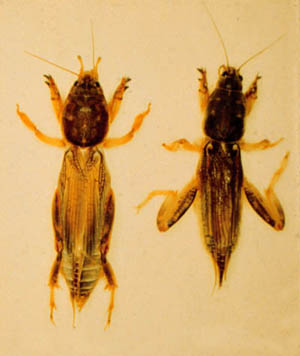 Mole crickets are light brown, up to 1 ½ inches long, have short, stout forelegs, spade-like feet, and large eyes. The young resemble the adults except that they are much smaller, have no wings, and are sexually immature. Three species occur in Georgia. Two, the tawny mole cricket and the southern mole cricket, are pest species. Mole crickets occur primarily in the sandy soils of the Coastal Plain.

Adults lay eggs in underground cells in the spring. The eggs hatch in two to four weeks, depending on the weather. Nymphs feed and grow through the summer and mature into adults in the late fall or winter. Mole crickets spend the winter deep in the soil, but come to the surface to feed during warm periods. Adult crickets leave the soil on warm spring nights to fly around, sometimes in huge numbers, looking for mates and egg-laying sites. There is one generation per year, and most adults die by early summer. Tawny mole cricket mating flights occur in March and early April; southern mole cricket flights occur in April and in early May. Cold or wet spring weather may delay flights.

The most damaging species of mole crickets feed on grass. Other species don't feed directly on grass, but their tunneling activity damages turf. Both young and adults burrow beneath the soil and make tunnels similar to, but much smaller than, those made by moles. This loosens the soil and causes it to dry out quickly. It also clips the roots of the grass plants. Left unchecked, mole crickets will build up in an area and completely destroy the grass, leaving bare ground.

Insecticidal control of mole crickets is most effective in summer (late June or early July) when most of the mole cricket eggs have hatched and nymphs are still small. Granular or spray insecticides are the formulations of choice for summer application. In late summer, mole cricket baits or insecticides with longer residual activity will be more effective. Effective control in spring and fall is difficult because of unpredictable weather, cricket activity, and their large dispersal flights. At these times of year, treat only severely damaged areas where grass is dying out. Spot treat with an appropriate insecticide. Bait formulations are most effective in spring and fall.