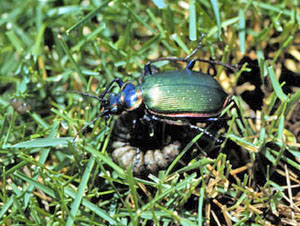 Ground Beetles (Carabidae) are predaceous as adults and as larvae. There are some seed feeding species. They are active on the ground primarily at night. Adult beetles vary in size from 1/4 to 1 inch or longer. Many species are metallic, while others are plain brown or black. They prey on armyworms, cutworms, small mole crickets and other insects. 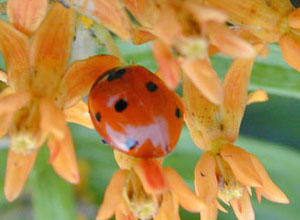 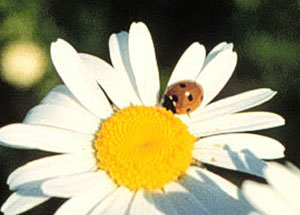 Lady Beetles (Coccinellidae)
are among our most important beneficials. Adults and larvae feed on aphids, scale insects, mites, mealybugs, other soft-bodied insects and their eggs. Lady beetle adults are oval-shaped. Most are orange or reddish with black markings.

Lady beetle larvae are elongate, covered with spines, and dorso-ventrally flattened. Often they are brightly colored with spots. Some larvae are covered with white waxy secretion like mealybugs. Adults and larvae are voracious feeders on aphids, a single individual consuming hundreds of aphids during its lifetime.

Rove beetles (Staphylinidae)
have shortened elytra (wing covers) that leave the segments of the abdomen visible giving these beetles their characteristic appearance. Most species are slender and elongate from 1/16-1/2 inch long. Typically they are reddish-brown to black. Many species are predaceous, some feed on decaying organic matter helping to recycle needed nutrients in the landscape. 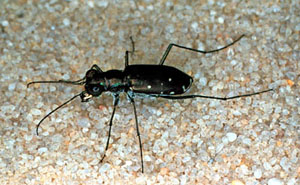 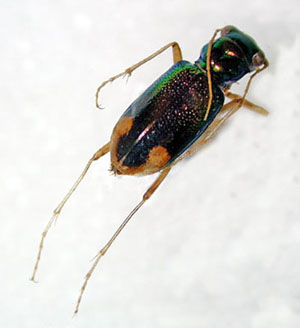 Tiger Beetles (Cicindellidae)
are very active, often metallic beetles 1/2-3/4 inch long. They are difficult to collect because of the speed with which they run or fly. Larvae live in burrows in the soil and ambush prey as it goes by. Some species are often well represented in landscape beds.