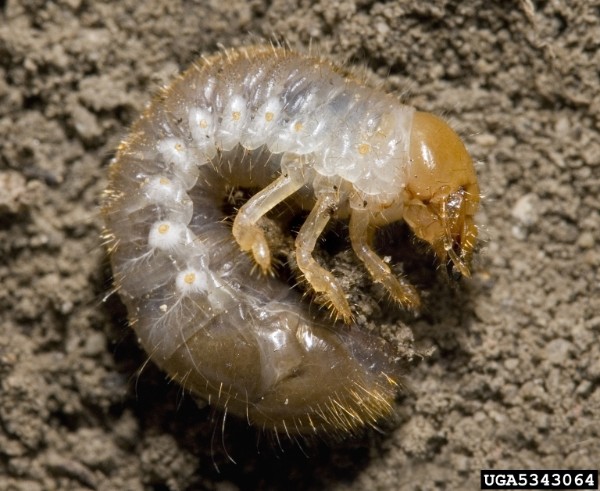 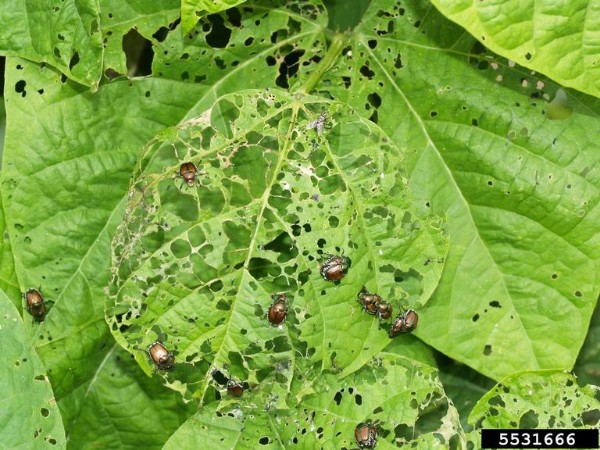 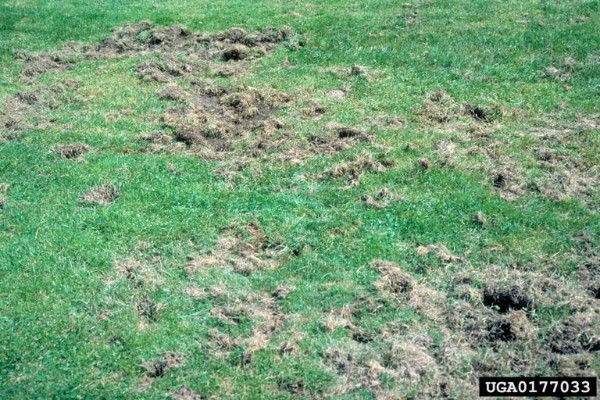 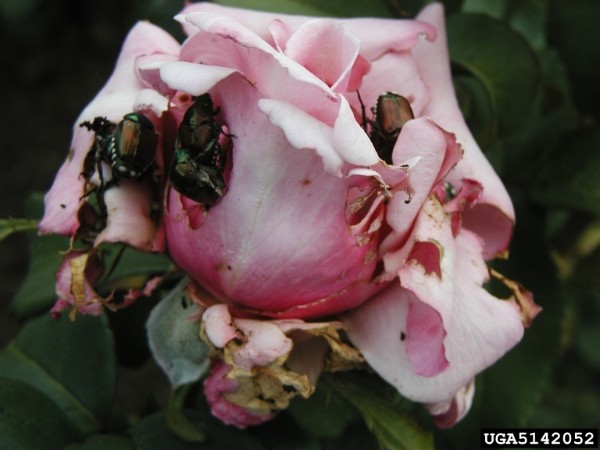 The Japanese beetle (Popillia japonica Newman) (Scarabaeidae: Coleoptera), as the name suggests, is native to Japan and was introduced to the U.S. through the transport of plant material. It is a highly devastating pest, attacking a variety of landscape and garden plants, fruit trees, field crops and turf.

Adults are shiny and attractive, medium-sized, ovoid-shaped beetles, about a half-inch in length, with metallic green bodies and iridescent bronze elytra. The elytra, or the first pair of hard wings, do not cover the body completely, exposing six small tufts of white hair along the sides of the abdomen under the wing edges. This is an important identifying characteristic that distinguishes Japanese beetles from similar-looking beetles. Females are typically slightly larger than males. The adults are weak, clumsy fliers, often falling several times when they hit obstacles in their path. However, they are known to travel long distances.

The most visible symptom of Japanese beetle damage is skeletonization of the foliage, which occurs when the beetles consume the leaf lamina, leaving a skeleton of the veins intact. Japanese beetles also destroy flowers and fruit, and during population peaks, they can defoliate entire trees. The adult beetles usually begin feeding on the topmost, youngest leaves of a plant irrespective of its height, and they are most active during the day from midmorning to early evening. Larval feeding on roots leads to symptoms resembling drought stress, and patches of wilting, discolored, or dying plants or turf can be seen. These small patches gradually expand, and when the roots of such plants are examined, grubs can be seen. Grubs are also sought by birds and larger animals like raccoons and armadillos that add to the destruction when they dig for grubs.

It’s easy to identify defoliation caused by Japanese beetles. So that the worst damage is prevented, start checking for beetles early in the season before damage symptoms appear. Regular scouting for adults and grubs should be conducted starting in early spring. Using beetle traps is a good way to monitor populations, but traps have not been shown to be effective at reducing populations or feeding damage on plants. Japanese beetle traps use pheromones and floral lures to attract both males and females. The clumsy flight of the beetles causes them to be caught up in the trap. Larvae can be sampled in late spring (April) to late summer (September). Checking underneath pale brown or discolored areas in lawns or turf, or among roots of unusually wilting plants, will reveal grubs. Ten to 12 grubs within an area of 1 square foot warrants treatment, although the wetness of the soil influences larval infestation.

Japanese beetles are not easy to control once they become established, especially during population peaks. Extensive host range and the differing habits and habitats of adults and larvae are factors that help them to escape and survive control measures. However, integrated pest management (IPM) programs with community participation can reduce their influence to a great extent. IPM programs use cultural, biological, and chemical methods and do not aim at total elimination of the beetles. Since their behavior is not always predictable, it is best to regularly monitor populations.

Mechanical traps are an inexpensive yet effective way to monitorthe beetles. They should be placed early in the spring to detect first emergence of beetles. One disadvantage of the trapsis that they attract large numbers of beetles but do not always capture or kill them. Therefore it is best not to use them for pest suppression. Do not place traps near susceptible plants, and remove the traps once beetle activity has been detected.

Japanese beetles are attacked by several natural enemies. Some are available commercially, while others are in various stages of testing. Grubs are affected by microbial biological control agents like entomopathogenic nematodes (Steinernema glaseri and Heterorhabditis bacteriophora), the bacteria Bacillus thuringiensis (Bt) and Paenibacillus (formerly Bacillus) popilliae (milky spore), and fungi Metarhizium anisopliae and Beauveria bassiana. A parasitic wasp (Tiphia vernalis) that attacks the grubs and a fly (Istocheta aldrichi) that parasitizes adult beetles are also reported. Note that B. popilliae, the bacterium that causes milky disease in grubs, is endemic in Georgia soils and there is no evidence that the incidence of milky disease can be increased by application of milky spore products.

Chemical control often becomes necessary in managing this pest. Choosing pesticides should be done after assessing the situation and the risks and benefits associated with their use. Short residual insecticides sprayed on foliage and flowers effectively manage the adults, as do commonly available systemics. Longer-persistence insecticides applied to the soil in early summer are good for the preventive control of grubs. Choose insecticides labeled for use against Japanese beetles and for application on the host plant referring to the most current version of the Georgia Pest Management Handbook. Your local University of Georgia Cooperative Extension county office can help with specific recommendations. Follow all directions, particularly safety precautions on the insecticide label.

Japanese Beetles in the Nursery & Landscape