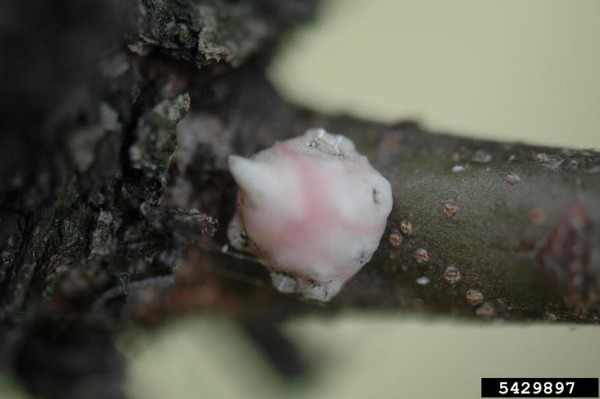 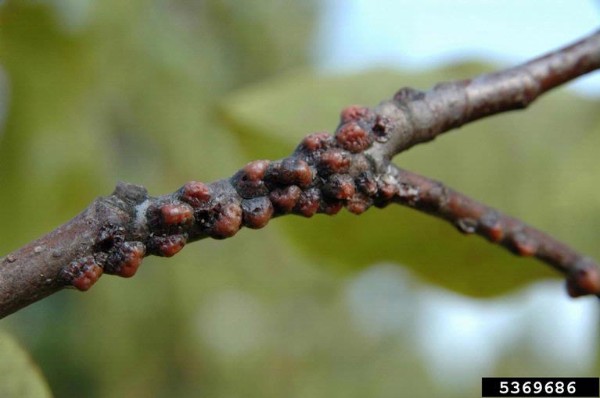 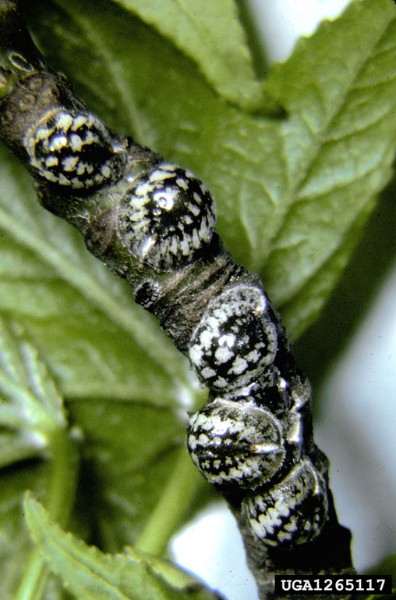 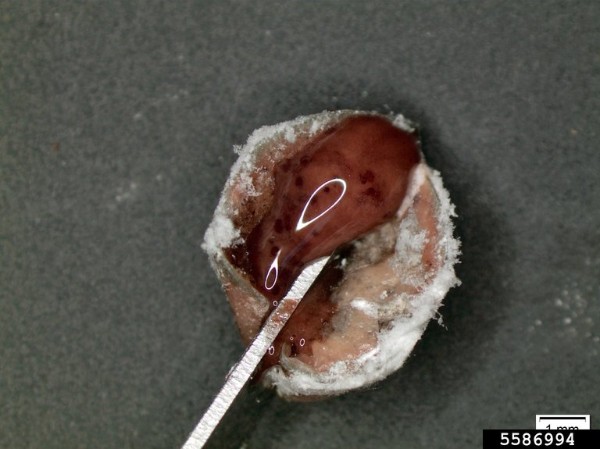 Soft scales (lecanium, kermes, wax, and bark scales) produce honeydew because they feed on a high-volume liquid diet drawn directly from vascular tissue (phloem) that transports dissolved sugar and nutrients within the plants. This liquid can attract ants and supports the growth of the unsightly black sooty mold fungus. Most soft scales have one generation per year, with a few exceptions. Many retain their legs throughout life and can move around on the plant. Soft scales secrete a wax covering, protecting them from natural enemies, pesticides, and desiccation (extreme dryness). Armored scales are generally flat in appearance, nondescript, and well-camouflaged. They do not produce honeydew. Instead they feed by bursting plant cells and eating the contents. They also do not directly access the vascular bundles of the plant (the phloem), and their waste is produced as their protective hard cover. After emerging from the egg as a motile crawler (with legs), armored scales find a suitable feeding spot and settle down, lose their legs, and live beneath their protective scale covering and previously molted skins. Except for adult males, armored scales do not move after the first molt. Most of the armored scales have multiple generations per year.

Scale insects spend most of their lives immobile under their protective coverings. When eggs hatch, the mobile crawlers walk or are blown by the wind to new locations where they settle and begin to feed and produce their own protective coating. The mobile crawlers do not produce protective covering on the body. When the larvae molt, they add a layer of protective covering on the previous one. For some armored scales, the added layers increase in diameter as the larval size increases within the covering. Most scales undergo three to four larval stages. Many soft scales spend the winter on twigs and bark before crawlers move to new foliage in the spring. Some scales are strictly bark-dwellers and can be the most difficult to control.

Check the bark of plants and flip over bumps or lumps that could be scales. If there is a soft body underneath the scale cover, it is an armored scale. If the whole bump (scale body) comes up and can be squished, then it is the likely culprit. If ants or wasps are attracted to a plant’s foliage, look for honeydew producing scales (or aphids or mealybugs). Paper wasps can be attracted to honeydew, but they also hunt for caterpillars to feed their young. The crawler stage is particularly vulnerable to control efforts and can be detected only through close inspection. Consider placing double-sided sticky tape on branches with winter scale populations to detect crawlers hatching in the spring. The UGA Extension publication Biology and Management of Scale Insects in Ornamentals includes common scale insects, their usual plant hosts, and the typical occurrence of first crawlers. Use this information as a guide to schedule scouting activities for these pests.

Scale insects are primarily drawn to stressed host plants. Stress can be caused by a number of conditions— too little or too much water, nutrient deficiencies or toxicities, or temperature extremes (even increases of a few degrees). The presence of impervious surfaces around the host trees or shrubs can increase the ambient temperature, increasing fecundity (number of eggs per female scale) of female scales, which leads to rapid population growth. Early detection is the key for successful management, so scouting should start a week before crawler emergence. Because damage and infestation of scales can be specific to certain tree or plant species or their cultivars, the cultivar identification and selection of host trees or plants are important. If infestation is high on certain branches or twigs, immediately pruning those parts may be the best way to reduce infestation. Pruning often allows improved light, which can improve scale control. The pruned branches or twigs should be immediately removed from the infested area and destroyed to prevent re-infestation from the surviving scales. Do not compost infested branches! The pruned branches can be disposed in tightly secured trash bags and left under sun. The heat generated inside the bag will kill the scales.

Scales are primarily managed by natural biological control measures. Natural enemies play a critical role in keeping the scale population to low levels. The natural enemy complex includes several species of lady beetles, predaceous mites, and parasitic wasps. Both larvae and adult lady beetles feed on scales. Young larvae of certain lady beetle species are smaller than others. They can get underneath the scale shield and feed on the developing scale. Several species of parasitic wasps naturally occur in the landscape and use scales as hosts. The female wasps lay eggs on or inside the scales and the wasp larvae feed on the scale. The parasitized scales usually turn black and can be identified by an exit hole on the shield through which the adult wasps emerged.

In some situations, it’s necessary to apply insecticides to help reduce scale populations. There are factors that should be considered when using insecticides. First, identify the scale species and determine whether the infestation is from a soft scale or armored scale. Regardless of soft or armored scales, applying horticultural oil during the winter can destroy the overwintering scales. Similarly, a delayed winter spray of oil before bud-break is effective in killing certain scale species. In spring and summer, if scales are feeding on the woody tissues (bark and twig), topical applications of oil or insect growth regulators (like pyriproxyen or buprofezin) at least twice during each crawler emergence period can improve control. Other insecticides, such as insecticidal soap and neonicotinoids (dinotefuran, acetamiprid, thiamethoxam, clothianidin), can also be used, especially on soft scales, but care should be taken to avoid affecting natural enemies and other non-target organisms (like bees). If scales are feeding on foliage, neonicotinoid insecticides applied as a soil drench or soil injection work well, especially for soft scales, and foliar-applied insecticides can prevent crawler emergence. Horticultural oils and insect growth regulators are considered reduced-risk insecticides, as they are relatively safe to humans, have reduced non-target toxic effects, and are compatible with other integrated pest management approaches including biological and cultural controls. Besides horticulture oils and insect growth regulators, other contact insecticides, such as organophosphates (diamethoate, disulfoton), carbamates (carbaryl), and pyrethroids (deltamethrin, bifenthrin), are effective as foliar applications but harmful to beneficial arthropods, such as bees, butterflies, and other pollinators. Please read the precautionary statements on the insecticide label to reduce exposure to non-target organisms like pollinators. Soft scales usually have one or two generations per year, but many armored scales have multiple generations per year (three to four generations). Later in the year, these generations can overlap. It is also important to note that crawler emergence timing varies by scale species. For this reason, tracking crawler emergence timing to determine foliar insecticide application is critical. If a systemic insecticide is used as a soil drench or trunk injection, the timing of crawler emergence is less critical, and a single application should provide adequate control. Multiple applications of insecticides may be required during the emergence period if insecticides are applied as a foliar spray, especially for armored scales. Please read the label for rates and specific restrictions. Additionally, the location of the scale infestation within a tree or shrub (on foliage, stem, twigs, or branches) is an important factor if a systemic insecticide is used. Typically, systemic insecticides move upward (from root system to foliage) and end up in actively growing leaves. Most soft scales tend to infest the foliage and any neonicotinoid systemic insecticides can be effective on those scales. However, armored scales typically infest the twigs, branches, or bark of the host tree or shrub. Armored scales are usually exposed to lower doses of systemic insecticides than scales that infest the foliage, because systemic insecticides usually move through the vascular bundles (phloem or xylem vessels) and do not stay there. Also, most armored scales do not directly feed on the vascular bundles but on the leaf’s green, photosynthesizing cells. By feeding this way, they are exposed to low doses of applied insecticide that can cause mortality. Among the neonicotinoid insecticides, dinotefuran is effective in reducing armored scales, partly because it is most water-soluble and mobile within the host plant. Repeated applications are warranted if dinotefuran is used alone, as the residue of this insecticide doesn’t last long and will not provide adequate longer-term control. Finally, the size of the host plant is an important factor to consider when using insecticides. Again, dinotefuran has shown efficacy against scales on canopies of large trees within a short time (two to three weeks after soil or trunk injection) mostly because it has high water solubility and can move rapidly within the tree. In contrast, neonicotinoids like imidacloprid, thiamethoxam, or clothianidin will require more time (up to two months or more) to show signs of efficacy, as they are relatively less water-soluble and mobile within the tree. For current insecticide recommendations, contact your local UGA Cooperative Extension office.