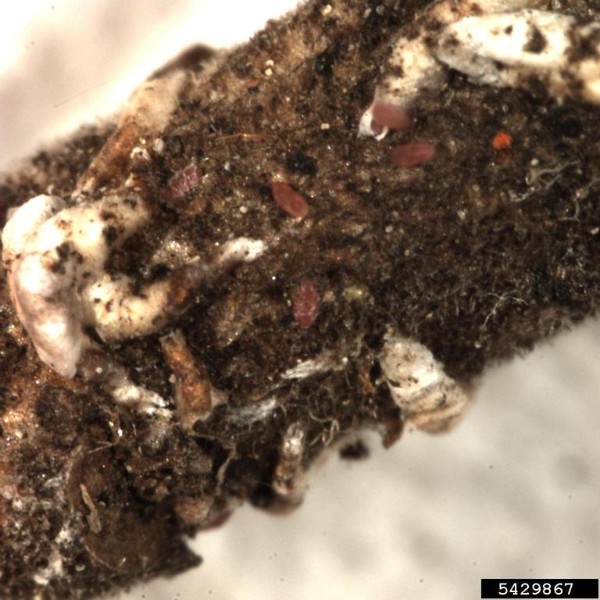 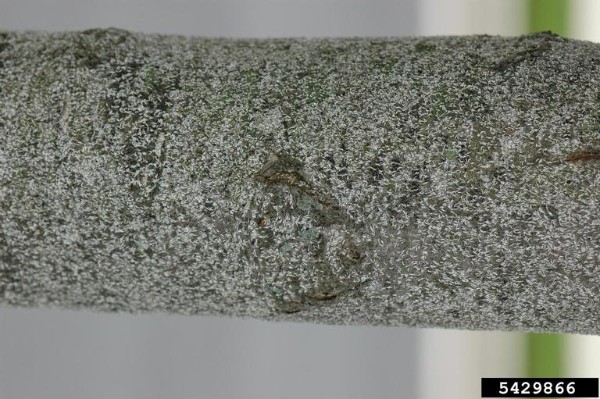 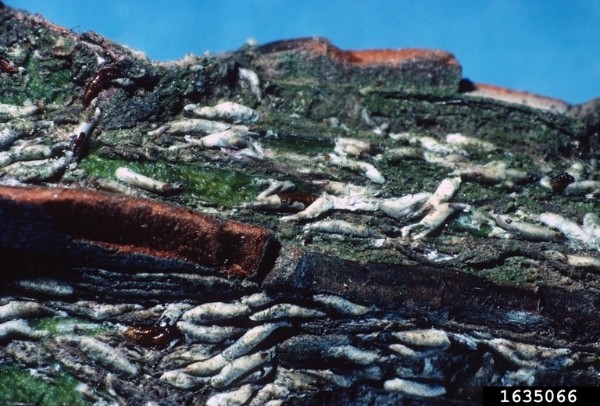 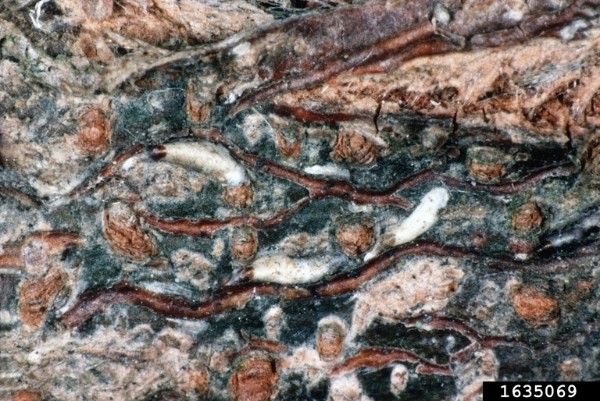 The Japanese maple scale (JMS), Lopholeucaspis japonica Cockerell, is an insect pest of Japanese maples and several other ornamental tree species. This insect sucks out plant juices using its piercing and sucking mouthparts. Because JMS, similar to other armored scales, does not directly feed on the phloem vessels of the host tree, the insect does not ingest excessive amounts of sugars to excrete them as honeydew. Instead, JMS secretes a detached waxy shell that covers the body. Adult male JMS are winged, leave their waxy shell, and are not common. The wingless females are 2 millimeters long and remain under their waxy shell or cover. Female and nymph JMS are lavender-colored and found beneath their off-white, oyster-shell-shaped covers. Females primarily aggregate on tree bark, at the base of branches, and in the cracks and crevices on the bark, although they are occasionally found on the leaves. They often blend in with the colors and patterns of tree bark and are challenging to detect. JMS-infested trees in the landscape reduce the value of the property. In the nursery, JMS infestation affects the marketability of the trees. Branch dieback symptoms appear when the trees are heavily infested.

A female JMS lays about 25 lavender eggs that are found underneath her pale cover. The eggs hatch into tiny, light-purple nymphs that are referred to as “crawlers”. Crawlers are the only mobile stage with legs and antennae. They move around the tree bark and settle on suitable sites by inserting their piercing mouthparts. Once they settle and start feeding, they molt into the immobile nymphal stage and lose their legs and antennae. After molting through two more nymphal stages (third and fourth instars), they develop into adults.

Although males are present, females produce eggs without mating. Within a few months, the population size increases with large numbers of scales on the tree bark. JMS complete two generations in north Georgia, with the first generation from April or May to August and the second generation from August into the following year. JMS overwinter as nymphs on the bark. During the winter, the late instar nymphs blend in with tree bark and easily go undetected. The overwintering JMS nymphs molt into females in early spring and become visible with a white, waxy covering.

Because the nymphs and females of JMS infest the bark, bark ridge, and collars, scouting these areas of the tree will help to identify a JMS infestation. During the growing seasons, the waxy coatings that indicate infestation are clearly visible, however, it can be difficult to see them on light-colored barks. The waxy shield covering on the insect provides protection from external elements including insecticide sprays. But since the crawler stage of JMS does not have this protective waxy cover, the crawler stage is more susceptible to insecticide sprays than other nymphal or adult stages. For this reason, it is critical to determine the peak emergence periods of crawlers, which typically occurs in early spring for the first generation and in midsummer for the second. To this end, systematic monitoring of crawlers is necessary. Wrapping sticky cards or double-sided tape around the tree can help determine crawler emergence activity. The tiny, pale-purple crawlers get stuck to the edge of the sticky surface when they walk over them, and they can be viewed using a 10x-magnification hand lens. Both generations of this pest likely require control actions to be managed.

Managing JMS depends on the type of insecticide being used. Contact insecticides such as horticultural oil and insect growth regulators are useful tools if the JMS-infested bark is adequately covered. For some hosts, effective treatment can be challenging as the bark is hidden by the tree canopy, and penetration can be improved by pruning out select branches. Systemic insecticides such as neonicotinoids can be used for JMS infestations in less accessible situations. In the fall, applying horticultural oil can cause substantial JMS mortality by dissolving the waxy covering and exposing the pest to cold winter conditions. In the growing period, using 2-3% ultrafine oil when applied above 40 degrees Fahrenheit can reduce the survival of the scales. Crawlers should be targeted by these sprays, and some insect growth regulators will affect adult female egg viability. Some neonicotinoid insecticides such as imidacloprid are effective against JMS as they move systemically within the tree. Both fall (root zone drench) and spring applications can be effective. Contact your local county Extension office for current insecticide recommendations.