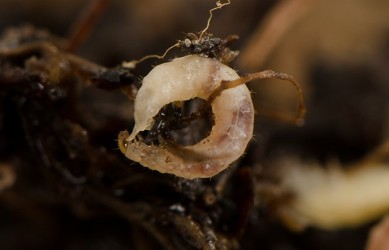 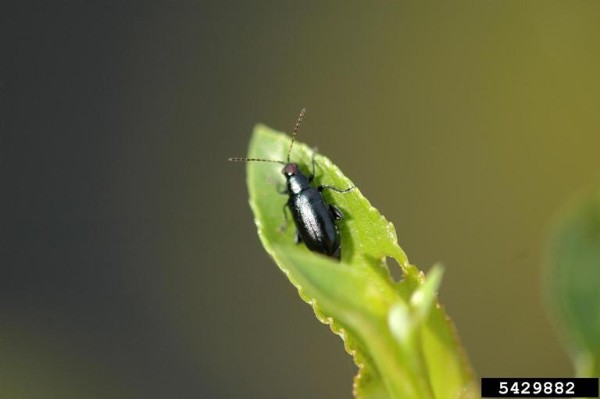 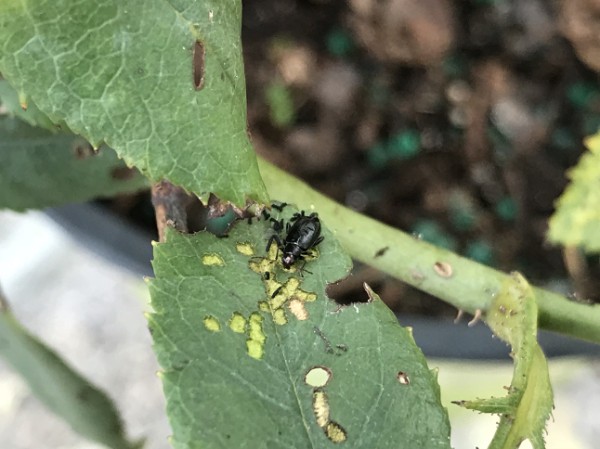 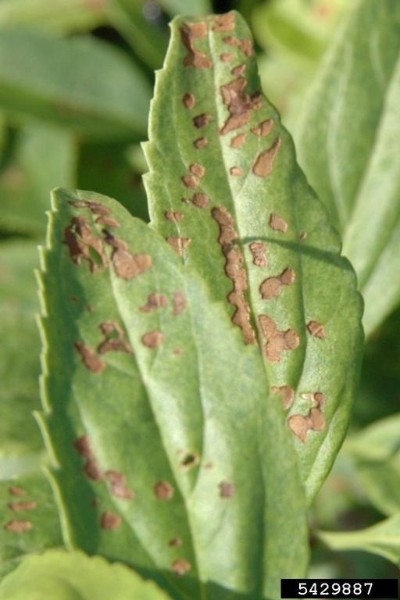 RHFB adults are small, shiny, oval shaped beetles, about 0.2 inches in length, with metallic-black colored bodies and the red-colored head which is a unique identifying character that distinguishes these beetles from other similar species. Females are slightly larger than males. A pair of light-brown serrate antennae originates below the eyes, with dark-brown distal segments. On the last pair of legs, the femur is wider and swollen which enables RHFBs to jump.

As the name suggests, RHFB jumps when disturbed, similar to a dog flea. RHFB is native to the US and is present in the central and eastern US. RHFB overwinters as eggs. In nurseries, adult beetles are first observed feeding on foliage typically during last week of May in most of Georgia, although this could be subject to local weather conditions. After a distinct first-generation emergence in the spring, multiple overlapping generations occur in Georgia until late October. During summer, multiple stages (eggs, larvae, and adults) may be found on an individual containerized plant.

Nursery plants, especially those preferred hosts, should be aggressively scouted weekly for adult activity starting in mid-May preferably during mid-day. Because RHFBs attack volunteer species, weeds also should be scouted. As part of cultural control, removing weeds in and around the nursery could reduce food resources for adult RHFB and prevent population build up in the general area. If the container stock is already infested with RHFB, it is advised not to place newly propagated plant containers near infested stock plants.

As biorational options, microbial biological control agents such as the entomopathogenic nematode (Steinernema carpocapsae) as well as entomopathogenic fungi (Beauveria bassiana and Metarhizium anisophliae) are effective on larval stages of RHFB in containers.

Foliar applications of insecticides are essential to manage adult populations. Depending on the number of invading RHFB adults on plants, multiple applications might be warranted to bring the population under control. There is no threshold determined for this pest as the market is driven by zero damaged plants. Adult RHFB are highly mobile; thus, coverage is important especially when contact insecticides are used for control. For current insecticide recommendations, contact your local county Extension office.

Soil drench application of insecticides in the container can yield acceptable control of larvae if uniform distribution of the insecticide throughout the root ball can be ensured. Soil drench can be applied as preventative treatment in spring if the plants were exposed to adults in the previous season. RHFB larvae can develop within small volume of non-treated soil medium in the container. Even though high larval densities may be present in the soil, it is not certain that all of the adults feeding on the foliage originate from the same container. Therefore, regular scouting and removal of weeds could help reduce the insect load on the desirable nursery stock.