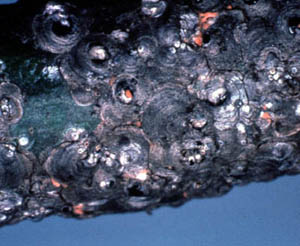 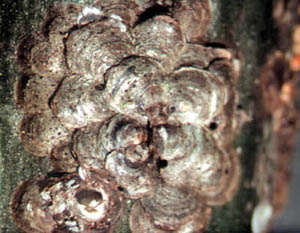 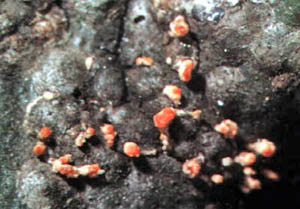 Fully enlarged adult female covers may reach 1/8 inch in diameter. They are circular, brown to gray, slightly convex, with central shed skins that are black when rubbed. Male covers are smaller and broadly oval. This species develops in overlapping aggregations. There is one generation a year. Immatures overwinter and crawlers appear in July.

Look on three to four-year-old branches for overlapping gray scale covers. Scrape off covers to determine viability of a population because covers of dead scales may remain attached. In midsummer, live adult female scales are light purple. Scout in mid-July to determine amount of crawler activity. Look under covers in the dormant season for the small, yellow immatures to see if dormant sprays are needed. Look for holes in covers to estimate level of parasitism.