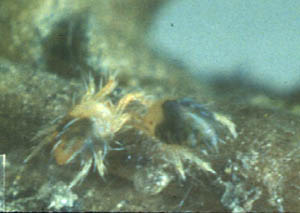 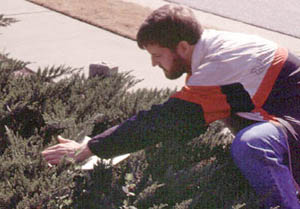 Adults are about ½ mm long. They have eight legs and are yellowish-green when young. When mature and fully fed, they are grayish-black with a tan area behind the mouthparts. Immature forms are smaller and lighter in color. Eggs are oval to circular and reddish brown. There are several generations a year. Eggs overwinter on bark and needles.

At the first sign of stippling on needles, tap branches over white paper and count the dark, slow-moving spider mites. Note the presence of white, fast-moving phytoseiid predatory mites and the minute, black lade beetle mite predators. Concentrate monitoring activities from March through June and September through November.

Spraying is not recommended unless stippling damage exceeds ten percent of green foliage; more than ten spider mites, on the average, are tapped from a tree's branches; and beneficial mites and beetles are not found in all branch samples. Use dormant oil sprays when overwintering eggs are abundant. In the growing season, use summer oil or insecticidal soap sprays if predator populations are present.