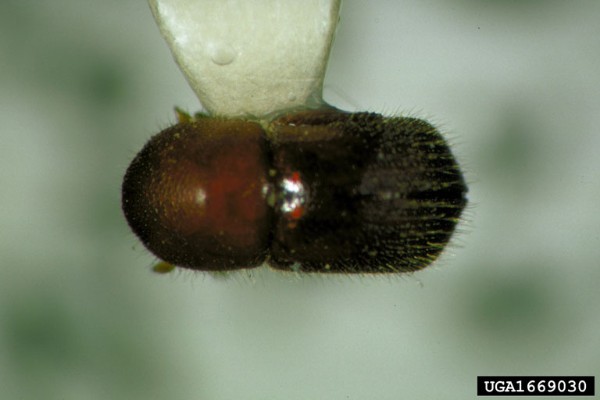 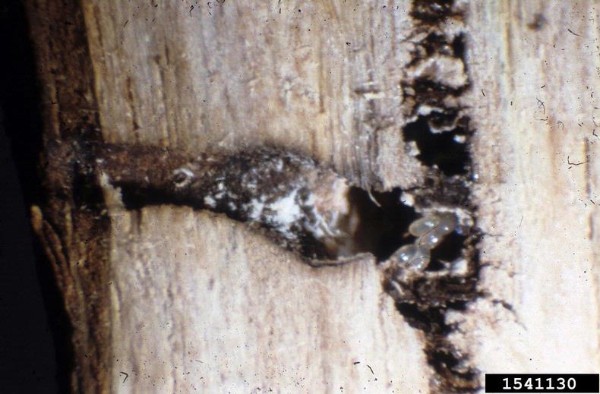 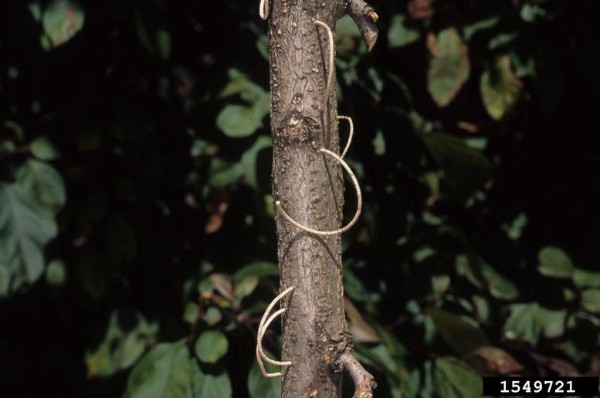 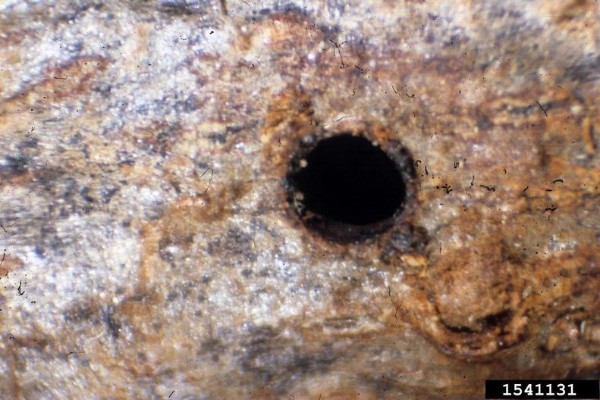 Granulate ambrosia beetle, Xylosandrus crassiusculus (Mot.), is a serious pest of woody trees and shrubs in Georgia. The insect was previously known as the Asian ambrosia beetle. These tiny beetles were first detected in South Carolina in the 1970s and have spread across the Eastern U.S. Woody ornamental nursery plants and fruit trees are commonly affected. In spring or even in late winter (around mid-February), a large number of beetles can emerge and attack tree species, especially when they are young and stressed. Some highly susceptible tree species include Styrax, dogwood, redbud, maple, ornamental flowering cherry, Japanese maple, crapemyrtle, pecan, peach, apple, plum, persimmon, golden rain tree, sweetgum, Shumard oak, Chinese elm, magnolia, fig, Rhododendron and azalea. The female beetles land on the bark of woody trees before boring through the inner bark and softwood of the tree, finally settling in the heartwood where they begin carving galleries.

Female granulate ambrosia beetles commonly attack the trunks of young nursery trees and woody shrubs, although mature trees under stress are also susceptible. They drill a network of tunnels within the heartwood where they lay eggs. Similar to other beetles, granulate ambrosia beetles have egg, larval, pupal, and adult stages. Except for adults, all other stages occur only within the tree trunk. In the galleries, eggs, larvae, and pupae can occur together. Adults introduce symbiotic “ambrosia” fungi into the galleries as a food source for the developing larvae. Adults feed on the same fungi and remain along with their young until they mature and become adults. The female granulate ambrosia beetle is about 2.5 millimeters (mm) long. The young females mate with their male siblings within the galleries. Females can readily fly, whereas the males are flightless and do not emerge from the home gallery. Mated females leave the host trees seeking new trees to invade and lay eggs. They generally attack trees stressed by drought, flooding, and mechanical wounding, but they can also infest trees that are apparently healthy. Infestations are typically found below shoulder height on the tree.

Symptoms of an active infestation include “toothpicks” or strings of sawdust pushed out of tiny pinholes bored in the bark. Trees severely infested with granulate ambrosia beetle may show symptoms of stunting, delayed leaf emergence in spring, and premature defoliation. The toothpicks are delicate and can easily break apart and dissolve with rain or wind. They infest both young and old trees and these damage symptoms can be seen. Attacks on nursery trees or newly transplanted trees are often fatal. Once young trees are infested with ambrosia beetles in the nursery, they can serve as breeding sites for future infestations.

Once adults of granulate ambrosia beetle bore through the bark, there are limited control options to mitigate the problem. Beetles protected in the heartwood of the tree are less likely to be exposed to insecticides. The beetles do not consume the wood, which further minimizes their insecticide exposure, even if using systemic products containing neonicotinoid or diamide insecticides. Pyrethroid insecticides such as permethrin or bifenthrin can be used as preventative sprays to repel invading females and as a rescue treatment if applied quickly after the attack is initiated. Thus, the insecticide application timing becomes critically important for management. The insecticide applications can be properly timed with trap captures or adult activity. The simplest method to determine adult activity in the area is using an alcohol-based trap or a bolt of wood around 2 to 4 inches in diameter and 2 feet long. Any hardwood species such as maple will work for building traps. A half-inch diameter hole drilled down the center of the bolt as deep as possible is filled with alcohol and the opening closed using a stopper cork. Ethyl alcohol (greater than 70%) can be found at most liquor or drug stores. The denatured version found in drug stores also works, but rubbing (isopropol) alcohol does not. In a pinch, hand sanitizer with 75% ethanol content can serve as a substitute. Hang several bolt traps along the woodland border of a nursery at waist height to determine beetle emergence and activity. Sawdust toothpicks will begin to appear on the bolt of wood when they are infested with adult beetles. Once sawdust toothpicks are detected on a bolt trap, daily scouting should occur on nearby trees.