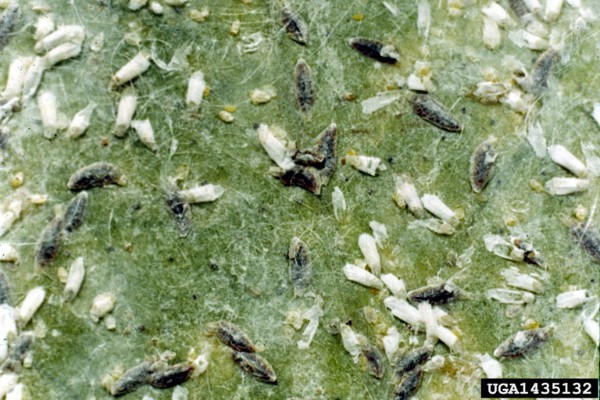 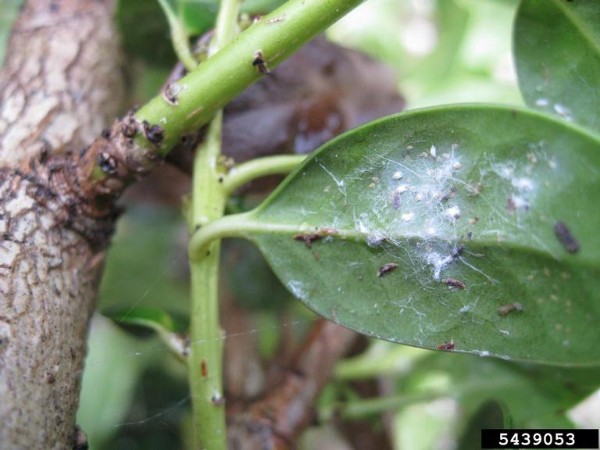 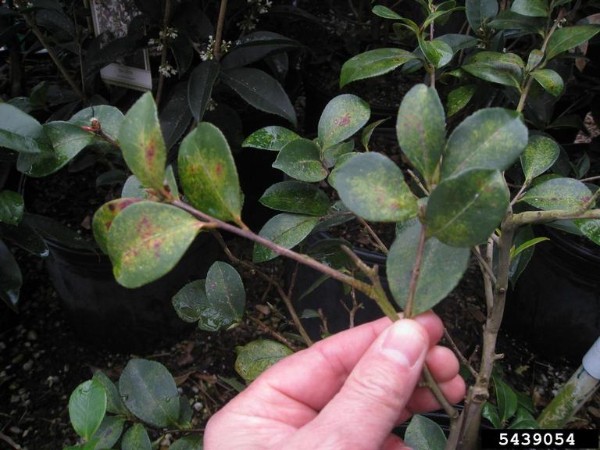 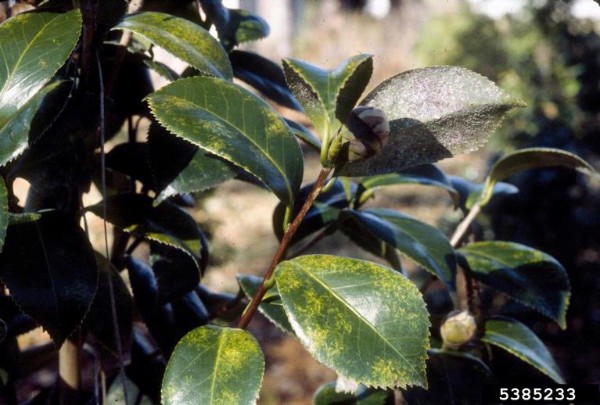 The tea scale, Fiorinia theae (Hemiptera: Diaspididae), is a serious economic pest of several ornamental plants in nurseries and landscapes in Georgia, including camellias and hollies. Tea scales are armored scales that cause chlorosis (yellowing) of the leaf tissue, and under severe infestations, they can cause plant death. These pests undergo multiple overlapping generations per year and are very challenging to control. Even after control measures are administered, the plant retains the damaged leaves for at least a season. It usually takes two to three years to bring the infestations under control after the application of effective insecticides. The tea scale is an invasive pest native to Asia and is thought to have been introduced into the U.S. in the early 1900s. It infests numerous plant species throughout the warmer regions of the world, and in the U.S., its range spans Florida, Georgia, South Carolina, and Louisiana in the Southeast to Texas and California in the West. It mainly causes economic losses to camellias and hollies. In India, where it was first described, it has been reported on tea (Camellia sinensis), olive (Olea europaea), and citrus (Citrus spp.).

The tea scale’s rate of growth and development varies with the prevailing environmental conditions. It completes a life cycle in 45 to 65 days, depending upon temperature. In Florida, it is active throughout the year, but in the colder regions of Georgia and South Carolina, fewer generations are observed in a year. An adult female tea scale lays two rows of 10 to 15 eggs under the scale covering, and the eggs hatch within two weeks. Immature scales undergo three nymphal stages. Newly hatched nymphs, called crawlers, move from one plant to another by wind and by crawling. Within a week, crawlers insert their piercing and sucking mouthparts into the succulent plant tissues underneath the cuticle and become immobile. After 10 days, the crawlers molt into the second nymphal stage. After that, they lose all appendages (legs and antennae) and remain immobile. Females retain the skin from the first molt, which becomes sclerotized (hardened) over time and gives the adult female its characteristic brown color. The adult females are about 2.5 millimeters long. The nymphal stages of males are initially yellow, but as they grow, they secrete a thin, soft, white waxy shield. Adult males develop wings and non-functional mouthparts. Adult males are usually smaller than females.

Tea scales use their mouthparts and pierce plant tissues from the underside of leaves and suck the sap, causing chlorosis or yellowing on the upper leaf surface. Infested plants look unhealthy, and with fewer and smaller blooms. Under heavy infestations, white, cottony filaments can be seen hanging from the leaves and dead twigs, sometimes causing the death of the plant. Dead scales and damaged leaves remain on the plant for a season or two, making the plant aesthetically unappealing to consumers.

Several parasitic wasps have been found parasitizing tea scale in Georgia and Florida, including Aphytis diaspidis and two species of Aspidiotiphagus spp. Before making insecticide applications, growers should ensure that scales cannot be naturally managed by native parasitic wasps. Parasitized scales have detectable holes chewed out of their armors by the emerging parasitic wasps, and holes are surrounded by patches of necrotic tissue. Low to moderate levels of infestation can be easily controlled with horticultural oils. However, in most cases, the damage exists before the scale infestation is discovered. Insecticide applications should be started in early spring (April) to coincide with emergence. Insecticides are most effective against the crawler stage. Tea scales are often tough to control for the following reasons: they infest the underside of the leaves, they reproduce continuously during warmer months, and their waxy armor impedes chemical penetration. Adding an adjuvant to the spray mixture and directing the spray towards underside of the plant foliage will increase the effectiveness of chemical control. For lasting results, foliar application using contact insecticides should be repeated two to three times at a seven-to-10-day intervals. Among systemic insecticides, dinotefuran is effective, but multiple applications are required because dinotefuran has short residual activity. Pruning could be a very effective tool against this pest, as it improves both insecticide exposure and air circulation. If insecticides are used, always read and follow label instructions. It is the law. Contact your local Cooperative Extension office for specific insecticide recommendations.