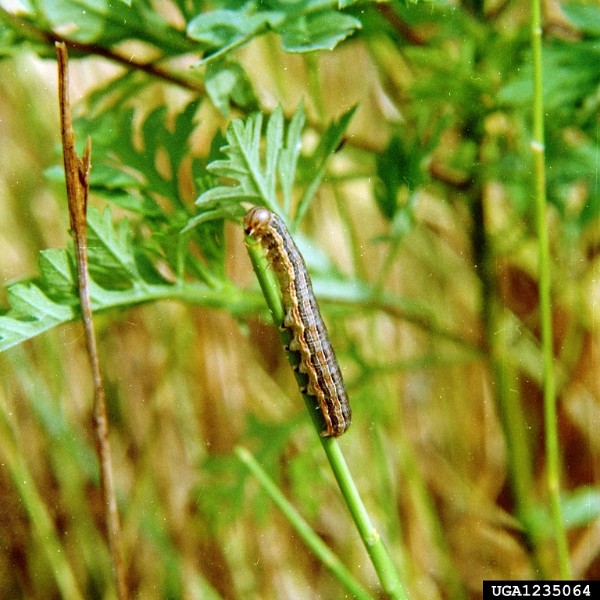 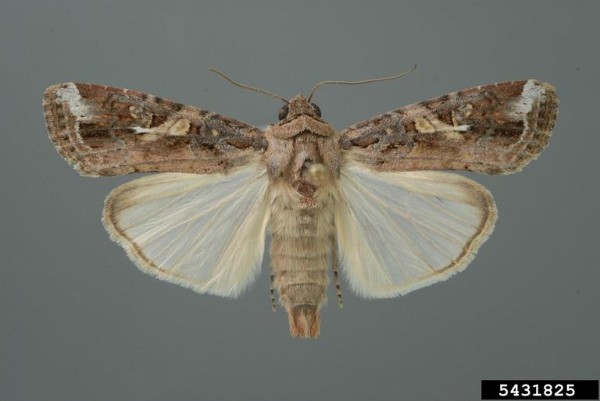 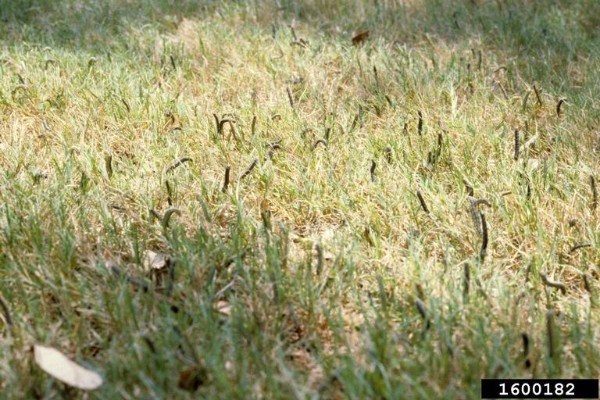 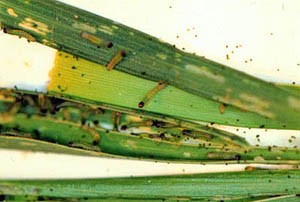 The fall armyworm is the caterpillar of a moth that arrives in Georgia almost every year. Even in relatively mild years, the moths, or adults, do not survive our winters. Instead, moths move north from Florida each spring and summer on weather fronts, spreading from south to north until the entire state is reinfested. This process takes several generations of moths, which is why the worms usually appear in late summer and early fall in northern parts of the state.

An armyworm moth can lay eggs in batches of a few dozen to several hundred, allowing populations to grow rapidly throughout the summer. These eggs hatch after a few days and the caterpillars feed and grow for two to three weeks before pupating. A week or so later, the new adult moth emerges to start the cycle again. In the warm weather of summer, the cycle takes about four weeks to complete with 14 to 17 days spent as caterpillars feeding on the grass. This means that for armyworm-infested grass that has been established for four to five weeks or more, it is unlikely that the worms would have come from eggs laid at the production field.

Unless nearby grass is infected, if infested sod has been in place for less than 14 days, the worms potentially came from the farm. Armyworm moths are ubiquitous and do not discriminate between urban areas and rural areas, where most sod farms are located. This simply means that armyworms are likely to be present anywhere in Georgia and are not concentrated in turfgrass production fields, which makes identifying the origin of infestation difficult when worms are noticed two to three weeks after establishment. At that point, the size of the worms is important. If “big” worms (greater than 3⁄4 inch) are observed within 14 days after planting, they likely came with the sod. However, if “small” worms are feeding on the grass, it is more likely that eggs were laid by adults after the grass arrived onsite.

Sod producers have a couple of options to prevent armyworms from being shipped with the grass. First and foremost, crew members should know what armyworms look like and be aware of possible infestation as they are mowing, harvesting, or handling sod. It is especially important to check the field before harvest to be sure that there are no armyworms present. If the grass has ragged leaves or areas with stripped stems, the sod should be tested to confirm the presence of armyworms. To test, simply pour soapy water on the spot to bring the worms to the surface. Birds spending time in some areas of the field and not others may also be an indicator of armyworm activity. Large armyworms are fairly easy to find. In addition to their size, they are more active during the day and their droppings, called “frass,” are usually obvious in areas where they have been feeding. Small worms tend to stay down in the canopy during the day, and their feeding is less damaging and harder to see. Typically, growers do not ship sod with medium to large worms. However, the smaller worms may not be noticed in handling and can make it into a shipment.

Insecticidal control of caterpillars in turf and sod is not complicated, and when armyworm populations are high, applying insecticide immediately following turf installation is recommended. There are a number of effective and relatively inexpensive products. Others are more expensive but offer better control of larger worms, and a few insecticides offer long- term protection at a premium price. Consult the commercial edition of the Georgia Pest Management Handbook or refer to your local county extension agent for more specific insecticide recommendations.

Insect growth regulators (IGR) are also available for use on turfgrass. They provide a different approach to insect control. Some are active only on caterpillars, and others have a broader spectrum and affect a range of different insects. The IGRs stop the development of immature insects so that they cannot grow and turn into adults. Many are absorbed into the grass and remain active but do not move into new growth. Some sod producers have begun treating sod with IGRs before harvest as a preventative measure to keep any small worms from developing. They are safe for nonarthropod animals including sod harvesters, landscape installers, and customers.

Keep the life cycle of the fall armyworm in mind when handling complaints. Sod that has been established for months before becoming infected with armyworms is not the responsibility of the sod producer or installer. Armyworm moths are continuously flying and are attracted to young succulent grass, so infestations of newly sodded lawns are common for 30 to 60 days after establishment. The practices associated with establishment, like irrigation and nitrogen fertility, promote growth characterized by succulent leaves. If armyworms are identified and controlled early, turfgrass recovery can be expected without needing to replace the sod. Caterpillars that show up within a three- to four-week timeframe are of uncertain origin and may require some compromise to maintain customer satisfaction. As fall approaches, the armyworm life cycle typically lengthens, changing developmental timing. Similarly, shorter days and cooler temperatures slow turfgrass growth.