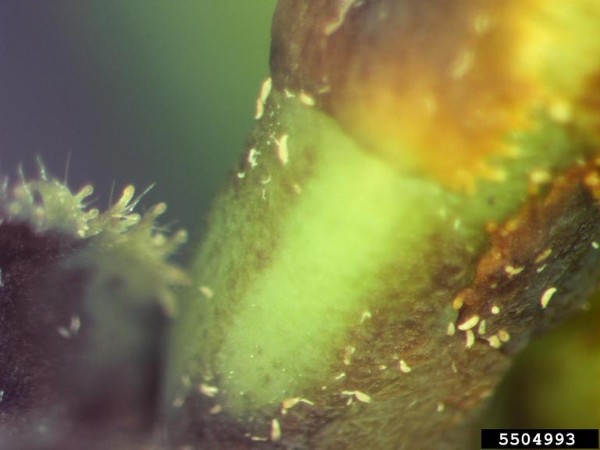 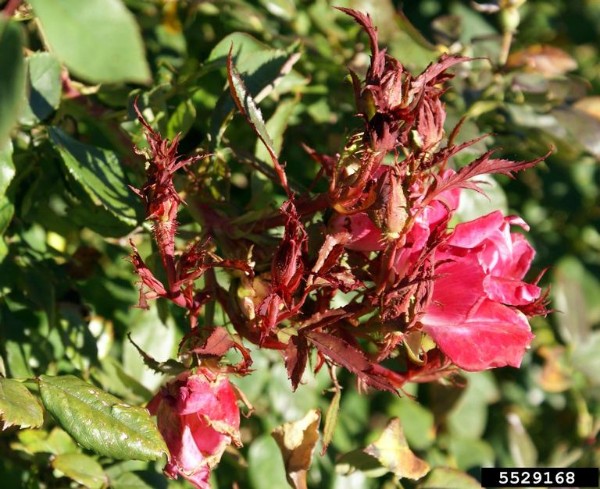 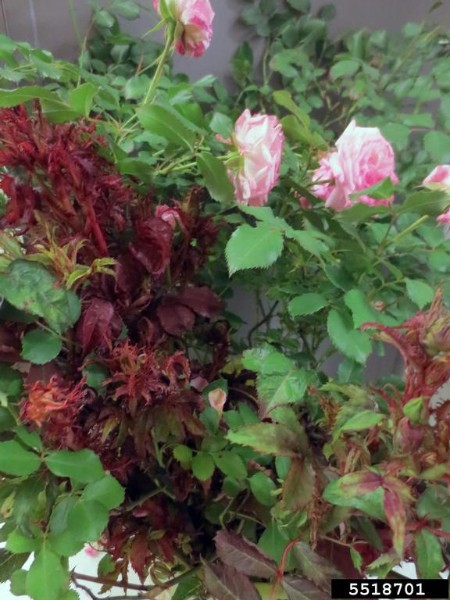 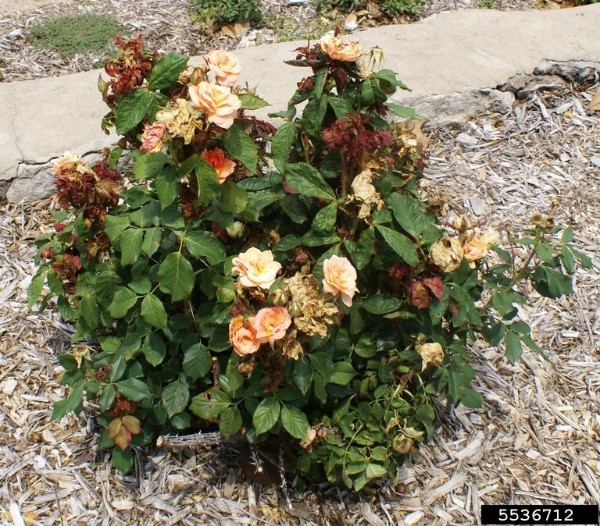 In the 1800s, the multiflora rose was introduced into the U.S. from Japan, China, and Korea. Beginning in the 1930s, the U.S. Department of Agriculture encouraged the use of multiflora roses because they were said to be ideal for erosion control and living fences, making them a popular choice for planting throughout the U.S. It wasn’t until the 1950s that these multiflora roses were recognized as invasive weeds. There was a need for biological control for the multiflora rose as it started to take over much of the landscape in many states. References to witches’ broom and rose rosette disease (RRD) were found, which led to the possibility of a biological control agent, the eriophyid mite—Phyllocoptes fructiphilus. The eriophyid mite was discovered in the 1940s when diseased rose plants were first observed in both California and Wyoming. These mites (P. fructiphilus) were found to be associated with RRD. Not much information is known about these mites and how they transmit the virus and cause RRD, but studies are underway to understand the mite’s biology and how it transmits the disease.

RRD vectored by eriophyid mites can cause major problems for nurseries, landscapers, and gardeners alike. The spread of this mite and virus can cause serious damage to plants, decreasing profits for nurseries and landscapers. The virus causes the plants to become undesirable and will eventually result in the death of the plant, which affects all segments of the rose industry as well as rosarians and home gardeners. RRD is caused by the rose rosette virus (Emaravirus) that affects multiflora and ornamental roses. This virus is causing devastation to roses in several regions of North America, but it is particularly problematic in the eastern half of the continent. It has been estimated that about 93% of rose plants that are susceptible to this disease have the potential to be killed in a matter of decades. The symptoms of disease on ornamental roses are a yellow mosaic pattern appearing on leaves, increased thorniness, abnormally shaped foliage and early production of lateral buds that make up the witches’ broom. The symptoms differ slightly in multiflora roses. These roses still get witches broom and misshapen foliage. Unlike the ornamentals, they get a reddish-purple vein mosaic pattern on their leaves and produce bright-red foliage and lateral shoots. The disease eventually results in death of the infected plant.

The eriophyid mite (Phyllocoptes fructiphilus) is miniscule in size, measuring about 140 to 170 micrometers long, and is tapered at both ends. These mites have only two pairs of legs, whereas non-eriophyid adult mites have four pairs. They have a subtriangular shield that tapers out to a point approaching the anterior end. This shield, on the mite’s ventral side, allows distinction among species. The eriophyid mite (P. fructiphilus) lifecycle begins with an egg. After about four days, the larva emerges. The mites are transparent, becoming white and slightly translucent as they develop through two larval stages. Mites reach adulthood about one week after hatching and molting through two larval and a nymphal stage. As they reach adulthood, they start to become yellowish in color. The eriophyid mites (P. fructiphilus) are haplodiploid, which means that they can develop from a fertilized or unfertilized egg. A male mite will release spermatophores and when a female finds it, she can pick it up through the genital opening and store it. The female can choose whether or not to fertilize an egg. If the egg is fertilized, the offspring becomes a female; if the egg is not fertilized, it will become a male. Once females reach adulthood, they lay one egg a day for a few days. Their total lifespan is about 11 to 12 days. Their population builds from midsummer into September and October. During the fall months the mites begin to look for areas within the plant to overwinter such as inside the ovary of the rose fruit. It is assumed that eriophyid mites (P. fructiphilus) use wind to move from plant to plant. They have been observed to go into a dispersal mode where they stand straight up on their tail end, perpendicular to the plant, and catch a ride in the air current. There is no other known means of movement from plant to plant. Although eriophyid mites have been found on symptomatic roses as well as healthy plants, the numbers are usually very high on symptomatic roses.

Eriophyid mites (P. fructiphilus) infected with the virus transmit the virus through feeding. Once plants are infected with the virus, they cannot be treated or cured. Disease management relies on early detection and cultural control. Infected plants should be identified early, removed immediately, and replaced. If a rose is planted, then neighboring plants next to the roses need to be plants that are not affected by the virus (non-host plants of P. fructiphilus). This will slow the spread of the mites from plant to plant in that general area. It is important to note that eriophyid mites are dispersed by wind, so plants that appear healthy and were planted near the diseased plants may have the virus but may not yet be showing symptoms. The interval between infection and symptom development is unknown. Miticides are not recommended for eriophyid mite control because the effectiveness of potential miticides is still not proven. The miticides registered for spider mites may not control this eriophyid mite. Lack of miticide efficacy could be related to their small size and feeding habit as they feed and develop in concealed areas of rose flower bud, such as sepals, which can pose serious challenges without adequate exposure.