Georgia is home to over 50 species of fireflies, more than any other U.S. state. Also known as lightning bugs, the insects’ “dancing light” patterns are an important, and nostalgic, part of Georgia summer evenings. To protect fireflies and ensure that we continue to enjoy their presence in the landscape, it is important to understand their lifecycle and habitat needs.

Fireflies belong to insect family Lampyridae. They are not true flies but nocturnal beetles. The often bright light—bioluminescence—produced by adult  fireflies is from light-producing lantern organs in their abdomen. Chemicals, such as luciferase and luciferin, work with other substances in the insect’s  body to produce light very efficiently, without generating heat. The light flashes can vary from yellow to green colors, depending on the species. The air temperature can influence the frequency of flashing. The interval between flashes is generally shorter with warmer temperatures.

The flash patterns of fireflies are unique to each species and allow these insects to locate potential mates. In general, the males flash as they fly while the females flash as they wait in tall grass or other plants. Keep a lookout for flash patterns of various species occurring at a specific time of night and specific time of year. For example, Photinus carolinus is a species known for its synchronous flashing, blinking, and becoming dark in unison. These are found as the evening becomes dark during the summer in areas around the Great Smoky Mountains National Park.

The most common species in Georgia is Photinus pyralis, or the common eastern firefly. Aside from having the lantern organs on the underside of the abdomen, the Photinus pyralis has a pale border around each outer wing (elytra) and a shield plate  that covers the  top of  the insect’s head. 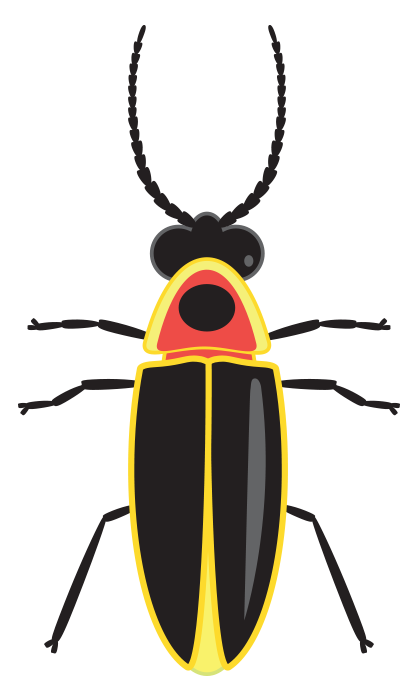 Common eastern firefly males can be seen in  midsummer at dusk showing a J-shaped flash.  They start out flying low to the ground and fly higher in the trees as the evening becomes darker.

The females remain stationary resting on low vegetation. Females respond to the male flashes with a short flash of their own. Once a mate is found through tracking flash patterns, mated females generally deposit eggs on the ground, under mulch, around log bark, or among other moist forest debris.

In approximately  three weeks, the eggs hatch into insect larvae that are often luminescent (glowing).

The larvae feed on soft-bodied invertebrates such as slugs, grubs, or earthworms. The crawling soft-bodied predators transition into a pupal stage (a case-like structure similar to a cocoon) and emerge in midsummer to begin the lifecycle again. 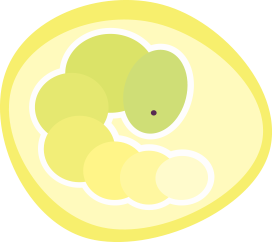 Other common firefly species found in Georgia include little gray (Photinus marginellus), Mr. Mac (Photinus macdermotti), and spring four-flasher (Photuris versicolor var. quadrifulgens). The adults of many species feed on nectar and likely help with pollination in gardens. The tall flowers, grasses, and shrubs in your pollinator garden can serve as a safe place for females waiting for males. Fireflies are in adult form for only a few weeks, although the entire lifecycle can take one to two years.

To provide habitat for fireflies in your landscape, consider implementing the following:

Understanding the lifecycle and habitat needs of fireflies can help increase the population in your landscape, allowing you to enjoy their light show during the summer.