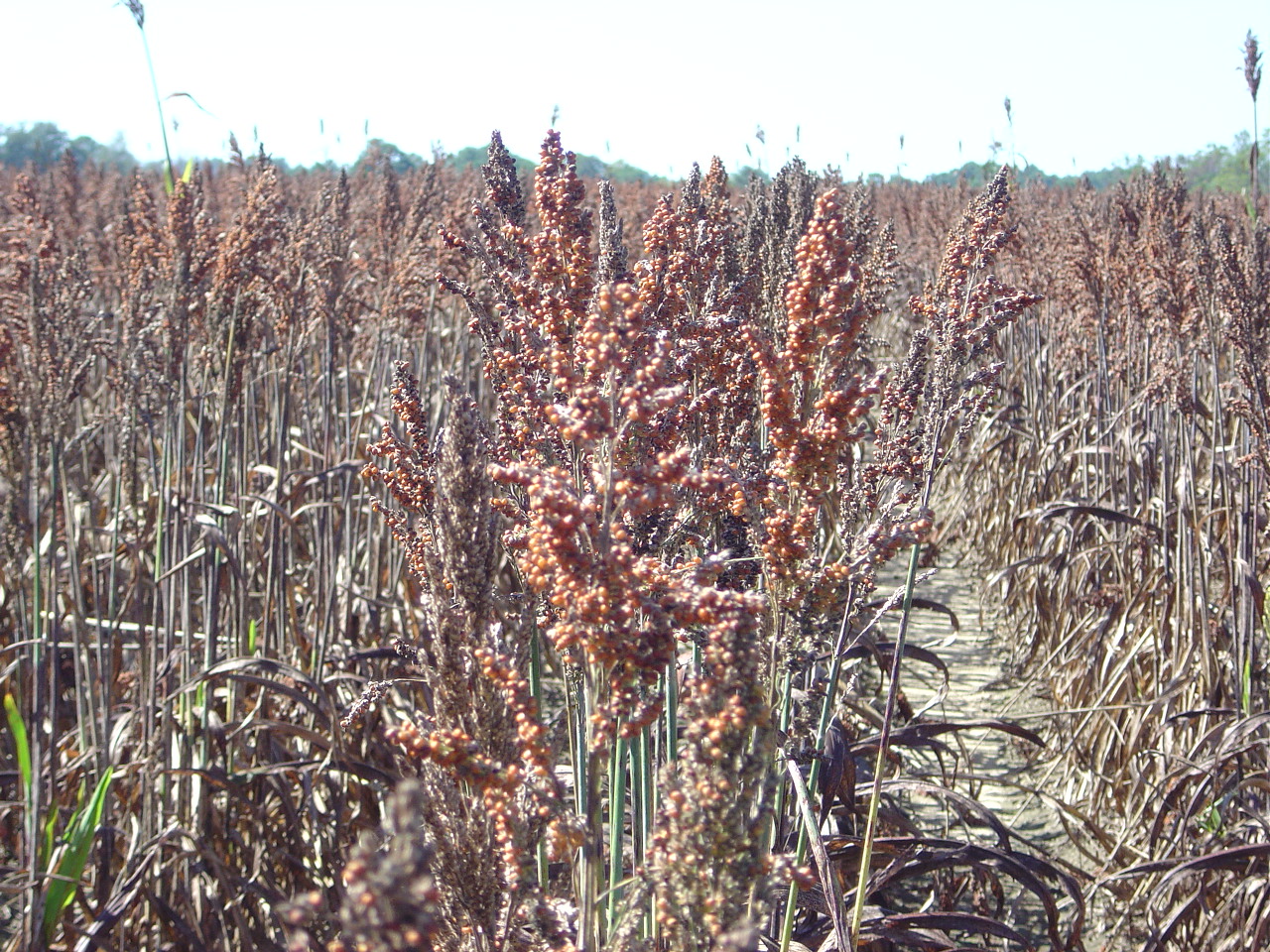 Compared to other grains, grain sorghum has unique characteristics that must be understood before successfully harvesting, drying and storing it. With some modifications, you can use existing equipment for both sorghum and other grains.

Grain sorghum plants mature when the moisture in the grain drops to about 30 percent; however, the seed are usually too soft for harvesting when moisture content exceeds 25 percent. Attempts to harvest above 25 percent moisture will usually produce either unthreshed heads or cracked grain. The optimum harvest moisture, about 20 percent, minimizes harvest losses and drying expense.

Because field drying is difficult and leads to excessive field losses from birds, wildlife and lodging, harvest early and dry your sorghum mechanically to maintain quality and minimize harvest losses.

You can harvest sorghum using row crop or sickle bar headers. Raise the header high enough to harvest only the grain heads with a minimum of leaves and stalks.

Combine header losses are usually less at a speed of 2.5 to 3 miles per hour; however, this speed may exceed the capacity of the combine rack and shoe if the stand is dense. In this case, you might want to take a partial swath to prevent overloading and still maintain field speed.

Set combine reel bat speed 15 to 25 percent faster than ground speed to minimize losses. Set the reel height high enough to avoid catching under and throwing the grain heads on the ground. You may need wide reel bats if plant height varies greatly.

Set your combine cylinder and concave to separate the seed from the head without over-threshing. The cylinder speed for sorghum should be less than that for wheat. Some combine manufacturers recommend removing concave bars. Concave clearance should be about 1/2 inch in front and about 3/16 inch at the rear. Clearance for rotors in rotary combines is usually greater. See your combine instruction manual for details about adjustments.

Grain sorghum stalks contain more moisture and are smaller than most corn stalks. As a result, grain sorghum stalks are more likely to be chopped up and carried to the grain tank. Pieces of stalk returned to the cylinder in the tailings will be further ground into fines. The chaffer extension can be closed to prevent this material from entering the tailings conveyor. Sorghum stems often catch and choke the straw walkers, which may cause inconvenience and lost time. Some manufacturers make straw walker covers with smaller holes that stop stems while allowing the grain to drop through.

Inspect sieves often during operation to check for matting or clogging. Set the upper sieve 1/2 to 2/3 open with the lower sieve 1/3 to 1/2 open.

Holding High-Moisture Sorghum ahead of the Dryer

Since high-moisture sorghum packs tighter than high-moisture corn, air circulation is inhibited and heating problems may result. If the sorghum is near 25 percent moisture and grain temperature is 80 to 90 degrees Fahrenheit (°F), begin drying the grain within four hours. These conditions may cause heat, molding and sprouting. Aeration in wet holding bins at the rate of ½ cubic foot per minute (cfm) per bushel can be beneficial if nighttime temperatures drop 10° to 20° F below daytime averages. However, if the temperature does not drop, little benefit will result other than a slight amount of evaporative cooling.

Sorghum has more trash mixed in the grain after combining than any other common crop. If harvested prior to frost, pieces of green stems and foliage often mix in with the grain. This foreign matter is difficult to remove before drying. Trash in the dryer can be a fire hazard and offers resistance to air movement. Inspect dryers to make sure all parts unload properly, and do not run dryers unattended for long periods of time. Trash pulled into the dryer air intake often causes fires. Trash in the dryer air intake is carried through the flame and deposited, still glowing, in the plenum chamber and possibly in the grain. You may prevent this from happening by keeping the ground clean near the dryer air intake. The intake may also be shielded with a wire screen that keeps the trash out. The screen should not be finer than ¼ inch mesh or air movement may be restricted. Trash may also blow under the bin drying floors and sift through perforated floors, creating a fire hazard.

Trash is usually removed from the grain by sifting through a screen or sieve. The seed fall through while trash remains. Most rotary drum cleaners are designed to retain the seed and drop the fines. Removing fines often overloads the take-away conveyors when you clean sorghum. With rotary screens, the grain falls through and trash is retained, requiring a means to catch the portion that would normally be the fines in a normal cleaning operation.

Dryers do not force air through grain sorghum as easily as through corn because the smaller grains leave less space for air movement. The kernels are small, the moisture content is usually high and the resistance to air flow is extremely high. As a result, grain sorghum dries only about 2/3 to ¾ as fast as corn under the same drying conditions. 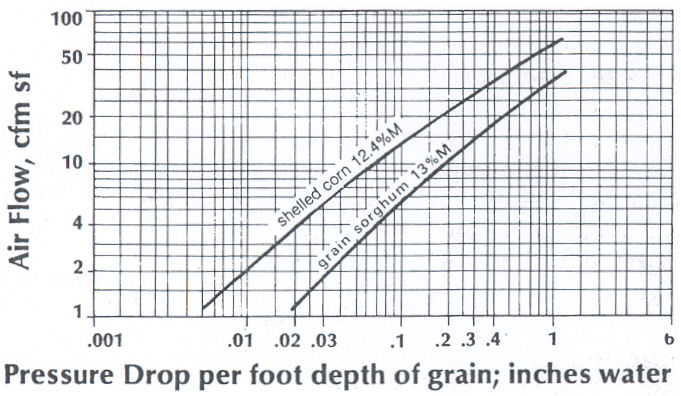 The resistance to airflow through grain sorghum is about 2½ times greater than that for corn, which means more static pressure is needed (from the fan) to dry sorghum than to dry corn. In practice, you can use the same fan; however, sorghum will dry more slowly than corn.

If you have in-bin corn drying equipment, you must decrease the grain depths to handle grain sorghum. Unfortunately, in-bin corn drying equipment is not adequately designed to handle corn on many Southeastern farms. Ideally, any method used for drying shelled corn should also work for sorghum; however, if equipment can?t handle corn, it can?t handle grain sorghum either. Check airflow capacities and fan sizes before you commit to drying your crop. Remember, the drying time for sorghum and corn should be the same if the capacity or volume of grain is reduced 25 to 40 percent.

Limit the drying temperature to 110°F if grain sorghum is to be used for seed. If used for feed grain, you can dry sorghum at 140°F or less for batch-in-bin systems using air flows of 10 to 25 cubic feet of air per minute per bushel (cfm/bu). Batch or continuous flow dryers using air flows of 100 to 200 cfm/bu can successfully dry sorghum at temperatures up to 200°F. Avoid drying sorghum in deep layers since the top layers may mold. Sorghum that is to be held in storage for 12 months should be dried below 12 percent moisture.

Sorghum placed into dry storage should be cleaned and spread mechanically to distribute the dust and fines as well as any remaining trash. Aeration in storage is essential for safe storage, and the aeration rate should be a minimum of 1/10 cfm/bu. Airflow through sorghum will be less than through corn or soybeans because of greater airflow resistance. Airflow for aeration is not as critical as airflow for drying. Since air does not flow as well through sorghum, check the grain more often when you aerate.

Grain stored in metal tanks can spoil in storage even if the grain was originally dried to the recommended level. Spoilage may be caused by moisture migration, fine material, and insects and molds, all of which are directly affected by moisture.

Grain harvested in the summer or fall and placed in storage produces air currents within the tank that produce moisture condensation. This process can occur within a completely enclosed and sealed tank and is caused by temperature differences within the grain. As the outside air temperature decreases, the bin walls cool and, as a result, cool the grain layer near the walls and roof. Air next to the walls cools, becomes dense and settles. As this occurs, the central bin air becomes light and rises. As this warm moist air continues to rise, it comes in contact with the cold roof and condenses. This condition (called “moisture migration”) creates a wet zone in the top of the tank (Figure 2). Mold and insects thrive in these warm, moist areas. 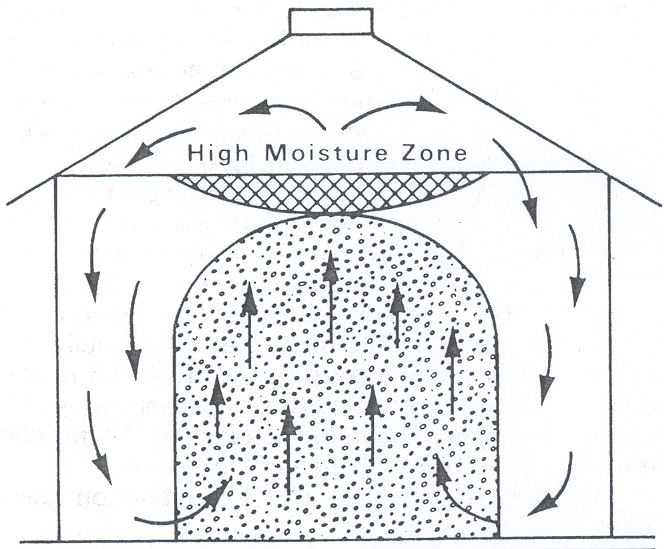 Moisture migration can be prevented in grain tanks by forcing low volumes of air (1/10 to 1/4 cubic foot of air per minute per bushel of contents) through the tank contents. This process, called aeration, produces uniform temperatures throughout the mass.

Install aeration fans to draw the cold air down through the grain, reversing the natural trend of the warm air to rise. Drawing the cold air down discharges the warm, moist air to the outside and prevents condensation on the top surface of the grain.

Begin fan operation as soon as grain is placed in storage and operate it whenever the relative humidity is below 60 percent and the warmest grain is 10°F warmer than the outside air. Do not operate fans when fog, rain and high humidity exist. In late fall and winter, use the fans during daylight hours when the humidity is near or below 60 percent. A grain temperature of 50°F is generally satisfactory. Grain stored for more than one year should be cooled below 50°F if possible to provide better insect and mold control.

You can use high-volume drying fans operating two to three hours several times a week when the relative humidity is near or below 60 percent to aerate grain. Air forced upward through grain in high volumes usually does not cause moisture to accumulate in the top layers. Do not use heat when aerating -- the objective is to cool the grain.

Regular inspection of grain tank contents is a must for successful management. Inspect the grain for moisture, insects and spoilage at least every 30 days.

Many Georgia farmers use grain augers that are 40 to 60 feet long to place grain in metal bins from the top. Many accidents occur when these long augers are being moved from one bin to another without lowering the upper end. Generally, two people hold the auger while moving it. If the upper end touches an overhead power line, both people can be electrocuted. To avoid possible electrocution, consider installing underground electrical service or work with your local utility to move electrical wires that are dangerously close to metal grain bins. 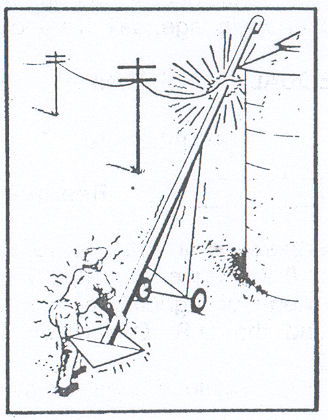