4-H began as a simultaneous response to needs throughout the country. The goal of the program was to extend agricultural education to rural youth by organizing boys and girls clubs and through "learning by doing."

The image on the right highlights key times in 4-Hs +100 year history.

The roots of 4-H began at the turn of the century when progressive educators started to emphasize the needs of young people and to introduce nature study as a basis for a better agricultural education. Boys and girls clubs and leagues were established in schools and churches to meet these needs.

Most states organized clubs outside the schools with rural parents acting as volunteer leaders and County Extension agents provided materials. Farmers saw the practical benefits and public support and enthusiasm for 4-H grew throughout the nation.

Early Development of 4-H in Georgia

When most of Georgia was farm land and most Georgians made their living on the farm, Mr. G.C. Adams, school superintendent in Newton County, dreamed of a place for young boys to learn all they needed to about their future career in farming.

To help his students prepare for the future, Mr. Adams began the first Georgia Boys Corn Club in 1904. In this early club, boys planted and cared for their crop, and exhibited at the fair.

Just southeast of Newton County, another milestone in Georgia 4-H history was growing. Like the boys in Newton County, the girls of Hanock County wanted an opportunity to be part of an educational club and thus the Girls Tomato Canning Club began in 1908. The girls grew tomatoes in their family vegetable gardens and canned them for competition.

Soon boys and girls all over Georgia were joining corn and tomato canning clubs and the beginning of what we now call Georgia 4-H was on its way.

Ties to Formal Education and U.S. Department of Agriculture (USDA)

By 1912, virtually all of the land-grant institutions in the southern states had signed cooperative agreements with the USDA and had organized Extension departments.

Congressional appropriations to the state land-grant institutions began in 1912 for development of early Extension work within the states.

In 1914, congress passed the Smith-Lever Act, which established the Cooperative Extension Service within the USDA, the state land-grant universities, and the counties.

We thank Senator Hoke Smith from Georgia and Representative Ashbury Leaver from South Carolina for their work to bring a new kind of "teacher" -- a County Extension Agent -- to each county in our state.

Since the early legislation Congress has continued to support 4-H.

The first use of the term "4-H Club" in a federal document appeared in 1918 in a bulletin written by Gertrude L. Warren. By 1924, wider usage of the name "4-H" was adopted. This was used thereafter throughout the world.

The first emblem design was a three-leaf clover, introduced by O.H. Benson, sometime between 1907-08. From the beginning, the three "H's" signified Head, Heart and Hands. A four-leaf clover design with H's appeared around 1908.

In 1911, Benson referred to the need for four H's -- suggesting that they stand for "Head, Heart, Hands, and Hustle. . . head trained to think, plan and reason; heart trained to be true, kind and sympathetic; hands trained to be useful, helpful and skillful; and the hustle to render ready service, to develop health and vitality. . . "

In 1911, 4-H club leaders approved the present 4-H design. O.B. Martin is credited with suggesting that the H's signify Head, Heart, Hands and Health -- universally used since then. 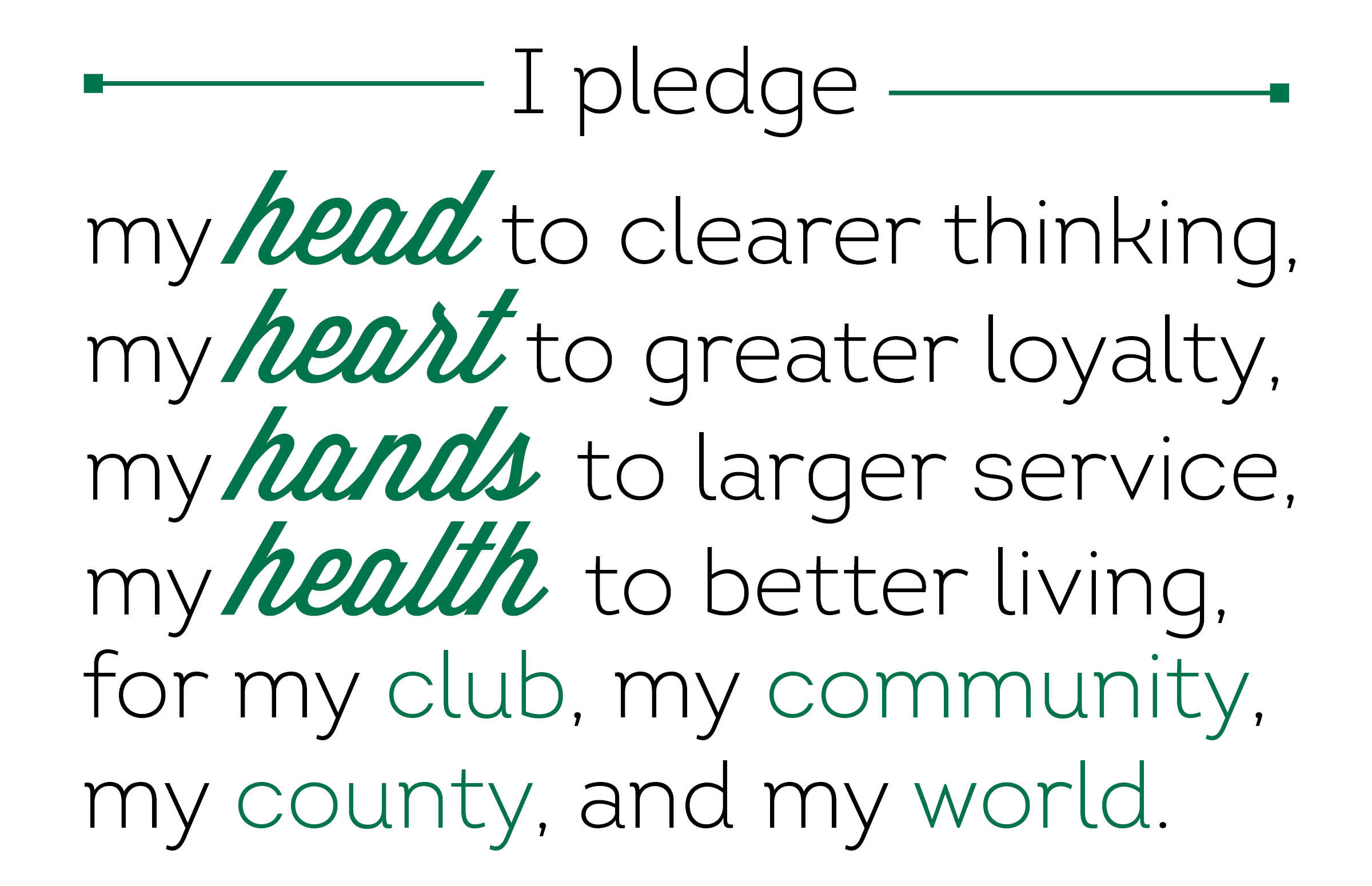 Otis Hall, State Leader of Kansas, was responsible for the original wording of the 4-H pledge, officially adopted by the State 4-H Leaders at the first National 4-H camp in 1927. The pledge remained unchanged until 1973, when it was revised to include "and my world."

Established in 1976, National 4-H Council is a not-for-profit organization which uses private and public resources to fulfill its mission of "building partnerships for community youth development that value and involve youth in solving issues critical to their lives, their families, and society."

Through the years, the overall objective of 4-H has remained the same: the development of youth as individuals and as responsible and productive citizens.

Today, 4‑H serves youth in rural, urban, and suburban communities in every state across the nation. 4‑H’ers are tackling the nation’s top issues, from global food security, climate change and sustainable energy to childhood obesity and food safety.

4‑H out-of-school programming, in-school enrichment programs, clubs and camps also offer a wide variety of STEM opportunities – from agricultural and animal sciences to rocketry, robotics, environmental protection and computer science – to improve the nation’s ability to compete in key scientific fields and take on the leading challenges of the 21st century. 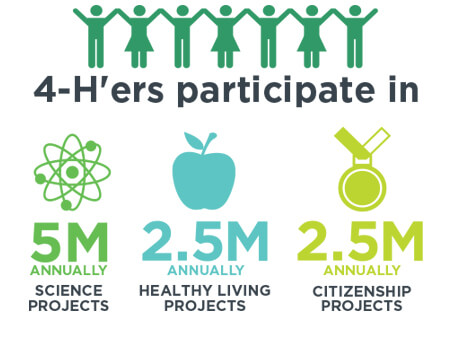