Currently, avian influenza (flu) is not a threat to human health or food safety in Georgia. Avian influenza poses risk to all poultry operations, from backyard flocks to the state's $22.8 billion commercial industry. The key to preventing the spread of the disease is biosecurity. All bird owners should take measures to prevent the exposure of flocks to avian flu. 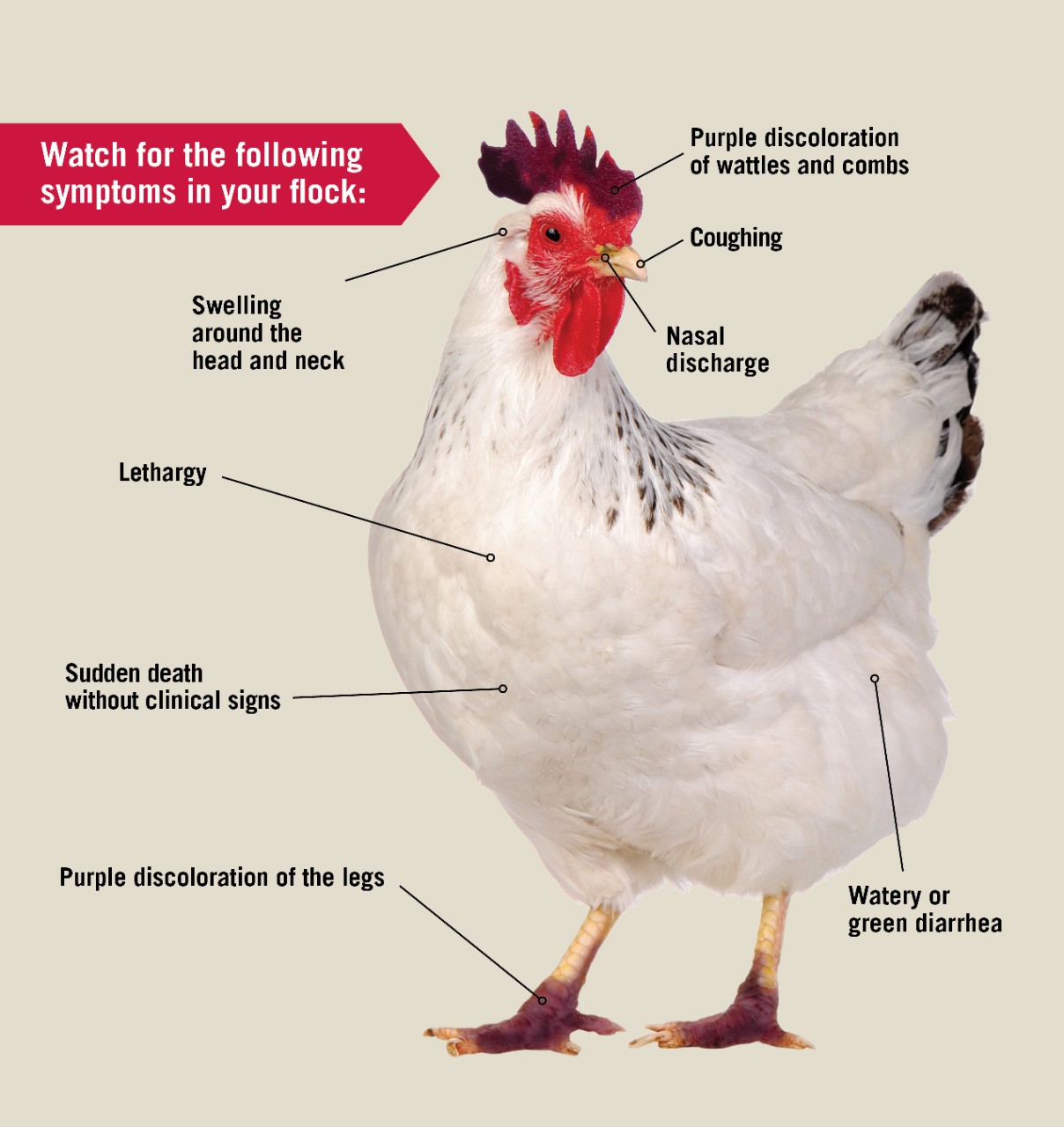 Watch for the following symptoms in your flock:

This guide was prepared by Casey W. Ritz and Brian D. Fairchild, professors in the Department of Poultry Science in the University of Georgia College of Agricultural and Environmental Sciences, and Dr. Louise Dufour-Zavala, executive director of the Georgia Poultry Laboratory Network.

What is avian influenza (AI)?

Avian influenza (AI) is a highly contagious viral disease of birds. It is carried by wild aquatic birds, especially waterfowl, that are not greatly affected by the virus. There are low pathogenic AI viruses (LPAI) that cause mild disease and others that are highly pathogenic (HPAI) that cause severe symptoms, including death. Under some circumstances, a LPAI virus can mutate to become HPAI. Avian influenza in any form is a serious threat to the poultry industry. It can make domesticated birds such as chickens and turkeys very sick and may ultimately lead to high mortality.

The virus is not highly pathogenic to migratory waterfowl, which means they end up acting as carriers for the virus and can allow it to travel vast distances. When wild birds fly south for the winter months, their migratory pathways take them over much of the United States; they can deposit the virus along the way, contaminating the environment and infecting commercial, backyard and recreational flocks.

What are the species of wild birds that can carry highly pathogenic avian influenza but not die from it?

Some wild aquatic birds such as gulls, terns, shorebirds, and waterfowl (ducks, geese, swans) are carriers of the avian influenza virus and generally will not exhibit clinical signs when infected.  These species are considered reservoirs for avian influenza viruses.  Most other birds can become infected, shed the virus, and display clinical symptoms or even death. Poultry and game birds can be easily become infected.

Can someone contract avian influenza from eating poultry meat or eggs?

What are the symptoms of avian influenza?

Symptoms of avian influenza include:

What measures can be taken to prevent a poultry flock from contracting avian influenza?

There is no acceptable or practical treatment once birds have contracted HPAI. Also, we cannot keep migratory birds from carrying the virus into our region and depositing it wherever they go. Prevention of infection is the best strategy.

To protect the health of poultry and other domestic birds in our state, we need:

What should someone do if their flock is experiencing high mortality or exhibiting symptoms of avian influenza?

Anyone with poultry that are exhibiting signs of AI should contact the Georgia Poultry Lab Network’s Avian Influenza Hotline online or call 770-766-6850. GPLN prefers to receive sick-bird calls only through the AI Hotline. This is particularly important with backyard flocks that have contact with waterfowl or are exhibiting high mortality, depression, and severe decrease in egg production. For commercial flocks, a decrease in water and feed consumption, high mortality, and a decrease in egg production are the most concerning signs of illness.

Do organic growers have any special considerations in responding to avian influenza?

Organic growers need the same information as others to protect their flocks, namely effective biosecurity. When communicating with organic producers, it is helpful to emphasize that housing birds indoors during the fall and winter months will minimize contact with migrating wild birds. When the threat is particularly menacing, the Georgia Department of Agriculture may send a strong recommendation for all birds to be brought inside for protection.

Can people still participate in poultry activities such as exhibitions, flea markets and poultry swaps when there is an avian influenza threat?

Poultry assemblages are permitted until the Georgia Department of Agriculture deems that it is too risky to hold these activities because of the high risk of infection and spread. Be on the lookout for press releases indicating periods of high risk. For any questions regarding what qualifies as an assemblage, please contact the Georgia Department of Agriculture at 800-282-5852.

Can people still buy or sell poultry and poultry products through their farm or the mail when there is a threat of avian influenza?

People must follow all state regulations related to pre-movement testing for all poultry movements at any time. The private sales of poultry and hatching eggs usually are not affected by press releases related to assemblages. However, confirmed cases might change the rules of poultry and poultry product movement in and out of surveillance zones.

What should people do if they find a dead wild bird?

If the cause of death is unknown, contact the Georgia Department of Natural Resources at 706-557-3333.

What happens if highly pathogenic influenza is found in a local poultry flock?

HPAI is considered a foreign animal disease within the United States.

If it was found in a local poultry flock, the Department of Agriculture would take steps to prevent spread to any other birds or flocks in the area. The infected operation would be depopulated as humanely as possible, the dead birds disposed of in a safe manner, and the premises cleaned and disinfected. Simultaneously, all birds within a 6-mile-radius surveillance zone from the infected premises would be tested for presence of the virus. While this response is underway, all bird movements in and out of the zone would fall under specific permitting rules.

Unfortunately, the presence of avian influenza causes suffering in affected birds and disrupts business and bird-related activities. It also disrupts the trade of poultry products in and out of the United States. The U.S. maintains an indemnity program that has helped minimize losses to poultry producers and small flock hobbyists.

In the event that there is a positive case of avian influenza, what is the best way to find at-risk backyard flocks in the area?

Census teams recruited during the response will go door-to-door in the zone established around the infected premises to locate at-risk flocks and provide information to flock owners on what to do if their birds start to show symptoms of AI.

Is there a way to receive notifications when positive cases of avian influenza are confirmed in other states?

Lists of confirmed cases in either domestic flocks or wild birds can be found on the USDA–APHIS website under avian influenza:

What is the best method for backyard flock owners to dispose of dead birds infected with avian influenza?

The response team will be responsible for determining the best method of disposal. If avian influenza is suspected, please contact the Avian Influenza Hotline at 770-766-6850 before anything is done with the dead birds. Reporting is critical to the success of the response and control of this virus.

What are the protocols for dealing with other animals that are within the control area surrounding premises infected with avian influenza?

Non-avian species of animals are not susceptible to HPAI; however, these animals or equipment associated with them may be able to physically carry and transfer the virus. For the first 24–48 hours after confirmation of HPAI, cease all movement of animals, as well as vehicles and equipment used for animal transport, within a 6-mile control area. This is to prevent spread of the virus while the response team focuses its efforts on the infected premises and identification of additional premises that may have been exposed to the HPAI virus. After that time, animals and equipment may be moved by permit.

If avian influenza is detected in a backyard flock, will it have a detrimental effect on Georgia exports?

Exports will stop until it is verified to the satisfaction of the nation receiving the exported product that the avian influenza virus has not spread to any commercial poultry.

In the event that avian influenza is identified, who is responsible for the response?

How is information about the response disseminated?

All information is channeled through the Public Information Officer (PIO) that is part of the response team to an official incident. Local media should get their information only from the PIO. This will help avoid any false information from circulating.