Circular 949
View PDF picture_as_pdf
This publication is part of the Home Garden series.

Muscadines are truly a fruit for the south. They were discovered here by the early colonists and have been a favorite fruit of southerners since. Although muscadines can be grown successfully in most parts of the state, they are best adapted to the Piedmont and Coastal Plain areas. The severe winters of the Mountain area hamper production.

Are you enjoying muscadines now? If not, you may want to try a vine or two. Muscadines are ideal for backyard gardens because you can successfully grow them with a minimum spray program.

Muscadines will require a minimum 20 feet of trellis per plant. Therefore, measure the area where you will plant the vines. That way, you will know how many plants to purchase. If you plan to have more than one row, space the rows 12 feet apart. Once you have determined how many plants to buy, lay out the area by putting stakes where the trellis posts will go. The posts should be 20 feet apart. Plant the muscadines 1 foot from the post since the crop load is usually heaviest in the center of the vine.

To plant, dig a hole large enough to accommodate a bushel basket. Adjust the soil pH to 6.0 to 6.5. If you do not know the pH, take a soil sample. If you do not want to take a soil sample, thoroughly mix ½ cup of agricultural limestone (dolomitic type) to the soil taken from the hole. Then, plant the vine the same depth it grew in the nursery and water it. Following watering, cut the plant off. Leave about six inches of the plant above the soil line. Caution: Do not put fertilizer in the planting hole. Do not apply fertilizer immediately after planting. 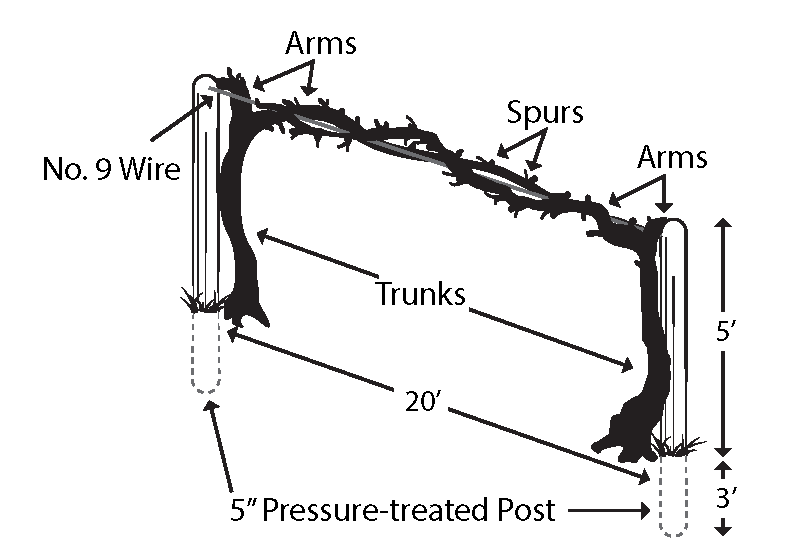 Figure 1. A one wire trellis with established vine.

One Wire Trellis - Use the single wire trellis system in south Georgia because of fruit disease problems. End posts should be 5- or 6-inch pressure-treated, 8-foot posts. Set them 3 feet deep and angle them slightly away from each other. Line post(s) should be 4 inches in diameter and 7 feet long. Set them 2 feet deep in a vertical position. Use no. 9 wire to support the vines. Wrap the trellis wire around one end post near the top. Staple it securely several times. Then run it across the top of the end post and staple it loosely. Next, run the wire over the tops of the line posts. Staple the wire loosely to the tops of these posts. Staple the wire loosely to the top of the other end post. Then, pull the wire tight. Wrap it around the end post and staple it tightly several times. The wire should be 5 feet above and parallel to the ground. 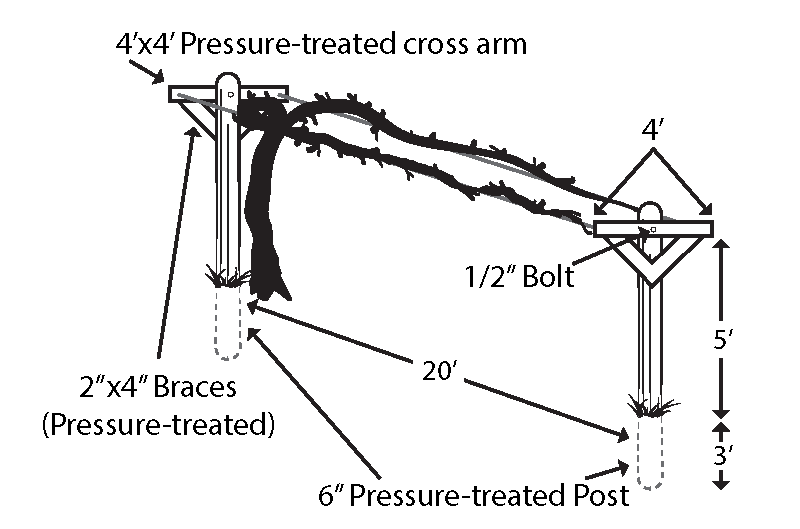 Double Curtain Trellis - The double curtain trellis provides two wires 4 feet apart and 5 feet above ground. This permits each vine to produce 40 feet of fruiting arm rather than the conventional 20 feet with the one wire system.

Diligent care during the two growing seasons following planting is essential if the vines are to develop into productive additions to the home garden. Vines generally die the year of planting if particular attention isn’t given them. Watering as needed, fertilizing as recommended, keeping the area around the young plants weed free, and proper training must be done if success is to be realized.

A properly trained vine has a trunk, two (or four) arms and fruiting spurs. The first two years of training are devoted to developing the permanent trunk and fruiting arms.

In the spring following planting, each plant will produce three or four shoots. When these shoots are about 1 foot long, select the strongest and remove all the others. Tie a string to a small stake. Drive the stake in the ground. Place it about 3 inches from the plant.

For the One Wire Trellis, do the following: Tie the free end of the string to the trellis wire. Train the shoot to the string. Pinch off side shoots as they develop. When the shoot reaches the top wire, pinch it off just below the wire. Let the top two buds form the two arms along the trellis wire.

For the Double Curtain Trellis, do the following: Immediately above the young vine, tie a piece of string between the two wires. Then tie the free end of the string attached to the stake to the middle of the string connecting the two wires. The two strings should form a “Y.” Train the shoot to the string. When the shoot reaches the string connected to the two wires, pinch out the tip. Let the top two buds develop. Train these shoots to the strings leading to the trellis wire. Once they reach the wire, pinch out the tips and let the top two buds form the two arms along the trellis wire.

For either trellis system, shoots other than the arms growing from the trunk should be kept pinched back. Once the trunk and arms have developed, the vine is ready to begin fruiting. Shoots (also called canes) will grow each year from the young arms. 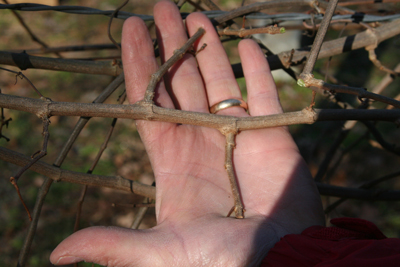 Since muscadine fruit are borne on new shoots arising from last year’s growth, you should prune back the canes that grew the previous year, leaving about 3 inches of growth to form spurs. Prune in February or early March. Don’t be alarmed if the vines “bleed” at pruning cuts. Bleeding does not harm the vines.

When you leave too many buds on the vine, the plant over produces and fruit are poor. After three or four years of production, you will need to remove every other spur cluster to prevent overcrowding. Try to leave spurs that are on the top of the arms (Figure 3). It is a good idea to remove old fruit stems since they are a source of disease.

Remove tendrils that wrap around the arms or spurs. (Tendrils are finger-like plant parts muscadines use to attach themselves to their supporting structure.) If tendrils are not removed, they will girdle the arms or spurs and cause reduced production. Remove old fruit stems if fruit rots are a problem since the disease may overwinter in the old stems.

Timing and method are the same as the first year. Double the rate for each application. Increase the diameter of the broadcast circle to 4 feet.

If the vine has grown well the first two years and you expect a crop, apply 2 pounds of 10-10-10 or equivalent per vine in March. Apply 1 pound of 10-10-10 per vine in May. Broadcast in a 6-foot circle. If plants have not done well, fertilize as instructed for the second year.

Established vines - Apply 3 to 5 pounds of 10-10-10 or equivalent per plant in March of each year. Then apply ½ pound of ammonium nitrate around June 1.

Check the soil pH about every three years. Your county extension agent has kits for sampling. If liming is necessary, use the dolomitic lime.

Grapes have a relatively high requirement for magnesium. Each year, hundreds of Georgians have grape vines that suffer from a shortage of magnesium. This shows up as yellowing between the veins of older leaves. This yellowing progresses up the shoots as the leaves grow older. Premature fruit fall may also result.

To prevent or correct magnesium deficiency, apply Epsom salts at the rate of 2 to 4 ounces for one- and two-year-old vines; 4 to 6 ounces for older vines. Be sure to evenly broadcast Epsom salts over a 3- to 6-foot area.

Occasionally, disease and/or insect infestation may be severe enough to warrant spraying. If you find it necessary to spray, contact your county extension agent for recommendations.