Circular 945
View PDF picture_as_pdf
This publication is part of the Home Garden series.

Most people are fond of figs and rightfully so. They are very tasty and can be eaten fresh, preserved, or used for baking and making desserts like ice cream. Figs will do well in most parts of Georgia except the mountainous areas (see map.)

Figs will grow in many types of soils, but they need a site free of root-knot nematodes. Contact your county agent for information about testing your soil for nematodes. In the colder areas of the state, the ideal site is the south side of a building. Cold injury will be further reduced if the fig does not receive direct sunlight early in the morning or late in the evening during the winter months. However, the site should receive a minimum of eight hours of sunlight daily during the growing season.

Purchasing Plants or Propagating Your Own

Fig trees from nurseries may be grown in the field and sold bare-rooted or grown in containers and sold in the container.

Because considerable confusion exists about fig variety names, order fig plants only from reputable nurseries in the Southeast. Never purchase or attempt to grow the kinds of figs grown in California. They require pollination by a tiny wasp that cannot survive under Georgia?s climatic conditions. The only types recommended in Georgia are the common ones that produce only female flowers and set fruit without cross-pollination. 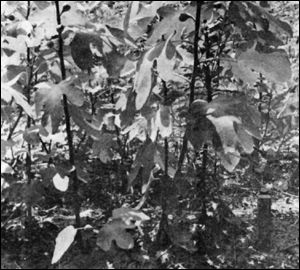 Fig trees are easy to propagate, and a home planting can be started at very little expense. The simplest and easiest method of propagating figs is by stem cuttings from an older bush. Make cuttings in late February. The cutting should be 8 to 10 inches long from 1-year-old wood. The upper end should be cut just above a node. Tips and soft growth do not root satisfactorily. Set the cuttings directly in the nursery row in well-drained and well-prepared soil. The cutting length governs the planting depth. Cuttings should be planted so only one bud is exposed and spaced 10 inches apart in the row (see Figure 1). In case of dry weather, watering will aid the growth of the cuttings. These cuttings root early, grow rapidly and make good trees for permanent planting in the fall.

Figs may also be propagated by rooted side shoots. Shoots below the ground?s surface frequently root; they may be separated from the parent bush and transplanted.

Figs can also be propagated during the growing season by rooting leafy cuttings under mist, or by air layerage. The use of these procedures, however, is seldom warranted.

To make an air layer, a ring of bark ¾ inch wide should be removed from a large twig or small branch. Moist sphagnum moss should be placed over the wounded area and covered with polyethylene film, and the film should be tied at both ends.

Fruiting or a Lack of Fruiting

If you look for blossoms on your fig tree, you probably won?t find them — they are inside the fruit.

A number of conditions may cause the fruit not to ripen or to drop prematurely. The following are the most common in Georgia in order of importance:

Soil preparation should always include a preplant soil test. If your soil pH is low, adjust the pH to 5.5 to 6.5 with dolomitic limestone. Spread the limestone evenly over the entire area where the figs will be planted, then till the soil. If possible, till at least a 6-foot by 6-foot area where each bush will be planted at least 8 inches deep.

Before planting a bare-root tree, prune about one-third of its top, unless it was topped by the nursery. Container-grown plants can be transplanted without being pruned; just remove them from the container, spread their roots, and set them in the planting hole.

Set trees in the planting hole 4 inches deeper than they were in the nursery to encourage low branching for bush form. Fill the hole with soil; water heavily enough to settle the soil around the roots. Do not apply fertilizer in the hole at planting.

There are many varieties of figs available, but only a few are well adapted to Georgia. If you want to try to grow figs in the mountains, select a protected site and try Celeste or Hardy Chicago. In addition, some varieties such as Brown Turkey will produce some figs on the current season?s growth after being killed to the ground by a freeze. In the Piedmont, Celeste, Hardy Chicago, and Conadria are fairly well adapted. South of the Fall Line, any of the varieties listed can be grown, but Celeste and Conadria are two of the best. If you would like to extend the season with a late ripening variety, plant Alma.

Although fig plants can be trained to either tree or bush form, the tree form is not practical for the Piedmont area of Georgia. In this region, fig plants are frequently frozen back to the ground, making the tree form difficult to maintain.

Bush form is generally recommended for other areas of the state as well. In the bush form, more of the fruit will be closer to ground level and easier to pick.

Begin training to bush form at the time of planting by cutting off one-third of the young plant. This forces shoots to grow from the base of the plant. Let these shoots grow through the first season. Then, late during the winter after the first growing season, select three to eight vigorous, widely spaced shoots to serve as leaders. Remove all other shoots.

Be sure the leaders you select are far enough apart to grow to 3 to 4 inches in diameter without crowding each other. If they are too close together, the leaders cannot grow thick enough to support themselves and their crop, and they tend to fall over or split off under stress of high winds. If this happens, remove the damaged leader and select a new one late the next winter by choosing one of the many suckers that arise annually.

If more branching is desired, head back the bush each spring beginning the second year after planting, after danger of frost is past but before growth has started. Do this by removing about one-third to one-half the length of the last year?s growth.

Also, prune all dead wood and remove branches that interfere with the leaders? growth. Cut off low-growing lateral branches and all sucker growth that is not needed to replace broken leaders.

Do not leave bare, unproductive stubs when you prune. These stubs are entry points for wood decay organisms. Make all pruning cuts back to a bud or branch.

Fertilizing: Fig trees grow satisfactorily in moderately fertile soils with limited fertilizer. But fertilizer is needed in soils of low fertility or where competition from other plants is heavy.

Although nitrogen is usually the only needed plant nutrient, other nutrients may be lacking in some areas. If your soil is not very fertile, follow these general guidelines:

Watering: For highest yields, figs need watering throughout the summer. The frequency and the amount of water depends to a large extent on the soil. As a rule of thumb, 1 to 1½ inches of water per week from rain or irrigation is adequate. Yellowing and dropping of leaves may indicate drought.

In lawns, the grass beneath fig plants may wilt in the heat while the rest of the lawn does not. This indicates the figs need water. Figs grown with lawn grasses may require one or more waterings a week during hot, dry periods.

Winter injury in figs is directly related to the amount of vigor. A vigorous, fast-growing plant is easily killed by low winter temperatures in the Piedmont. If figs are frequently winter injured in your area, halve the fertilization recommendations.

If you are attempting to grow figs near the mountains, limited fertilizer should be applied to make the plants as cold hardy as possible. 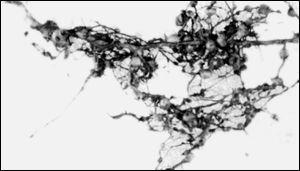 Root-knot nematodes are the leading killer of fig trees in South Georgia. Root-knot shares this honor with cold damage in North Georgia. An on-the-spot diagnosis of root-knot infection is possible. Dig up a few roots and look for the characteristic galling caused by the nematode (Figure 2). There is NO other similar problem in figs.

Root-knot nematode infected fig trees CANNOT be cured with chemical treatment. Pruning the tops to balance with the weakened root system and attentive watering and fertilization may prolong the life of root-knot infected fig trees. Usually, however, they will die sooner or later regardless of the care they receive.

In planting a new fig tree, select a site as far as possible from any old garden sites. Take a nematode sample in this site. If root-knot nematodes are present, do not plant figs.

Fig rust is usually not fatal, but repeated epidemics will weaken the plant. In any given year, heavy leaf drop from rust will reduce size and quality of the fruit.

Gather all infected leaves from the ground under the bushes in the fall and remove them from the area.

Fig fruit souring is caused by yeasts spread by insects. Souring becomes noticeable as the figs begin to ripen. A souring fig will often show gas bubbles, scummy masses oozing from the eye, or both. These figs will give off an offensive fermented odor. Souring cannot be controlled with chemical sprays. The only control is to grow fig varieties that have a tight or closed eye that prevents insects form entering the fig fruit.

Pink blight appears as a dirty white to pale pink velvety growth on dying and dead twigs. It usually occurs in the interior of the tree. Remove infected branches and prune the tree to allow good air movement within the tree.

Leaf blight is another fungus disease that attacks leaves and fruit. Infection may start as a semicircular brown spot at the base of the leaf. Some leaves shrivel and die; others may be covered with brown spots that break out to leave irregular holes. During hot, wet weather, leaves can die and drop very quickly. Dead leaves are often matted together and held to the tree by threadlike strands similar to spider webs.