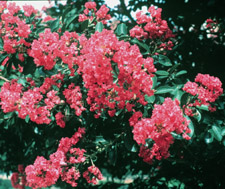 Crape myrtle (Lagerstroemia indica) is one of the most useful flowering shrubs/trees grown in Georgia. It provides abundant summer color with a minimum of maintenance. Because of these features, crape myrtle should be used more often in the home landscape and as street trees in community developments. Crape myrtle is ideally suited for community plantings since it is long-lived, withstands droughts after becoming established, and is relatively free of disease and insect difficulties. Colors range from red and pink to lavender and white. It is usually best to use only one color in each cluster. Crape myrtle can be used effectively with other summer flowering shrubs, such as althea, if you exercise care in harmonizing colors.

During recent years considerable breeding work has resulted in a number of new crape myrtle cultivars (See Table 1). Plant height ranges from less than 3 feet to more than 20 feet, making it one of the most versatile plants. Some cultivars can be used as small foundation shrubs while others as specimen trees. Many of the newer cultivars also have improved flower color, better fall leaf color, handsome bark and better cold and disease resistance than the old seedling types.

Crape myrtle will grow under adverse soil conditions. It grows and flowers much better in well-prepared soil, however, so good soil preparation is well worth the effort involved. Preparation includes digging a large hole — at least two times wider than the root ball. Set the plant in the hole no deeper than it originally grew in the container or field. Then backfill with the same soil removed from the hole after breaking apart clods and removing rocks or other debris. Research has shown that organic matter amendments are not necessary when planting in individual holes. Amendments in the hole encourage roots to stay within the hole and not grow outward into the surrounding native soil. Amendments are most beneficial, therefore, when they are incorporated uniformly throughout the soil surrounding the planting hole.

After planting, water thoroughly to settle the soil around the roots, and mulch to conserve moisture, reduce weeds and insulate the roots against extreme cold and heat. Three to five inches of pine straw, pine bark, shredded hardwood mulch or shredded leaves placed over the planting hole is ideal. Mulching a larger area beyond the planting hole is even better.

Water crape myrtle plants thoroughly at planting time and once a week, in the absence of rainfall, for the first two months after planting.

Established crape myrtle plants will tolerate drought. Flowering is enhanced, however, if plants are watered during dry periods that occur during the flowering season.

Crape myrtle flowers on new growth of the season, so if you choose to prune, do so in the dormant season, i.e. later winter to early spring before growth resumes. Avoid pruning in early fall before the first frost, because pruning forces new growth and keeps the plant from going dormant. Severe freezes can kill the plant if it is not fully dormant.

It is a common misconception that crape myrtles require pruning in order to flower. This is not only false but has also resulted in virtually millions of plants being pruned very aggressively, a practice commonly referred to as "crape murder." The most natural and beautiful crape myrtle trees result from limited or no pruning (see Figures 2 and 3). In addition, aggressive pruning leads to increased suckering (shoots arising from below-ground roots, Fig. 3) which is not only undesirable but it could result in powdery mildew spreading from the suckers to the canopy of the tree (Fig. 4). Aphids are also attracted to the succulent growth which results from aggressive pruning. It is far better to plant dwarf, or semi-dwarf varieties which grow to desired mature heights than to continue fighting with a more vigorous, larger cultivars planted in a too-small space. If you choose to prune however, follow the simple steps: First, remove suckers from the base of the plant. Second, as the tree grows, remove lower branches form the bottom third of the tree to expose the trunk character. Last, remove crowded or crossing branches from the canopy. The seedheads are an attractive feature and should be left on the tree. As the new growth pushed in the spring, the seedheads fall off. Some folks find that objectionable; if desired the seedheads can be removed by heading back to above where a leaf joins the stem, or if no leaves are present, just above a lateral bud. On some cultivars, pruning to remove spent flower blossoms after they fade will stimulate new growth and another blossom flush in late summer. A second bloom is sometimes difficult to force on cultivars that bloom after mid-July. Crape myrtles in tree form make wonderful accent plants or specimen trees. Many cultivars develop attractive trunks with exfoliating bark that add interest to the winter garden (see Table 1, page 6). To develop a tree shape, select three to five radially-spaced branches slightly leaning to the outside, these will become the main trunks. spaced shoots growing from ground level as the main trunks. Then remove side branches from these shoots about halfway up their height (Fig. 6). As the plant grows taller, more lower branches can be removed each year so the canopy begins 3 to 4 feet above ground level. You may also need to remove suckers (new young succulent spouts that grow from the base) periodically in order to maintain the desired tree shape. Some landscapers apply a synthetic plant growth regulator, called NAA (naphthalene acetic acid), to suckers after pruning to prevent them from re-sprouting. Figure 2. Crape Myrtle with natural growth.

A complete general-purpose garden fertilizer — such as 8-8-8, 10-10-10, 12-4-8 or 16-4-8 — is ideal for crape myrtle. To newly planted small plants (1-gallon size), apply 1 teaspoon of fertilizer monthly from March to August along the perimeter of the planting hole. Larger, established plants will benefit from one broadcast application of fertilizer in spring. Apply 8-8-8 or 10-10-10 at a rate of 1 lb. per 100 sq. ft. or 12-4-8 or 16-4-8 at a rate of ½ lb. per 100 sq. ft. Avoid over-fertilization because it causes excess growth and reduced flowering. The best time to fertilize is just before a rain. Otherwise, water in the fertilizer after application with irrigation. It is not necessary to remove mulch when fertilizing.

Propagation of patented varieties is not lawful. As the patent expires after 20 years of the original filing with the United States Patent and Trademark Office, older cultivars which have been on the market since the early 1990s can be propagated. Crape myrtle is easily propagated from semi-hardwood cuttings taken during the growing season. June, July and August are excellent times to root cuttings. Take cuttings from new growth of the season, leaving three to four nodes per cutting and several leaves. Rooting hormone is generally not necessary, and cuttings should root in three to four weeks. Place cuttings in a well-drained rooting medium in a shaded area and keep them moist by enclosing them in a clear plastic bag.

Cuttings also can be placed in prepared outdoor rooting beds. Thoroughly cultivate the soil to a depth of 10 to 12 inches. Add 4 to 5 inches of organic matter such as peat moss, leaf mold or pine bark to the surface and thoroughly mix it into the soil.

Place the cuttings approximately 6 inches apart. Insert them one-half their length into the soil. Mulch with 2 to 3 inches of pine straw, leaf mold or pine bark to conserve moisture. Keep them moist with regular misting.

The young rooted plants can be transplanted to their permanent location during the fall and winter.

Several diseases occur on crape myrtle including powdery mildew, Cercospora leaf spot, root rot and sooty mold. Powdery mildew is the most widespread and serious disease in Georgia. Powdery mildew typically develops in late spring and fall and is associated with warm day and cool night temperatures and high humidity. Leaves, young shoots and flowers are heavily coated with a powdery, white mold that can distort new growth. Infected flower buds may not open, and severely infected leaves and buds often drop early.

The other most damaging disease is a leaf spot caused by the fungus Cercospora lythracearum. Spots develop in mid-summer through fall during wet, humid weather. Large, dark brown spots develop on lower leaves and progress upward through the plant. Infected leaves turn yellow around the spots and drop prematurely. Sometimes even one spot will cause a leaf to drop on susceptible cultivars and can cause significant defoliation prior to frost.

Powdery mildew and Cercospora leaf spot can be controlled by applying fungicides when the diseases are first noticed. Consult the Georgia Pest Control Handbook for current fungicide recommendations. The best approach to prevent diseases is to plant disease resistant crape myrtle cultivars. A number of new crape myrtle cultivars from the U.S. National Arboretum and other nurserymen are resistant to powdery mildew and Cercospora leaf spot. (See Table 1) They are ideal for gardeners wanting low-maintenance landscapes.

Sooty mold is an unsightly superficial, dark brown or black coating on leaves and stems that can be removed by rubbing. It is the result of a fungus growing on honeydew excretions made by insects such as aphids, which are the most serious insect pest on crape myrtle. Sooty mold usually causes little direct damage, but it can cut vigor by reducing photosynthesis in the leaves. Using crape myrtle aphid-resistant cultivars and insecticide sprays can reduce sooty mold.

Root rots can be prevented by growing plants in well-drained soil.