Diseases of Leyland Cypress in the Landscape 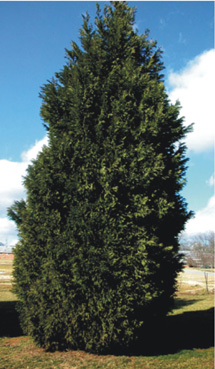 Leyland cypress has become one of the most widely used plants in commercial and residential landscapes across Georgia as a formal hedge, screen, buffer strip, or wind barrier. Leyland cypress (x Cupressocyparis leylandii) is a graceful, rapidly growing evergreen tree that is adapted for growth within the 6-10a USDA hardiness zones. The tree is best suited for fertile, well-drained soils. However, when young, the tree will grow up to 3-4 feet per year, even in poor soils. The tree will ultimately attain a majestic height of up to 40 feet. Leyland cypress forms a dense, oval or pyramidal outline when left unpruned, but the refined, slightly pendulous branches will tolerate severe trimming to create a formal hedge, screen or windbreak. The fine, feathery foliage is composed of soft, pointed leaves on flattened branchlets, dark blue-green when mature but soft and bright green when young.

Leyland cypress is considered relatively pest-free. However, because of its relatively shallow root system, and because they are often planted too close together and in poorly drained soils, Leyland cypress is prone to root rot and several damaging canker diseases, especially during periods of prolonged drought. Disease management is, therefore, a consideration for Leyland cypress.

One of the most noticeable symptoms of Seiridium canker is yellowing or browning of the foliage on one or more top or lateral branches. The discoloration is most likely to appear in early spring; however, it can be seen at any time of the year. The disease expansion often continues until a significant portion of the tree is destroyed. Upon closer examination, formation of numerous thin, elongated cankers is observed on stems, branches and branch axils. These cankers cause twig and branch dieback. Most of the cankers are slightly sunken, with raised margins, and they may be discolored dark brown to purple. Cracked bark in infected areas is often accompanied by extensive resin exudates that flow down the diseased branches. The cambial tissue beneath oozing sites is discolored with a reddish to brown color. 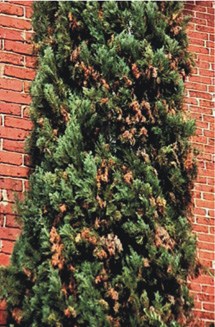 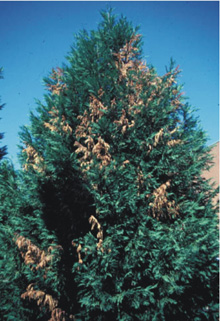 Disease cycle and Epidemiology of the Disease 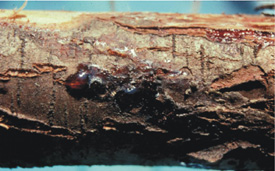 In the landscape, the causal agent, Seiridium unicorne, over-seasons in cankers on diseased trees. Environmental stress, predominantly drought stress, favors infection and canker development. Seiridium cankers enlarge up to three times faster on drought stressed trees than on adequately irrigated trees. Spring freeze and ice injury often predisposes trees to infection. Fruiting bodies of the pathogen, called acervuli, appear on the canker as small black dots that are barely visible to the naked eye. Fungal spores are spread to other parts of an infected tree or to other trees by splashing water either from rain or irrigation. The fungus also can be spread on pruning tools. Long distance spread occurs through the transport of infected cuttings or plants, or possibly by insects. New infections occur when spores lodge in bark cracks and wounds. Infection through lenticels may occur following hot, dry weather.

Proper establishment and care are the best defenses against Seiridium canker in residential and commercial landscapes. Due to its relatively shallow root system, plant Leyland cypress in tilled and amended soils to encourage plant vigor. Avoiding excessive watering and heat stress is vital to establishment of a healthy Leyland cypress.

To minimize water loss and water competition with other plant species such as turf, mulch an area several feet beyond the lowest limbs. During hot, dry summer days, irrigate trees thoroughly around the base of the tree every 7-14 days, depending on soil composition. Take special care for trees located near drive-ways, paved areas or heat-reflecting buildings. Providing adequate irrigation during periods of drought is the best defense against Seiridium canker disease.

Sanitation, such as removal of cankered twigs and branches, helps prevent disease spread. Destroy pruned materials, and disinfect pruning tools by rinsing in rubbing alcohol or a solution of 1 part bleach to 9 parts water. Remove extensively damaged trees or trees that are damaged in the main trunk.

No cultivars or selections are known to be resistant to the disease. In the landscape, fungicides are seldom used and they provide no control once an infection has taken place.

Another damaging disease on Leyland cypress in Georgia landscapes is a canker and dieback named Botryosphaeria (Bot) canker, caused by the fungus Botryosphaeria dothidea. This aggressive disease affects a number of woody shrubs and trees worldwide, and it has been reported on azaleas, rhododendrons, flowering dogwoods and redbuds, among others. Plants suffering from environmental stresses (freezing, drought, or heat) or wounds are particularly susceptible to B. dothidea infection in landscape plantings. 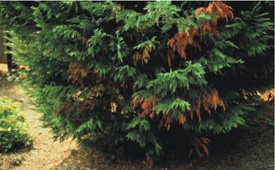 In the landscape, Bot canker symptoms resemble those caused by Seiridium canker. Bright, rust-colored branches and yellowing or browning of shoots or branches are the first observed symptoms. Closer inspection reveals the presence of sunken, girdling cankers at the base of the dead shoot or branch. Sometimes, the main trunk shows cankers that might extend for a foot or more in length. These cankers rarely girdle the trunk, but they will kill branches that may be encompassed by the canker as it grows.

Canker surfaces may be cracked and have a darker color than the surrounding healthy bark. The discoloration often extends several inches below the canker periphery. Little or no resin "oozing" is produced on the infected areas.

Disease Cycle and Epidemiology of the Disease

The Bot canker fungus survives in the bark and in other dead tissues of Leyland cypress, but it might also survive on host shrubs and trees. Fruiting bodies of the fungus are embedded beneath the bark, but their presence can be discerned as small, raised pimples scattered over the surface of the canker.

As in Seiridium canker, the spores of the fungus are spread by splashing water from rain or irrigation and by infested pruning tools. Long distance spread is through the transport of infected cuttings or plants, or possibly by insects. Spores of B. dothidea may also be spread by wind.

Due to the composition of many of Georgia's soils, establish new plantings of Leyland cypress in tilled and well-drained areas. Till areas 3-4 times the diameter of the root ball, and amend soils as needed. Perform a soil fertility test, and adjust soils with lime and fertilizer as recommended. Set the tree at or just above the soil level. Avoid environmental and cultural stresses that predispose the plants to infection, as suggested for Seiridium canker.

In the landscape, Phytophthora root rot primarily affects root systems of smaller plants; large, established trees are rarely affected by the disease. The pathogen is more damaging in situations where soil drainage is poor. Plants with severe root damage exhibit stunted growth, general yellowing of the foliage, smaller branches and needles, and tip dieback. In severe cases, plants will die. 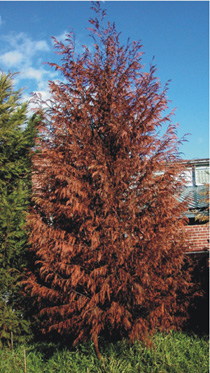 Decayed, darkened roots are a symptom of the disease; however, Phytophthora root rot can only be diagnosed with certainty by laboratory analysis of affected roots. To avoid Phytophthora root rot, establish Leyland cypress in tilled and well-drained soils. Avoid over-irrigating trees, especially during establishment, and follow all cultural practices as described for the control of the canker diseases. Chemical control is not recommended for landscape trees.

Annosum root rot is uncommon on Leyland cypress in Georgia landscapes. Trees at new construction sites, especially those located on urban-wild land interfaces and where pine clearing has taken place, are more susceptible to the development of this disease.

Disease develops through fungal spore infection of freshly cut pine stumps. The fungus then grows through the stump and its root system, infecting adjacent Leyland cypress trees through root contact.

Symptoms of Annosum root rot include the decay and death of larger roots on newly infected plants. Foliage symptoms include yellowing and slow decline, followed by death of the tree. in some cases, however, the foliage on the entire tree suddenly turns reddish-brown. Some trees may fall over before any crown symptoms are present. Basidiocarps (large mushroom-like structures) are obvious at the base of an infected tree, usually beneath the mulch or leaf litter. These structures are usually small, irregular in shape, brown on the upper surface and white on the lower surface.

There is no effective control once the tree is infected. As a preventive measure, remove the stumps of felled conifers completely or treat the stump surface with borax immediately after the tree is felled.