Cane blight can be a major disease of blackberry in the Southeast, resulting in severe losses — and sometimes causing the complete destruction of fruiting canes in any given year. It is generally not reported in other states as a major disease of blackberries, except when winter injury occurs on thornless blackberries, and most of the reports are associated with raspberry. Wet, humid conditions observed in Georgia and other southeastern states, however, allow for significant losses following pruning or other injuries to the primocane. 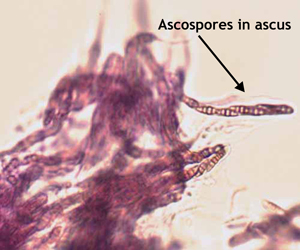 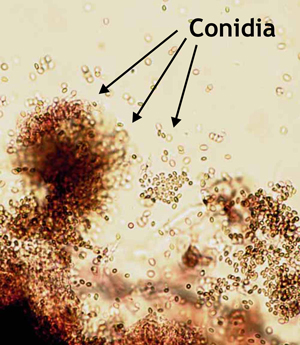 Figure 1. Ascospores (top image) and conidia (bottom) at 400X magnification. Two spore types are produced by the cane blight fungus. Ascospores form in an ascus (pl. asci), a tubular membrane that contains eight ascospores when mature; many asci are found in each pseudothecium. Conida are found in a pycnidium and are very small. When viewed through a hand lens, both spore-containing structures can be observed; these are found emerging from just under the surface of dead blackberry canes, and they appear as small, raised, pepper-like black specks. When crushed, the spores are seen as above.

Cane blight is caused by Leptosphaeria coniothyrium, a common fungus that also causes stem canker on roses and other ornamentals. The fungus produces two types of fruiting structures — pseudothecia and pycnidia — both of which are largely buried in the dead bark tissue. Likewise, the fungus produces two spore types — ascospores or conidia. County extension offices can diagnose this disease either directly through in-office examination or through shipment to extension diagnostic clinics. Incubation of dead stems in a moist chamber (sealed plastic bag with a moist paper towel or similar system) allows accurate diagnosis; within three to four days, sporulation of both fungal spore types can be observed, and microscopic observation of the spores can be used to confirm the diagnosis (Figure 1). Ascospores are seldom observed in North Carolina. (Turner Sutton; personal communication)

The fungus overwinters on dead tissue of old floricanes (fruiting canes). If not removed, dead canes or cane tissue can serve as a ready source of inoculum. Spores are produced from the spring through the fall, and spores infect injured primocane tissue. Therefore, the risk of cane blight is greatly increased when primocanes are injured or improperly pruned. Though pruning cuts provide a major infection site, insect damage, herbicide damage, freeze injury, or injury from farm machinery or other mechanical operations will likewise provide sites for infection to occur. If rainfall immediately follows any injury, this furthers the likelihood of pathogen infection and establishment in the vascular tissue. Once primocane infection has occurred, the pathogen continues to invade plant tissue during the fall and winter, causing floricane bud failure and cane dieback in the following spring, completing the disease cycle (Figure 2).

Figure 2. Disease cycle of cane blight. The cane blight fungus survives on dead canes or infected tissue. Infection of damaged primocanes occurs in the spring, summer or early fall following injuries such as those caused by pruning cuts. Following infection, symptoms of dieback may be observed, but symptoms often do not develop on the floricanes until the following spring. (Courtesy M.A. Ellis; drawing by Cindy Gray. Reprinted with permission from the Compendium of Raspberry and Blackberry Diseases and Insects. 1991. The American Phytopathological Society, St. Paul, Minn.

In the summer, fall and winter following the initial wound-site infection, cane blight lesions may develop on the primocanes; these lesions are generally dark red to purple with irregular purple borders, similar in appearance to those of Botryosphaeria cane canker. In some cases, lesions may extend for only a few inches, but canes can also be girdled by larger lesions or cankers, causing their death and complete loss of production the following year. Floricane lesions become brittle in the spring and summer, and released spore masses dry on the canes, often resulting in a silvery to gray surface appearance on dead tissue (Figure 3). With a hand lens, fruiting structures will appear as small, black, pimple-like bumps largely buried in the blackberry tissue (Figure 4).

Figure 3. Symptoms of cane blight. Following infection, dead and dying floricanes are seen in the spring and summer. Dead canes appear silvery to gray. Damage is generally associated with pruning cuts, especially large ones.
Figure 4. Signs of cane blight. With a hand lens, small, black, pepper-like specks can be seen on the surface of the dead tissue. These are the fruiting structures for the fungus (pseudothecia and/or pycnidia).

Figure 6a. Improper pruning technique and resulting disease establishment. Waiting until primocanes have substantially exceeded the desired height will only cause trouble. Pruning cuts will be much larger.
Figure 6b. Improper pruning technique and resulting disease establishment. This allows easy infection by the cane blight fungus as well as other disease-causing organisms such as Botryosphaeria species, and ultimately death of canes will result form these open cuts. 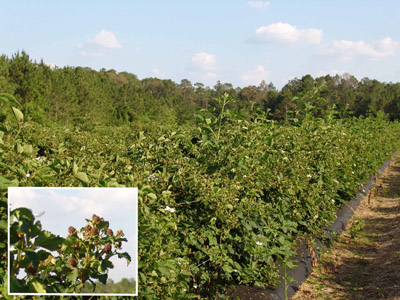 Figure 7. Properly managed blackberries. The above plants were "pinch" or "tip" pruned in the previous summer, with fungicides applied at the end of each day of pruning. Cane blight was not observed (inset), though the disease was prevalent in surrounding locations with less stringent management techniques.

Apply fungicides after pruning each day to provide a protective barrier on the wound site until healing can occur. With proper pruning and use of fungicides, blackberries can be produced without cane blight, even in wet years (Figure 7). Contact your local county agent for specific chemical recommendations.