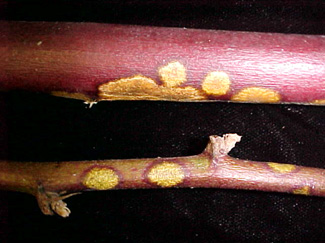 With the recent expansion of the blackberry industry in Georgia, diseases mentioned only briefly as curiosities in other locations have often become problematic. One of these is the orange felt (also known as orange cane blotch) disease of blackberry, caused by the parasitic alga Cephaleuros virescens. Orange felt is especially prevalent on blackberries grown in very hot, wet and humid environments, such as those encountered in much of the Coastal Plain areas of the Southeast. Where colony formation (i.e., the degree of coverage of the cane) is limited, it has been stated that this alga does not limit blackberry production. Although research trials have not been conducted to determine the effects of this algal species in Georgia, we are currently recommending that producers use control methods. Where ideal environmental conditions occur, this alga may girdle canes or exacerbate other cane diseases, causing subsequent decline and death.

Only a few algal species attack plants, and of these, C. virescens is one of only two common species found in the United States. The C. virescens alga is prevalent in the south, and it has been reported as a pathogen of nearly 300 species and cultivars of plants. Of these, roughly 80 include stem spots or lesions as symptoms.

Though C. virescens is generally reported to colonize only between the cuticle (upper waxy layer) and the epidermis (outer cell layer), colonization has been observed between the epidermal cells of the plant. Damaged tissue has been observed within the plant cortex region as well — opening the door for the possibility that the plant may be “girdled” by the infections or that they may cause subsequent damage. Since stem cracking also accompanies infection, this may also account for death of blackberry canes due to secondary attack by opportunistic fungi such as Botryosphaeria species. County extension offices can diagnose this disease, either directly through in-office examination or through shipment to extension diagnostic clinics; symptoms and microscopic observation of the algal filaments and/or sporangiophores can be used to confirm the diagnosis (Figures 1-5). 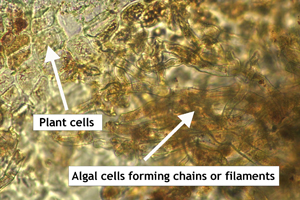 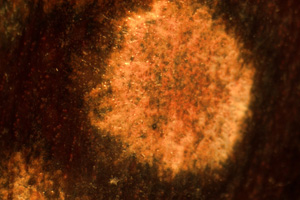 Figure 2. Appearance of spots when sporangio-phores are not actively produced. At this stage, spots appear as orange relatively smooth areas on the canes. These spots can be confused for rust diseases, though rust spores are not present. 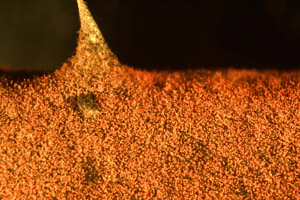 Figure 3. Clusters of Cephaleuros virescens sporangiophores (spore-bearing structures). When actively sporulating, the zoosporangia are borne on stalks, which give the "orange felt" appearance associated with the disease. 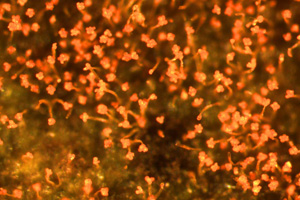 Figure 4. Individual sporangiophores (spore-bearing structures) with multiple zoosporangia (round ball-like structures filled with spores), as observed under a dissecting microscope. Each zoosporangium can produce multiple zoospores (mobile spores with propeller-like appendages that allow them to swim in water). Zoospores can spread by rain splash or active movement along wet canes. 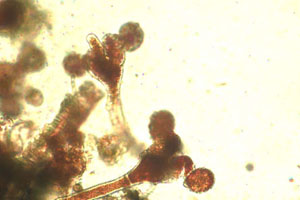 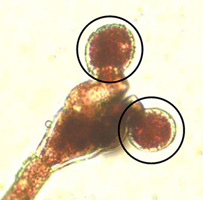 Figure 5. Multiple sporangiophores (top) and individual zoosporangia (circled in bottom image) at 400X magnification. When wet, zoospores are produced, which can form new infections on cane tissue. The infections generally start on the lower cane regions near the ground, but eventually they can cover the entire cane.

Through field observation and limited reports, it is assumed at this time that the disease cycle for C. virescens on blackberry is similar to that observed on other plant species, but again, this has not been studied in detail. Generally, colonies form where zoospores (mobile swimming spores) settled the prior summer. In the case of blackberries, spread has to occur from floricane to primocane in each year of continued colony production. Algal filaments spread to form a colony (Figures 1-2). As the colonies develop and mature in early to mid-summer, they form hair-like stalks (sporangiophores; Figures 3-5), which subsequently produce multiple zoosporangia (Figure 5). Under wet conditions, the zoosporangia in turn release multiple zoospores (swimming spores), each of which is capable of forming a new colony. Spores can actually swim to a new spot on a cane, but spread from floricane to primocane is likely through splashing water from summer rains. Producing prolific numbers of viable spores, this alga can be aggressive. The disease cycle takes 8-9 months to complete. 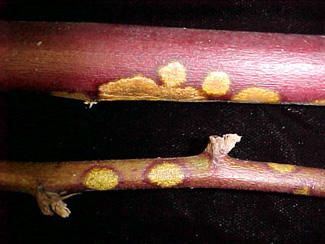 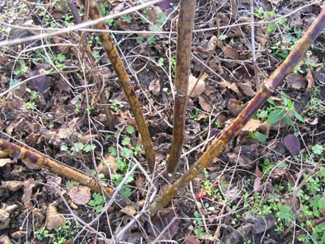 Figure 6. Yellow to orange velvet-like colonies formed by Cephaleuros varescens on a thornless blackberry cane. Orange felt forms yellow to orange spots starting at the base of the canes in the late spring or early summer. Spots become more pronounced each fall. [Photo: Submitted through Distance Diagnostics through Digital Imaging by Jerome Ethridge, Seminole Co., Ga.]

Initial symptoms are observed as colonies develop on canes. Orange felt is first characterized by the appearance of yellow, disk-shaped spots on the canes (Figure 6), which are usually more prevalent toward the cane base. The disease is later characterized by orange spots which are often blotchy or velvety in appearance. The orange color results from the production of haematochrome pigments by the spore-producing structures as they mature. Spots often coalesce (merge) under wet, humid conditions — virtually covering the entire cane; they can appear in the late spring, but are more prevalent throughout the summer and fall as the colonies develop. This disease is often confused with rust diseases of blackberry, since the spots are very orange in appearance as they mature. The two can be easily distinguished microscopically, however. In addition, rust spores readily rub off, forming a rust stain on whatever surface they touch; lightly rubbing orange felt colonies does not cause a stain.

With other algal diseases of plants, copper sprays have been found to reduce disease. However, this is not the case with orange felt, and numerous trials have shown that copper products have limited if any efficacy for managing this disease. Rather, phosphonate fungicides, such as those containing potassium phosphite, are the only chemical materials that have provided significant control. Applications starting as soon as primocanes emerge and continuing through the fall are recommended. Follow label directions carefully, as phytotoxicity can occur with these materials when applied in concentrated solutions or with some other chemicals.

Chapman, R.L., Henk, M.C. 1985. Observations on the habit, morphology, and ultrastructure of Cepha-leuros parasiticus (chlorophyta) and a comparison with C. virescens. J. Phycol. 21:513-522.

Holcomb, G.E., S.R. Vann, and J.B. Buckley. 1998. First report of Cephaleuros virescens in Arkansas and it occurrence in cultivated blackberry in Arkansas and Louisiana. Plant Disease 82:263.