When the stone fruit tree moves into its bearing years, it requires a shift in emphasis from exclusive attention to vegetative development for building a tree structure. The new emphasis requires balance between maintaining enough vegetative growth to promote adequate fruiting wood and return bloom for the following season’s fruit crop and managing the current season’s fruit crop. Too much tree vigor during summer months will cause shading of developing fruitwood, limiting its size and the number of flower buds it will produce. If enough shading occurs, the fruiting wood will be moved up the axis of the tree, reducing yield and increasing the cost of managing a taller tree.

Proper fertilization management is central to keeping the tree in proper balance for the bearing years. Bearing trees, trees entering their third leaf, should be capable of producing sufficient fruit to justify a production management program. Generally nitrogen, phosphorus, potassium, calcium and magnesium are required annually. Annual testing is easy. Foliar sampling can be done in July. Simply collect the fourth fully expanded leaf from the tip of shoots at eye level around the periphery of the tree’s canopy, collecting about 20 leaves total. Dry these in a paper bag before sending them in for analysis. Your county extension agent can handle foliar tests for a small fee. Peach sufficiency levels are given in Table 1.

More than any other element, nitrogen controls growth and fruiting in plants. Nitrogen management presents the fruit grower with a dilemma. When the nitrogen level is optimum for fruiting, vegetative growth may be inadequate, and vice versa. Nitrogen interacts strongly with pruning and irrigation. For maximum fruit production, manage trees to produce maximum leaf area early in the season. This involves moderate pruning, establishing high nitrogen levels in the early season, early thinning, maintaining adequate soil moisture, and slowing vegetative growth just prior to harvest by depletion of nitrogen. Generally, we recommend you provide 60 pounds of nitrogen per acre annually for trees spaced 20 feet x 20 feet. This rate may change, however, based on a high or low crop yield and cultivar differences in tree vigor.

Research shows that peach tree survival greatly improves when the annual nitrogen fertilization is split, with some nitrogen applied in mid- to late August (after harvest but no later than September 1) and the remainder applied in late winter. Because the post-harvest nitrogen application is used to help maintain healthy foliage in the fall and improve winter hardiness of the tree, the amount applied at this time should be considered food for next season’s crop. So determine the annual quantity of nitrogen applied to a tree as that applied before harvest of next season’s crop — not the total applied during a calendar year.

While calcium nitrate is more expensive, it maintains a better soil chemistry than ammonium nitrate and, in some studies, calcium is shown to improve fruit quality.

Do not over-fertilize third leaf trees with nitrogen. Excessive nitrogen will encourage too much vegetative growth that will compete with developing fruit for the current season and with developing fruitwood for next season. When very vigorous growth shades the following year’s fruitwood, the tree produces fewer reproductive buds, and fruitwood in the lower, shaded areas of the tree is weak. A 30:30 pound split nitrogen recommendation for bearing trees should be altered depending on the vigor and fruit load of trees in the orchard. When trees have very vigorous growth during the season, reduce the rate of the late summer application or leave it off altogether; but if the fruit load is particularly heavy, increase the late summer application rate. Apply the post-harvest application under the dripline on bare ground or inject it through a drip irrigation system so the trees get most of the nitrogen. Apply the “spring” application of nitrogen in mid- to late winter. Proportionally, more fertilizer is needed if calcium nitrate is substituted for ammonium nitrate (i.e., the calcium nitrate requirement is generally two times the ammonium nitrate requirement). Make this application at least six weeks before bloom for early maturing varieties.

Fruit trees remove relatively little phosphorus from the soil each year. Only about 12 pounds of P2O5 per acre are removed by a heavy fruit crop. Developing trees are estimated to retain about 3 pounds P2O5 per acre (not returned to the soil by leaves and pruning). Therefore, trees require no more than 15 to 20 pounds P2O5 per year to maintain phosphorus once adequate levels (moderate to high) are established in the soil.

Potassium competes with magnesium and calcium for uptake in peach trees. Excessive levels of one may cause deficiencies of the others. Potassium leaches readily but can accumulate in the subsoil, making it unavailable for tree uptake. Once adequate levels are established, adding 50-80 pounds of K2O per year should maintain potassium in most orchards. The source of potassium in commercial fertilizer usually should be based on economics. Avoid potassium chloride (muriate) where large, corrective quantities are added.

Liming annually to keep the soil pH in the proper range will maintain the magnesium level if dolomitic lime is used. When magnesium is adequate, hydrated lime may be used. If has a faster reaction time relative to pH adjustment and can provide some of the calcium requirement for the tree. Another source of calcium is calcium nitrate. This form of nitrogen is preferable because it does not have the pH lowering impact of ammonium nitrate, and it provides some calcium, which is important for fruit set and fruit integrity as well as overall tree health.

Providing supplemental irrigation prior to pit hardening when cell division is occurring adds to potential fruit size. Measures taken to increase cell division help guard against fruit cracking when irrigating in the month prior to harvest.

In peach, optimal productivity is experienced with rain or irrigation at intervals of no longer than one week. During peak water use periods, individual peach trees consume 36-45 gallons per tree per day. On a weekly basis, this is 252-315 gallons per tree. At a tree spacing of 16 ft. x 20 ft. (136 trees/acre), this comes to 34,272-42,840 gallons of water per acre of orchard. One acre-inch of water equals approximately 27,000 gallons. Therefore, actual water consumption for 1 acre of peach trees during peak water usage is between 1.3 and 1.6 acre-inches of water per week. Thus you should operate an irrigation system that delivers 12 gallons of water per tree per hour 21 to 26 hours weekly or 7 to 8.5 hours three days per week at peak demand if there has been no rainfall. An irrigation calculator that considers accumulated rainfall is available from the University of Georgia College of Agricultural and Environmental Sciences at the Peach Irrigation Scheduling System. 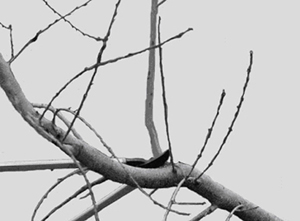 During the growing season, remove upright, vigorous shoots (or water sprouts) [Fig. 1]. Water sprouts compete with developing fruit for sugar and water resources, and they shade the fruit, reducing peel color. They also com-pete with the fruitwood (shoots that will produce fruit during a subsequent season) growth for the following season, reducing the strength of the return bloom. Just at the end of the dormant period, during early bloom, prune the tree to maintain its form. Remove any remaining upright growth and diseased wood. In addition, thin out the canopy so the tree will not produce so much fruit that size becomes an issue. First, remove shoots growing toward the interior of the tree and those that will interfere with the growth of more desirable shoots.

Left to their own course, fruit trees will bear many more fruit than can grow to adequate size if they all make it through the late frosts of February through March. Proper hand thinning or judicious pruning, however, can lead to an optimal peach crop. Generally, we advise removing fruit to a spacing of 6 inches along shoots on the outer portion of the canopy and 8 inches along shoots in the shaded portion. That sounds pretty easy, but there is more to thinning a tree than just dropping some fruit on the ground.

“Timing is everything,” they say. In the case of thinning fruit, that’s absolutely true. Every week after bloom that the tree carries too many fruits can cost 3 to 6 percent in fruit size. Earlier thinning also improves the crop yield and fruit size you can expect the following year, because the following year’s fruit buds are being produced while fruit is still on the tree. Earlier thinning will allow more water and nutrients to be available not only for this year’s crop but for next year’s developing buds as well.

If thinning blooms for very early varieties, be careful to leave extra flowers to hedge bets against a late frost. Thin to two or three flowers every 4 inches along a shoot — two flowers/4 inches near the end of the shoot and three flowers close to the base. Be sure to remove only fully opened flowers, saving the less mature flowers to withstand a late frost if it comes along. You can follow that practice two to three weeks later by removing small fruits to 6- to 8-inch spacing. Although making two trips to the tree is laborious and time-consuming, it’s effective.

The orchardist can use yet another method of reducing fruit load per tree without the labor and time requirements of blossom and fruit thinning. Pruning during dormant season (after Valentine’s Day to prevent frost damage from a late frost) can reduce the amount of hand thinning by 10 percent. Best of all, if you do it properly, you can increase the tree’s yield by 12 percent or more. You may wonder why removing shoot tissue that could bear fruit will improve the yield. There are two reasons: (1) The crop load to which the tree will be distributing water and nutrients will be lowered to a level the tree’s system can handle, and (2) the amount of unnecessary vegetative (shading) growth will be reduced. In other words, this pruning can bring a tree into a balance that favors optimum fruit production. Research reveals that removing all shoots shorter than 12 inches led to greater numbers and size of fruits and in many more pounds of fruit per tree. In addition, remove extremely vigorous upright shoots that provide excessive shading and do not bear fruit efficiently.

Have a question? Contact your local UGA Extension office to find out how our team of county agents can assist you.
Set County Preference
Related Publications