A relatively new peach tree training system is being adopted by some southeastern peach growers; it is an easy, low-maintenance system that can be used even in the home orchard.

Trees trained to this system, known as the perpendicular-V system, are most often planted fairly close within the row, but standard distance between rows is maintained to allow enough space for equipment movement through the orchard and light penetration into the canopy. Perpendicular-V tree training has occurred in response to increasing land and labor costs. This intensive practice has come about in stone fruit production because the analogous dwarfing rootstocks found in apple production have been unavailable to control excessive vigor in stone fruit trees. The perpendicular-V system relies heavily on cultural practices to control the vigor of a simple tree structure.

The ideal intensive orchard system allows early production of higher than standard yields (during the first 2 to 6 years) but can be easily managed in subsequent years delivering, at minimum, yield similar to those of the standard orchard system. The key to accomplishing this goal is preventing the excessive vigor that will compete with developing fruit wood.

The perpendicular-V system, as developed at the Kearney Agricultural Center in Tulare County, California, benefits peach production in the following ways:

When planting trees in this high-density orchard system, they are spaced 6 feet within the row and 18-20 feet between rows (330-372 trees/acre). You can reduce the between row spacing to 12-14 feet if an equipment path is not necessary, such as in the home orchard setting.

Immediately upon planting, trees should be headed back to a height of 20-30 inches and any lateral shoots should be removed, as with the open center system. In the spring when scaffold growth is 15-24 inches long, select two primary scaffolds that are oriented in the same plane, perpendicular to the row. These branches should be oriented 25-40E from the vertical, forming a V. This early scaffold selection during the first growing season directs growth into the two primary branches, since those branches will not be competing with other branches of equal size for nutrients and water. In addition, the scaffolds are easier to see, get to and remove if selected earlier. It is also less stressful to remove a small amount of leaf area during cooler months than in mid-summer.

Do not head back or bench cut the selected scaffolds. Unnecessary heading cuts cause excessive water sprout growth, which increases shading and summer pruning cuts. If any other strong branches (vigorous vertical shoots) originate higher on the selected scaffolds, how-ever, you may find that they need to be removed to establish or maintain the V shape of the tree. This early tree training may need follow-up during mid-summer to remove any unwanted vigorous growth. If you observe water sprouts forming in the tree crotch or along the scaffolds, these can easily be removed by hand with a quick tearing motion if they are caught early. Early removal of the sprouts in this way prevents the return of multiple sprouts in the place of a single sprout. Be careful not to remove tender shoots that can bear fruit in the following year.

During the second leaf, the first dormant pruning following risk of frost (early February) will be relatively easy if the primary scaffolds were selected during the previous spring. Remove vigorous, heavy non-fruiting wood and maintain only enough fruiting wood to support 18-24 fruit per scaffold, depending on the variety, assuming little fruit bud loss due to late spring frost. That many fruit would be produced on 8 to 12 fruiting shoots per scaffold, with thinning 2-3 fruit per fruiting shoot. In subsequent seasons, that fruit load will be increased to 50-75 per scaffold. Summer pruning (early to mid-May) of the second leaf trees is again pretty simple and quick. It amounts to little more than water sprout removal, taking care not to remove fruiting wood. A vigorous orchard may benefit from another pruning in July or August to remove water sprouts or vigorous vertical shoots that compete for the extension growth of next season’s fruiting wood. Avoid severe pruning late in the growing season that may stunt tree growth or make the tree sensitive to early freeze events before trees enter complete dormancy. Most orchards will not need this second summer pruning. 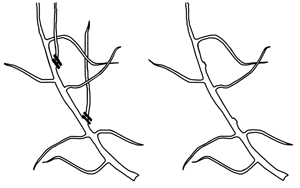 The emphasis of this system is to catch competing water sprouts and excessively vigorous vertical shoots early so they do not shade out other growth that will be capable of initiating flower buds. Excessively vigorous shoots or sprouts do not tend to produce many flowers and, therefore, are not considered to be good fruiting wood. By careful maintenance of wood that is capable of fruiting, you can avoid early loss of fruiting tissue in the lower part of the canopy, which can be shaded out as the tree ages. In the absence of dwarf stocks for peaches, the use of this simple training system that employs judicious pruning decisions can reduce vigorous growth and improve the overall production of each tree or acre.