Elevated levels of iron (Fe) and manganese (Mn) are two of the most common water quality problems in Georgia's groundwater (Figure 1). These problems occur statewide in wells that access both shallow and deep groundwater sources. 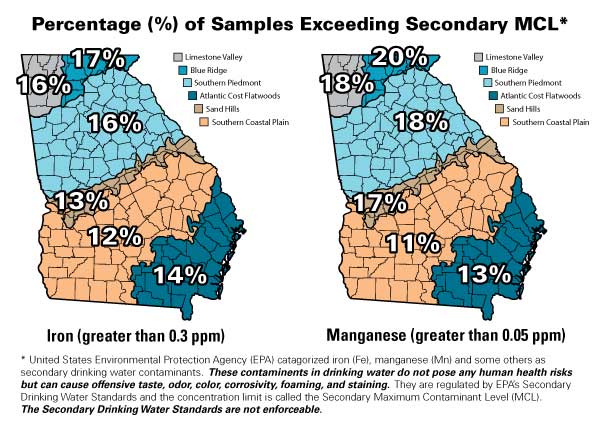 Figure 1. A graphical summary of the statistics for iron and manganese concentration above their secondary MCLs based on over 44,000 household well and municipal water samples that were analyzed between January 1, 1993, and June 30, 2012, at the University of Georgia's Agricultural and Environmental Services Laboratories.

What Problems are Associated with High Iron and Manganese Levels?

Adverse health effects are not the main concern when household water contains high levels of iron and manganese. However, these metals can create an unsightly appearance, unpleasant taste, and stain plumbing fixtures, porcelain, and laundry.

Iron bacteria do not cause illness!

Iron (Fe) gives water a bitter, metallic taste; creates reddish-brown stains in sinks, fixtures, laundry, and toilets; and promotes the growth of iron bacteria in plumbing. Iron bacteria use iron in the water as an energy source and form slimy growths or gelatinous masses in plumbing. When iron bacteria invade your well or plumbing they can become a serious problem, plugging filters and pump screens or causing an unsightly mess. The slimy or gelatinous mass of iron-bacteria colonies may also look like oil suspended in the water.

Manganese (Mn) gives water a bitter, metallic taste and creates suspended specks, sediments, and stains, which are often observed in sinks, fixtures, laundry, and toilets. These may range from dark gray to black in color. Elevated manganese levels have also been described as causing diminished flavor and color of cooked food.

At What Level of Iron or Manganese Will Staining Occur?

Before you have your water tested by a laboratory, you may see signs that the water contains iron or manganese. Plumbing fixtures will become stained reddish brown or dark gray to black. These stains will be difficult to remove with common household cleaners. Using chlorine bleach in combination with high iron levels in water will permanently stain laundry.

"Iron bacteria" can be a problem when iron concentrations are as low as 0.01 ppm, much lower than the concentration that causes stains!

Why are Iron and/or Manganese in my Well Water?

Groundwater environments are generally low in oxygen. Iron- and manganese-containing minerals in soils, rocks, and sediments dissolve more rapidly in such low-oxygen conditions. This natural process of iron and manganese being released into the groundwater is not considered contamination; it is the inherent nature of some groundwater. As this water is pumped to the surface and exposed to oxygen, the process will reverse and the dissolved iron and manganese will precipitate or come out of the water forming colored sediment.

What Should I do if I Suspect I Have High Iron and/or Manganese in my Well Water?

It is recommended that you begin with a basic water test through your county Extension office. Because it may be necessary to sample for iron in water at the wellhead, as opposed to an indoor faucet, consulting your Extension agent prior to sampling is the preferred first step.

Both iron and manganese can be removed through treatment.

Manganese removal is more straightforward than iron removal, though the two problems frequently occur together. The oxidation process that causes manganese and iron to stain your plumbing and laundry may also be used to remove these elements from your drinking and cleaning water. Physical treatments (aeration pumps) or chemical treatments (chlorine bleach, green sand—permanganate) may be used to oxidize manganese, causing it to form a sediment that can be removed by filtration. Water softeners (ion exchange) are another alternative. However, water softeners may only be effective up to 5 ppm of combined iron and manganese.

Oxidation can also be effective in removing iron from household water; however, based on your observations and the results of a basic water test, the most appropriate treatment system can be prescribed. For example:

When the presence of iron bacteria is observed, oxidation by chlorination is the preferred treatment because it both kills iron-bacteria and removes the iron. The level of iron or manganese in your water can be used to determine the type of treatment that is best for your situation. Treatment systems can then be properly sized, installed, and maintained.

Further details on treatment systems are provided in UGA Extension Bulletin 939, "Water Quality and Common Treatments for Private Drinking Water Systems," available at your local Extension office and online. We recommend that you contact a certified water treatment professional to discuss these treatment options. Look for National Sanitation Foundation International (www.nsf.org) or Water Quality Association (www.wqa.org) certified treatment systems. Certification by one of these two organizations generally assures that the product will perform as specified.

Status and Revision History
Published on Mar 28, 2003
Published with Major Revisions on Jan 31, 2015