Coliform Bacteria in Your Water

Bacteria are common organisms in nature. They are very small in size. A pinhead can accommodate millions of bacteria. Living in numerous environments, bacteria perform both beneficial and harmful activities. Most bacteria are harmless to human health; however, some are "pathogenic," capable of causing disease.

Coliform are a large group of several types of bacteria from the same family. Most are abundant in soils, surface water and vegetation. Some coliform bacteria originate from human or animal fecal sources. Most coliform bacteria are harmless to humans, but some can cause mild illnesses and a few can lead to serious waterborne diseases.

What are Fecal Coliform?

E. coli is an abbreviation for Escherichia coli, a genus and species of bacteria. E. coli is the predominant fecal coliform bacteria found in the gut of warmblooded animals. The fact that it originates only in warm-blooded animals makes E. coli a better indicator than total coliform of the potential for human diseases. A relatively inexpensive common water test for bacteria will give you results for both E. coli and total coliform. The presence of E. coli in water indicates direct contamination with fecal matter. There are hundreds of strains (or types) of E. coli, but only some strains of E. coli are disease-causing or pathogenic themselves. One that has received much attention in causing sudden gastrointestinal disease outbreaks is the E. coli strain named "O157:H7," which lives in the intestinal tract of some cattle. While E. coli by itself is not generally a cause for alarm, it indicates the potential presence of other dangerous pathogens of fecal origin that are health threats, such as Salmonella, Shigella and others. Non-bacterial pathogens that may be present with fecal material include protozoans, such as Cryptosporidium and Giardia, and viruses. See Figure 1 for a better understanding about the interrelationship among total coliform, fecal coliform and E. coli. 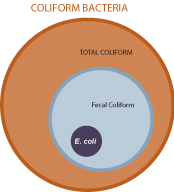 What are Indications of Bacteria in Drinking Water?

Bacterial contamination does not change the appearance, smell or taste of water. Testing by a laboratory is the only way to know if water contains coliform bacteria.

When Should You Test Your Water for Coliform Bacteria?

Test your well water for bacteria under the following conditions:

Lending agencies often require total coliform and E. coli tests for homes relying on private water supplies before the sale of property or when approving a new or refinanced home loan. Check with the Georgia State Drinking Water Agency (404-656-5660 / 404-656-0719, http://water.epa.gov/drink/local/ga.cfm) for any specific requirements. Realtors may consult EPA?s publication, “What Every Realtor Should Know About Private Drinking Water Wells; February 2005,” available at http://www.epa.gov.

Which Diseases Can Be Found in Water When E. Coli is present?

Water-borne disease-causing microorganisms or pathogens include:

If you think you might be sick from disease-causing organisms in your well water, discuss your water test results with your doctor. Children and the elderly are at higher risk of illness from waterborne disease-causing organisms. In some cases, household residents may acquire immunity to waterborne bacteria in their drinking water, but visitors to the home without this immunity may become ill after drinking the water.

Why Wasn't My Water Tested for All Microorganisms That Causes Diseases?

There are numerous disease-causing organisms in water, each requiring a different method of detection; therefore, it is impractical and expensive to test water for all of them. Instead, testing for indicator bacteria is the most appropriate way to determine whether or not a water supply is protected from microbial contamination. Usually, testing is done for three different types of indicator bacteria: total coliform, fecal coliform and E. coli, all belonging to coliform group. Positive detection of each has a different level of risk to human health.

How Do I Collect a Water Sample for Testing Coliform Bacteria?

Water samples for testing coliform bacteria should be collected in a special type of bottle obtained from your local county Extension office or testing laboratory. The sample bottle contains a white powdery substance, which is a de-chlorinating agent, to keep the bacteria alive. Never rinse this powdery substance out of the bottle. Water should be collected from a kitchen faucet that supplies water for drinking and cooking following the procedure suggested by the testing laboratory. The sampling procedure from the UGA water testing laboratory is available at your local county Extension office and at http://aesl.ces.uga.edu/forms. The testing laboratory must receive the samples within 24 hours of collection.

How Do I Interpret My Test Results?

The U.S. Environmental Protection Agency (EPA) regulates public water with a set of standards called "Maximum Contaminant Level (MCL)," but it does not regulate private wells. Private well owners are responsible for the safety of their drinking water. They can use the public drinking water standards as guidelines to ensure drinking water quality. The MCL for total coliform, fecal coliform and E. coli in drinking water is zero (none present).

Water containing any total coliform or E. coli should not be used for drinking or food preparation unless you boil it for a minimum of five minutes or the water is disinfected by other means. This also includes water used for making infant formula, ice or coffee, brushing teeth, and washing fruits and vegetables eaten raw. However, boiling for killing bacteria in water with problematic levels of other chemical contaminants (such as nitrate, lead, arsenic and others) may increase their concentration.

What Can Cause a Well to Test Positive for These Bacteria?

Bacteria in wells usually come from surface water that enters the well without first percolating/filtering through a sufficiently deep layer of soil and porous material above the water table. Your well can be contaminated if:

Contamination can also occur during floods when floodwater overtops the well casing. Newly drilled or serviced wells may also contain these bacteria due to material entering the well from the surface during construction. Shallow wells (less than 100 feet deep) are much more susceptible to contamination from bacteria than deep wells (greater than 100 feet deep). Shallow groundwater may not be sufficiently filtered by the soil and porous material above the water table to remove surface bacteria. Shallow groundwater can also be influenced by the on-site disposal of wastewater.

Other causes for contamination include:

Are there Seasonal Variations in Coliform Levels in Well Water?

How Common are Coliform Bacteria?

Coliform bacteria often contaminate private water systems in Georgia and throughout the United States. Based on around 6,500 water samples analyzed from 2005 to 2010 by the Agricultural and Environmental Services Laboratories of the University of Georgia, the occurrence of contamination of well water by coliform bacteria in Georgia is substantial, regardless of well type and age (Figure 2). 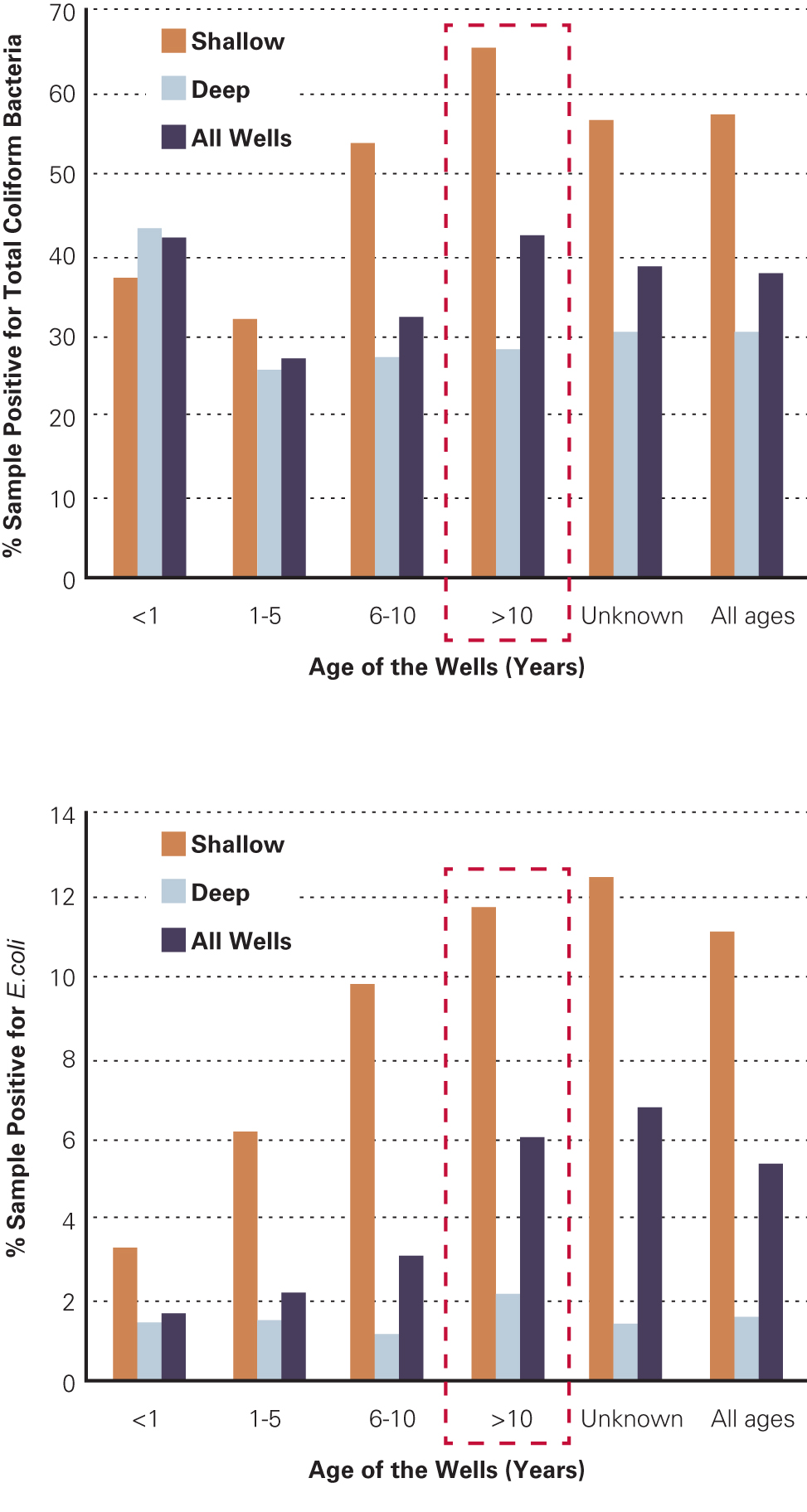 Figure 2: Total coliform and E. coli in waters from shallow and deep wells in Georgia in relation to the age of the wells (Source: Saha et al., 2011).

Remember, it's a good idea to test your well for bacteria once a year even if you have not had bacteriarelated problems in the past.

What Should Be Done to Correct Well Contamination?

The immediate remedy is to disinfect/shock-chlorinate the well with chlorine bleach; however, shock-chlorination may only be a temporary remedy. The most important consideration is to find and eliminate the source of contamination. Most bacterial problems are caused by improper well construction and/or may have been introduced during well maintenance or repair. Faulty construction can often be corrected to fix the problem. Some examples include:

As you attempt to find the source of contamination, evaluate both well location and well construction. Check the entire water distribution system for potential problem areas, including a garden hose without proper backflow prevention.

Shock-chlorination can disinfect the well, but unless the cause of contamination is discovered and corrected, the bacteria problem will return. Note that protozoa such as Giardia and Cryptosporidium are not killed by chlorination. Refer to the University of Georgia publication "Protecting Your Well and Wellhead" for assistance in locating the problem and to "Disinfecting Your Well Water: Shock Chlorination," for performing this task. These publications are available at your local Extension office and online at http://www.caes.uga.edu/ publications. For further assistance, contact your local county Extension agent.

Test your water again 10 to 14 days after all traces of the shock-chlorination treatment are gone. If the bacteria are still present after repeating this treatment, your well may have an unseen problem, or the groundwater itself may be the source of the bacteria. You can still use this water for your household by installing a continuous disinfection system such as a chlorinator, ultraviolet light or ozone system. Contact you local water treatment professional to discuss these options and their cost.