The larger canna leafroller (LCLR), Calpodes ethlius (Stoll), is a major pest of canna lily in Georgia. Native to Mexico, Central America, and the northern part of the South American continent, this pest is well established in the southern United States, including Georgia. The adult is also referred to as the Brazilian skipper, the canna butterfly, or the arrowroot butterfly.

The larger canna leafroller adult is a medium-sized, brownish skipper butterfly (Figure 1). The females (22–27 mm in length) are larger than the males (23–24 mm). The front side of the first pair of wings has five clear spots and yellow colored hairs on the lower margin. The front side of the second pair of wings has three clear spots. Similar to other skipper butterflies, LCLR is an erratic and fast flier and consumes nectar from flowers. In Georgia, adults start laying eggs in mid-May and undergo multiple generations through the summer. The attacks on plants persistently continue until the temperature cools down in the fall. 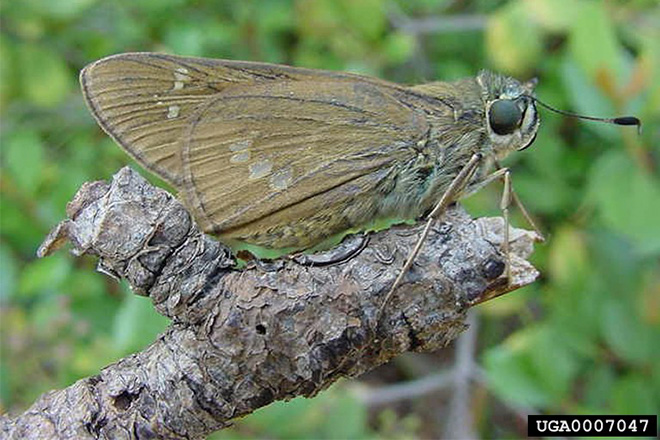 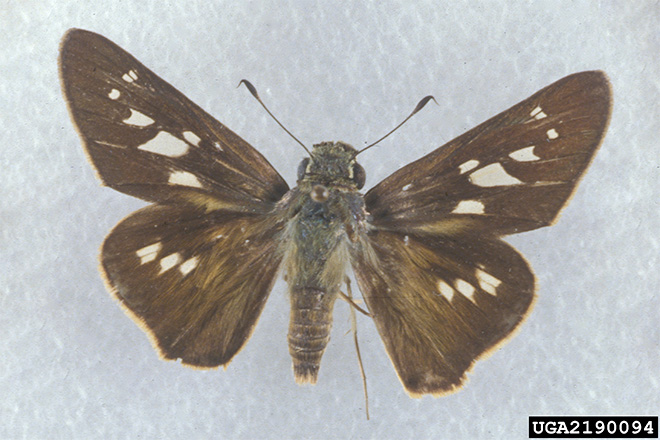 The eggs are about 1 mm in diameter and are visible by the naked eye (Figure 2). Pale green colored eggs are laid singly on the upper and lower leaf surface of canna. Sometimes, several eggs can be found on a single leaf. A day after laying, the eggs turn into a pinkish color. A few days later, the eggs hatch. Larvae initially feed on the leaf margin creating a flag leaf (Figure 3A). Then the larva ties the leaf flap with the rest of the leaf using silken strands. A few days later, the larva systematically rolls the entire leaf (Figures 3B and 3C). The caterpillar feeds within the roll and pushes out the frass pellets (excrement) from the leaf rolls. The leaf roll provides shelter and protection from the sun and natural enemies. The greenish, naked, or transparent larva has a distinctively large head capsule (Figure 4). Initially, the head is black but turns orange with black triangular marks in the later stages (fourth and fifth stage larva) of larval development (Figure 4C). Because the caterpillar feeds on green leaves, the color of the caterpillar appears green. The larvae molt five times before transforming to pale green pupae within the leaf roll. 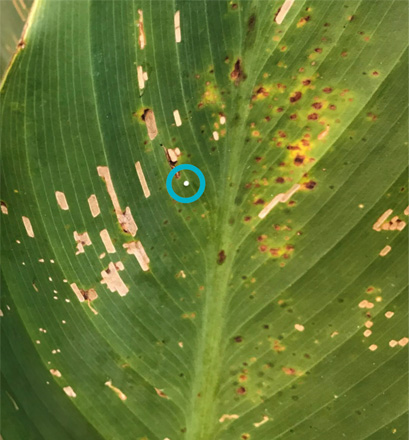 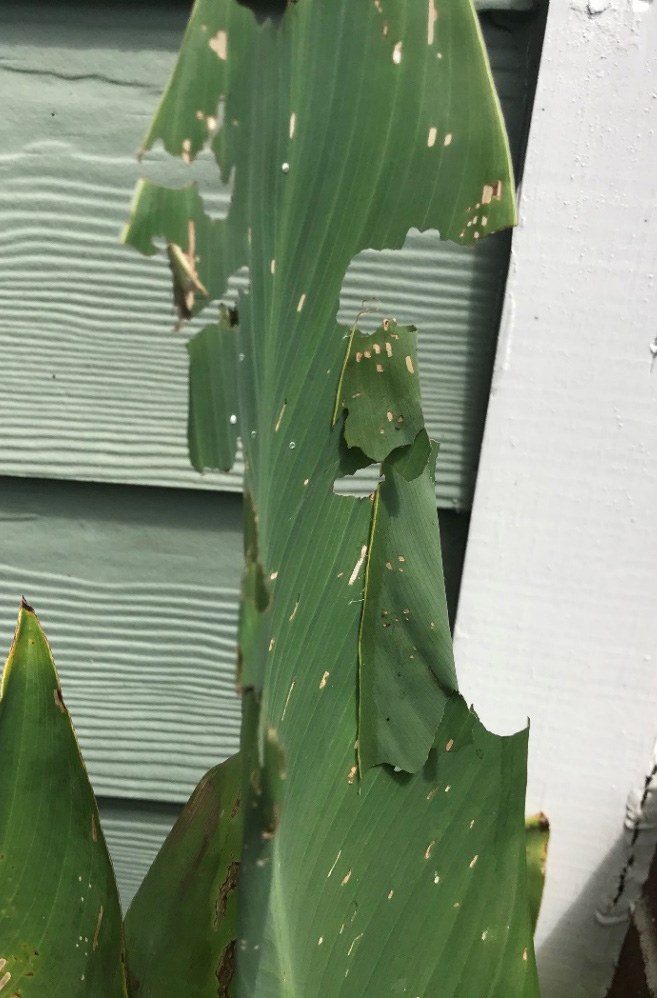 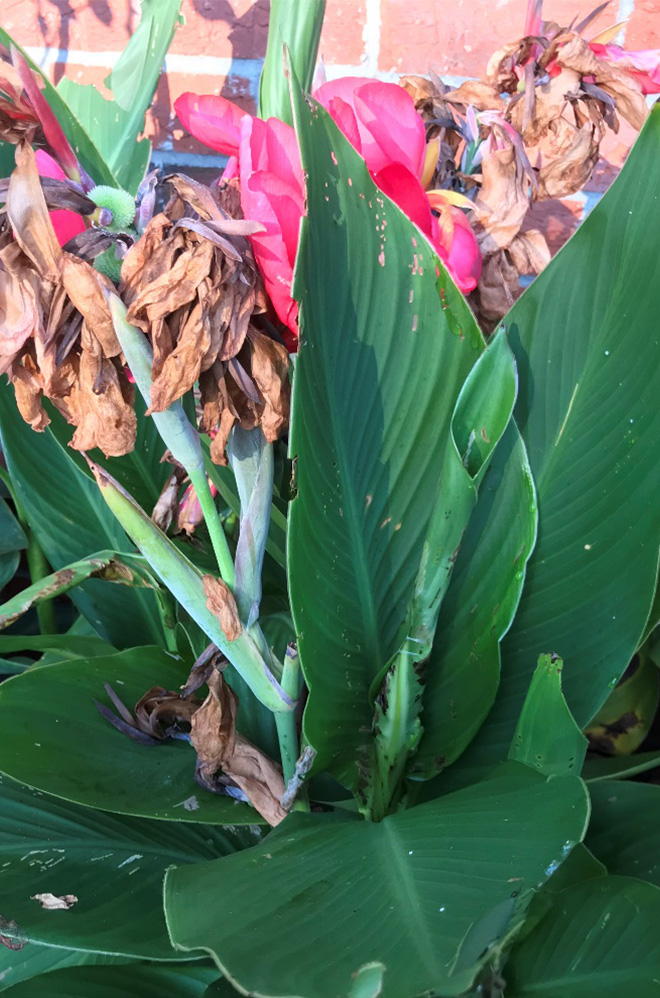 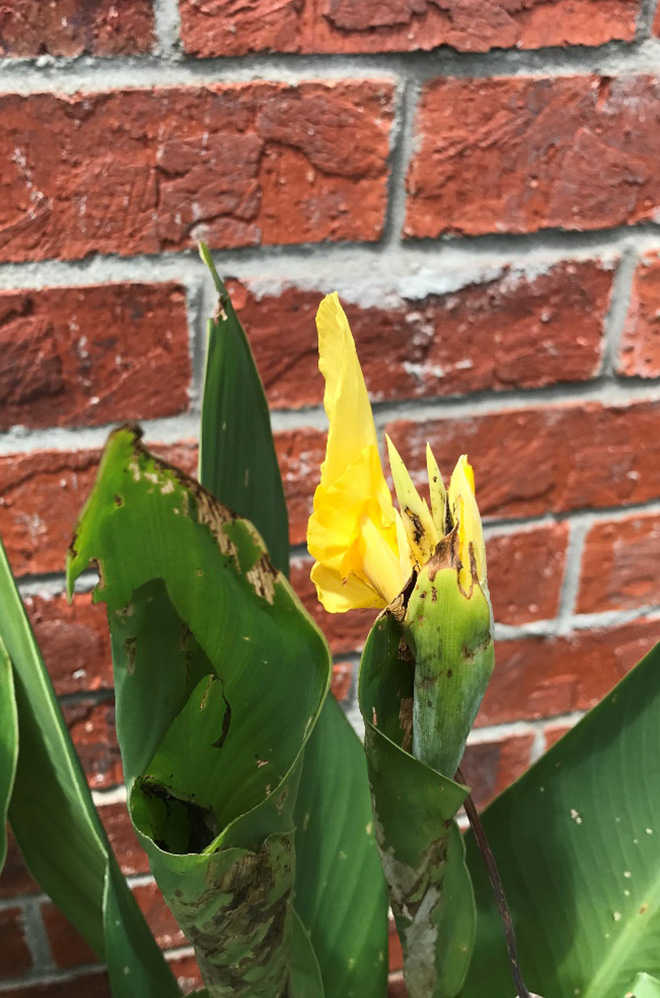 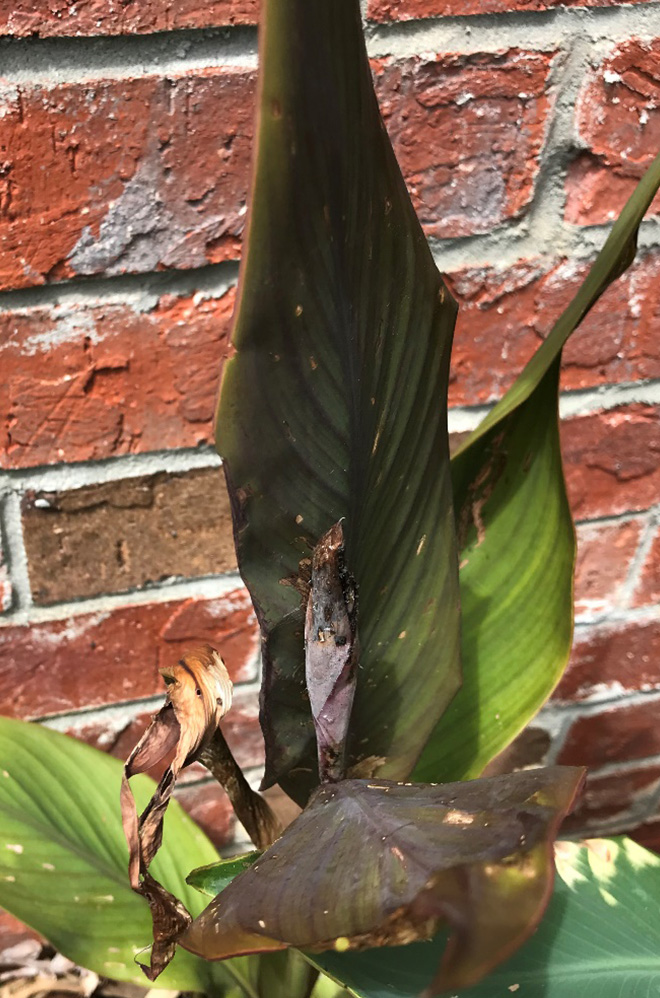 Figure 3. Larger canna leaf roller damage. (A) Symptom caused by early larva by stitching the flag leaf, (B and C) feeding after rolling the leaf, and (D) feeding damage on the developing flowers. Photos: Shimat Joseph. 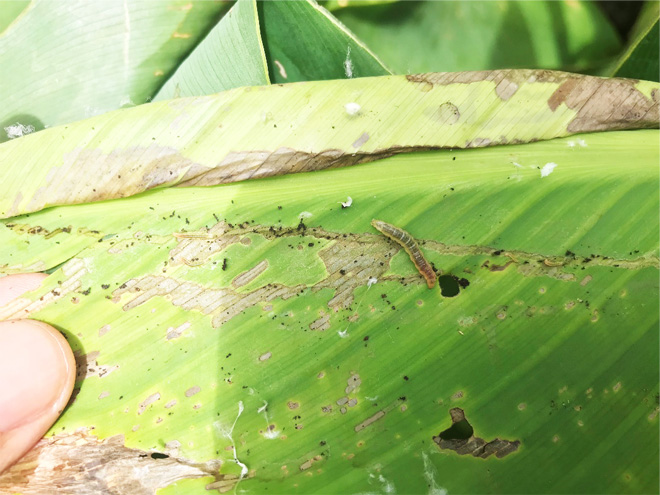 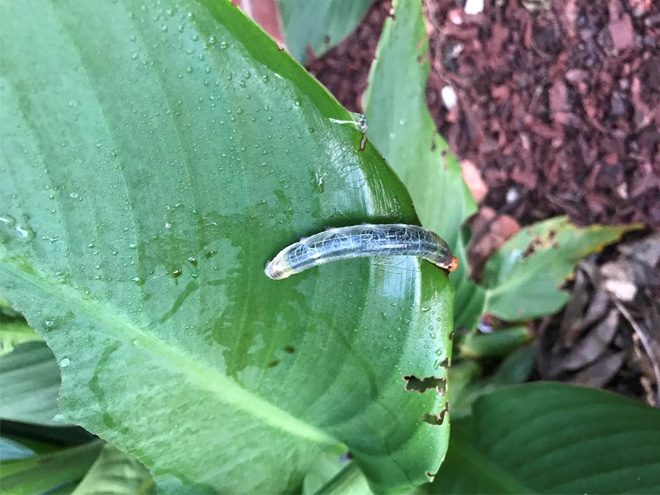 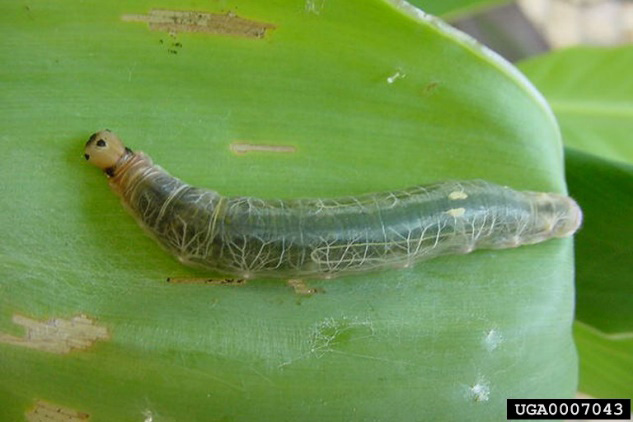 Larger canna leafrollers mostly attack plant species within the Cannaceae family. The only other family that LCLR has been found to attack is West Indian arrowroot (Maranta arundinacea L.). Leaf rolling can cause severe damage to canna plants when most of the leaves are rolled. Any new shoots that emerge from the rhizome are quickly attacked, and plants produce few flowers if not managed. The caterpillars also feed on the emerging flowers (Figure 3D) and the entire plant appears completely beaten and battered (Figure 5). 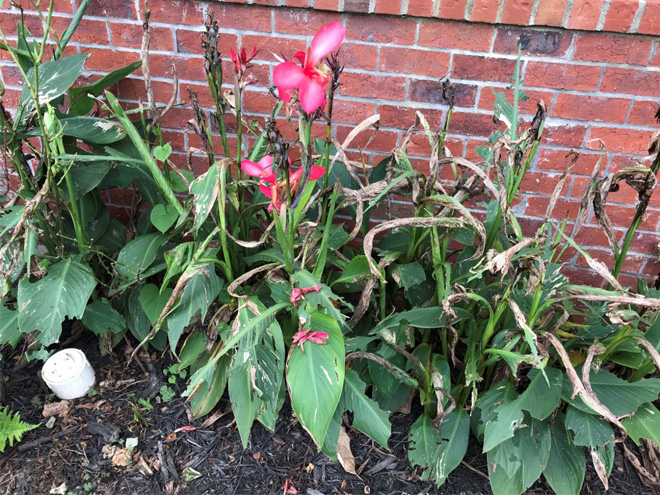 Scouting the leaves for young larvae starting in May at twice-weekly intervals is necessary as when they begin to roll the leaves is critical (Figure 3A). The larvae developing inside the roll can be mechanically killed by squishing with fingers. However, it can be overwhelming once the infestation becomes severe. Parasitic wasps—Brachymeria incerta attacking LCLR pupae, and Xenufens ruskini and Trichogramma minutum attacking LCLR eggs—previously have been reported from Florida. However, it is not clear if those parasitic wasps are active in Georgia. Moreover, significant suppression of the LCLR population through natural enemies can be challenging when pest numbers are high. LCLR adults tend to lay lesser number of eggs on green-leaved canna varieties than red-leaved varieties. Similarly, more egg-laying and damage from larval feeding was observed on red or orange f lower varieties than other flower colors.

The use of Bt (Bacillus thuringiensis) insecticide can give some control if the caterpillars are mostly in earlier stages. While contact insecticides such as pyrethroids (e.g., bifenthrin) can reduce the LCLR population, adequate insecticide coverage, meaning more water than usual (high water volume application), is necessary for control as caterpillars are hidden inside the rolls. A low water volume application may not reach those hidden caterpillars. The plants treated with insecticides should recover, depending on degree of damage, and start producing flowers. Systemic insecticides are available that are very effective against caterpillars, and these have the advantage that coverage is less important and the control can last all season.

Moore, M. B. (1928). A study of the life history and habits under Florida conditions of the canna butterfly (Brazilian skipper), Calpodes ethlius (Cramer), an insect pest of the canna [Master’s thesis, University of Florida].