Identification and Control of Leaf Rust of Wheat in Georgia 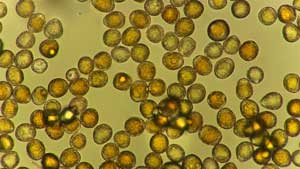 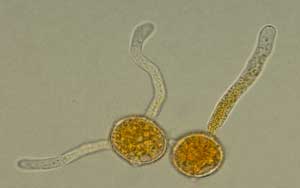 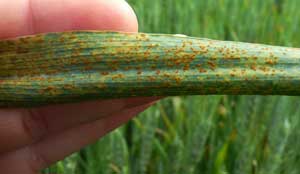 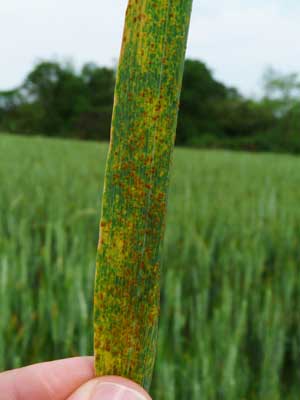 Flaky, reddish-brown, 1/16-inch (1.5 mm) in diameter pustules develop on leaves and sheaths (Figure 2). Pustules break through the leaf epidermis, and spores are easily dislodged by rain, wind, or contact. Pustules may be found early in the growing season on lower leaves, but they often appear in large numbers on the upper leaves after flowering. A single spore can invade a leaf and produce a pustule with thousands of new spores within seven to 10 days. This allows the disease to spread rapidly and cause extensive damage within a short time.

Several methods can be used to prevent, manage and treat wheat leaf rust. 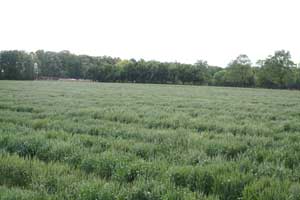 Use of resistant varieties is the best way to control wheat losses to leaf rust. Resistant varieties have one or more specific leaf rust resistance genes (denominated Lr genes). There are more than 30 different Lr genes available to date; however, most varieties have only a few Lr genes. In order to cause disease (i.e., be virulent) on a certain variety, the leaf rust fungus must be able to defeat all the Lr genes in that variety. The prevalence of different rust races is always changing in response to the different wheat varieties being grown with different Lr genes. Because new races of the fungus can develop, it is important to know the susceptibility of a given wheat variety. Table 2 lists the relative rust resistance of the wheat varieties recommended for Georgia in 2014-15. See Figure 3 for an example of wheat germplasm screening in Georgia. 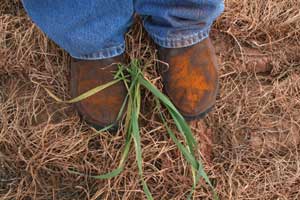 Check fields periodically during the season, especially when warmer temperatures start to develop. Use a hand lens to look for symptoms on plant leaves and examining a number of plants throughout the field. Spores of rust are often seen on the upper portion of the leaf. Field confirmation of rust spores can be made by rubbing your fingers over the top of the leaf. Spores appear as a red-brown, clay matter on your fingers. Infection usually starts at the bottom of the plant and moves up. Usually field symptoms are so conspicuous and unique that visual inspection will suffice for a rapid identification (Figure 4). However, if symptoms are not sufficient to identify the disease, then a physical sample might be needed for identification. Information on how and where to submit a sample is located at plantpath.caes.uga.edu/extension/clinic.html or by calling your county Extension office (1-800-ASK-UGA1).

It is recommended to implement practices that include the eradication of volunteer plants and crop debris, which can harbor inoculum over the winter. This cultural practice does not guarantee freedom from rust because urediniospores are carried long distances by wind. Avoid early sowing and excess nitrogen applications. 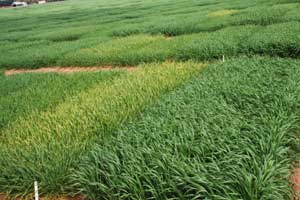 Figure 5. Evaluation of chemical options for control of leaf rust at the CAES Research and Education Center in Plains, GA. (Photo: Alfredo Martinez.)

There are several fungicides labeled for leaf rust on wheat. Generally there is no economic benefit from applying fungicides to control leaf rust when resistant varieties are grown. However, exceptions can occur. There are only a few varieties that are highly resistant to leaf rust, and there is some potential for use of fungicides. Possible disease race shifts may make it necessary to use fungicides. IF leaf rust is found in the field, a fungicide application is recommended. Protection of the flag leaf is critical for yield preservation. Due to constant changes in fungicide labeling, check the entire product label and/or contact your local county Extension agent for the most up-to-date information. Fungicides for managing leaf rust are found in Table 3. Additional information is found in the Georgia Pest Management Handbook (UGA Extension Special Bulletin 28 â?? www.ent.uga.edu/pestmanagement/). Always follow product labels for recommendations, precautions, and restrictions. See Figure 5 for an example of fungicide efficacy evaluations for wheat leaf rust control in Georgia.