Identification and Control of Powdery Mildew of Wheat in Georgia 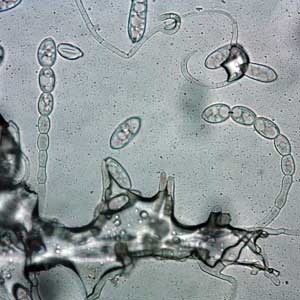 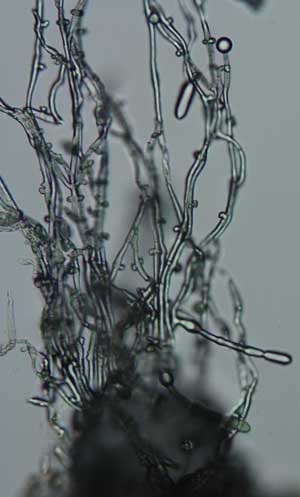 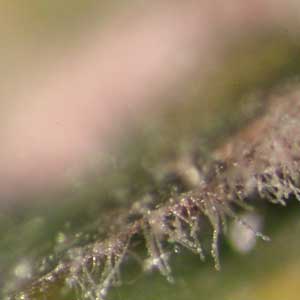 Powdery mildew produces a white to gray cottony fungal growth on the upper leaf surface (Figures 4 and 5). This disease may occur on any above ground plant part, but it is usually most prevalent on the upper surface of the lower leaves. The conspicuous white to gray patches of fungus appear early in the growing season. In Georgia, depending on the growing area, variety planted, and environmental conditions, the disease usually occurs from February to May. The white powdery patches or pustules produce large quantities of small asexual conidia (also called oidia) in long chains, which are easily dislodged by wind or rain. When powdery mildew is severe, the entire leaf turns yellow and dies (Figure 5). Small, black fungal fruiting bodies (cleistothecia) may be seen immersed in the gray fungal tissue later in the season (Figure 6). Powdery mildew can cause severe blighting of the upper leaves and can attack the head of susceptible varieties. 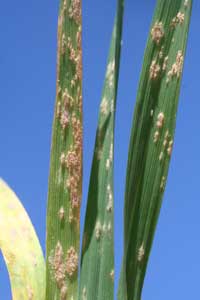 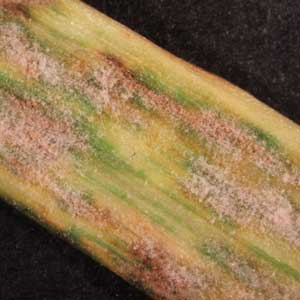 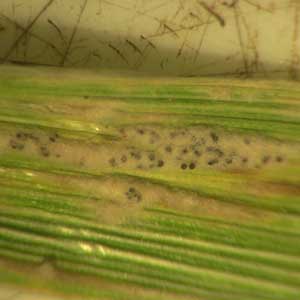 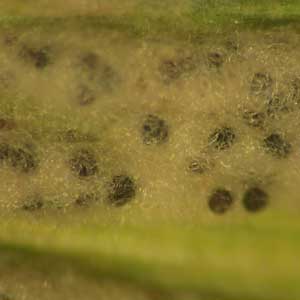 Powdery mildew is usually the first leaf disease to appear in the spring because the disease is favored by temperatures between 50 and 70 °F (10 and 21 °C). The disease usually declines after flowering, when temperatures rise above 75 °F (24 °C). Powdery mildew can infect plants in the fall and survive in the invaded tissue during the winter. Early infection can result in reduced tillering of susceptible varieties. Thus, spores may come from earlier infections within the field or from fields farther away. Dense stands, high nitrogen fertility, and rapid plant growth increase susceptibility. Under such conditions a variety listed as having "good" resistance may become heavily infected. As the stem elongates and temperatures increase, conditions become less favorable for powdery mildew.

Several methods can be used to prevent, manage and treat powdery mildew.

Check fields periodically and early in the season. Use a hand lens to look for symptoms on all parts of the plant and examine a number of plants throughout the field. Usually field symptoms are conspicuous and unique enough that visual inspection will suffice for a rapid identification. However, if symptoms are not sufficiently developed to identify the disease, a physical sample might be needed for identification. Information on how and where to submit a sample can be found on this Extension website or by calling your county Extension office (1-800-ASK-UGA1).

Use of resistant varieties is the best way to control wheat losses to powdery mildew. Because new races of the fungus can develop, it is important to know the susceptibility of a given wheat variety. A yearly description of varieties and their relative susceptibility to powdery mildew is given in the annual CAES Small Grains Performance Tests (for the 2013–2014 edition see annual publication 100-6) or the CAES Wheat Production Guide (view the 2014–2015 edition online).

Implementation of cultural practices that correct dense stands, nitrogen fertility, and rapid growth are recommended to manage the disease. Therefore, do not over-fertilize with nitrogen since this encourages heavy, succulent, susceptible growth. Lighter seeding rates improve air circulation and decrease disease. Crop rotation and clean plowing reduce the amount of overwintering pathogen structures in the field, although air-borne inoculum can negate these practices.

On all but the most susceptible varieties, powdery mildew confined to the lower leaves has little or no effect on yield as these leaves often naturally senesce before heading. However, protecting the flag leaf is critical to attaining high yields. Powdery mildew infections and development declines rapidly when daytime temperatures consistently reach 72–75 °F (22–24 °C) and the relative humidity (RH) falls below 85%. Typically, these conditions happen before flag leaf emergence in the wheat-growing areas of Georgia. Therefore chemical control is only warranted on highly susceptible varieties in powdery mildew-conducive years. Several fungicides are currently labeled for powdery mildew on wheat. Fungicides should not be applied until flag leaf emergence, unless a variety is susceptible. If a fungicide is applied too early, the plant (flag leaf) will not be protected from other foliar diseases during the latter half of the grain-filling period. Due to periodic changes in fungicide labeling, check the entire product label and/or contact your local county Extension agent for the most up-to-date information. Guides for fungicide use can also be found in the annually updated CAES wheat production guide and/or the Georgia Pest Management Handbook (UGA Extension Special Bulletin 28). Always follow product labels for recommendations, precautions, and restrictions.