Alternatives to Synthetic Herbicides for Weed Management in Container Nurseries

Weed management is one of the most critical and costly aspects for container nursery production. High irrigation and fertilization rates create a favorable environment for weed growth in addition to crop growth. Weeds can quickly out-compete the crop for light and other resources, reducing the rate and amount of crop growth as well as salability (Berchielli-Robertson et al., 1990; Norcini and Stamps, 1992). Weed management in nursery production is most effectively achieved by preventative practices, primarily with the use of pre-emergent herbicides (Gilliam et al., 1990; Gallitano and Skroch, 1993).

However, there are valid reasons for managing weeds using alternatives to synthetic herbicides (Sidebar 1). Ornamental crops encompass a wide array of species, and herbicide products must be tested on each for effective, safe and legal use. Even when a product is labeled for a crop, it may not be sufficiently effective for the weeds present or may induce crop damage under certain circumstances. Finally, use of synthetic herbicides in greenhouses and other enclosed structures is often prohibited on product labels.

One of the most effective and economical means of avoiding weed problems is preventing their presence through exclusion and sanitation (Chappell et al., 2012; Diver et al., 2008; Wilen 2010; Sidebar 2). These practices prevent or reduce the number of weed seeds and propagules (bulbs, corms, rhizomes and stolons) that can grow and reproduce, compounding weed management efforts. The first critical step in reducing weed infestations is to follow adequate sanitation measures during propagation and liner production. Liners are often the initial source for new weed species into production areas (Chappell et al., 2012; Wilen 2010). Few, if any, herbicides may be used in this phase of production, necessitating reliance on sanitation and hand weeding. When receiving liners from an outside source, it is critical to monitor containers for weed emergence and to remove weeds before they reproduce and spread. If possible, visit liner and seed vendors to check out their sanitation practices before doing business with them. Additionally, equipment, containers, substrates and fertilizers used in production should not contain weed seeds or propagules (Case et al., 2005; Wilen 2010; Chappell et al., 2012). Simply washing equipment and containers and covering substrate storage areas can significantly reduce weed pressure.

Seeds are the primary source of weeds in production environments (Wilen, 2010). Considering the immediate nursery environment is the source of most weeds (Cross and Skroch, 1992), the elimination of seed-bearing weeds within and adjacent to production areas can greatly reduce weed incidence and severity. This may entail working with neighboring property owners to be effective. Surface irrigation water also may be a source of weed seed if not sufficiently filtered before application (Kelley and Bruns, 1975). To reduce weed introduction via irrigation water, weeds from the periphery of surface water supplies should be controlled prior to seed set. Irrigation intake pipes should be placed below the water surface yet high enough to avoid suction of sediment from the bottom of the water source. This is often accomplished using a floating dock system to suspend the intake pipe in the water column.

Regardless of prevention efforts, wind, equipment, birds and other animals (including humans) will eventually introduce weeds (Wilen, 2010). Non-chemical control of weeds is done on a very limited basis in the nursery industry; however, it is critical to scout regularly for invading weeds and deal with them before they mature and spread. Hand weeding is extremely labor intensive and thus an expensive control option (Mathers, 2003; Neal, 2003). In addition, it may be difficult to find laborers willing to work for wages typical of the geographic area where the nursery is located, particularly near urban areas.

Nonetheless, hand weeding is an integral part of any successful weed control program since even pre-emergent herbicides are not 100 percent effective in eliminating weeds. In field nurseries, mechanical cultivation is practiced, but typically as a supplement to an herbicide regime. Therefore, weed management should include regular scouting and hand weeding or mechanical control to prevent emerging weeds from maturing and dispersing seed. Nurseries should strive to create a culture where "no weeds" is everyone's mantra. 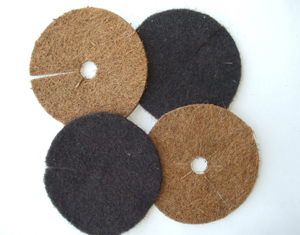 Mulch is applied to the substrate surface to create a physical barrier that inhibits weed seed germination and suppresses weed growth (Ferguson et al., 2008). Mulch is a traditional means of weed management in field nurseries and landscapes and may be adapted to container production (Case et al., 2005; Billeaud and Zajicek, 1989).

Two general types of mulch have been adapted to container production: disk barriers and loose-fill products. Disk barriers are permeable or impermeable products in the shape of a disk with a slit for placing the disk around a stem and on the substrate surface. Disk barriers include impermeable, disk-shaped solid plastic or cardboard lids, and permeable barriers composed of woven or particlebased products held together by resins or other binders (Chong, 2003; Mathers, 2003; Frangi et al., 2010; Figure 1; Sidebar 3). 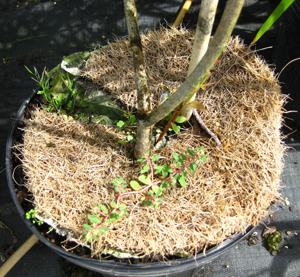 Figure 2. Gaps between the disk edge and container rim, along the installation slit and around the plant stem allow weeds to grow.

Disks can be useful for weed control, may reduce water loss from container plants and have been shown to neither positively nor negatively affect plant growth (Ruter, 1997; 1999). However, disks have issues of cost, handling, irrigation, fertilization and problems with fitting containers adequately to prevent weeds, especially with multi-stem plants (Chong, 2003; Mathers, 2003; Ruter, 1999). If utilizing impermeable disks, plants must be irrigated below the disk via drip irrigation to maintain adequate soil moisture. Additionally, fertilizer must be placed under the disk to maximize plant growth (Ruter, 1999).

Disks must be installed by hand, increasing labor costs. Disks must fit the container exactly or there will be gaps between the disk edge and container rim where weeds can grow (Figure 2). Even with exact container fit, there will be gaps along the disk installation slit and around the plant stem where weeds can grow. In addition, the disk system is limited to plants with a central leader because disks are not designed to fit around multiple stems. Finally, some disk products may be blown away or displaced by wind, resulting in exposed substrate where weeds can grow. Disks are usually removed before sale and often may be reused several times; however, both practices involve additional labor.

Loose-fill mulches are applied as a top-dressing to the container substrate (Smith et al., 1997; Mervosh and Abbey, 1999; Chong, 2003; Mathers, 2003; Case et al., 2005; Ferguson et al., 2008; Cochran et al., 2009). Many loose-fill mulches are agricultural byproducts that are locally available and inexpensive (Sidebar 4). The ideal loose-fill mulch provides little or no nutrients, dries quickly after irrigation, resists decomposition, applies easily, is cost effective, non-toxic to humans and crops, readily available and will be accepted by customers. Few products have many of these characteristics.

Weed control efficacy of loose-fill mulches generally increases with increasing depth of application (Smith et al., 1997; Penny and Neal, 2003; Cochran et al., 2009). Application of loose-fill mulches may be mechanized (e.g., during potting; Chong, 2003). However, there are challenges associated with this option. Some mulches may contain weed seeds or phytotoxic components. Organic mulches often facilitate weed seedling development and may reduce available nitrogen near the substrate surface if not composted (Billeaud and Zajicek, 1989). Spillage during handling and production is an issue. Most loose-fill mulching systems are considered more costly than an effective pre-emergence herbicide program, but an economic comparison of such systems has not been reported. 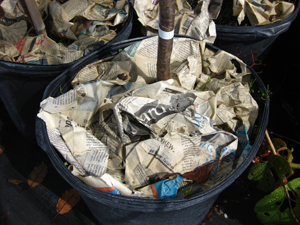 Figure 3. Crumpled newspaper may be used as a mulch. 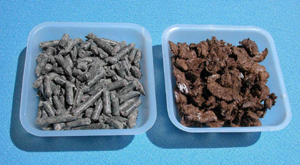 Figure 4. Examples of pelletized and processed and colored recycled newspaper that can be used as a mulch. 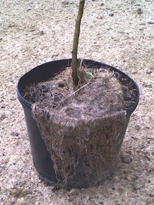 Figure 5. Ryegrass seeded around a deciduous plant acts as a living mulch in winter, dying in spring and serving as a mulch.

Living mulches are used with success by many field nursery crop producers (Diver et al., 2008) and can be adapted to container production, particularly with deciduous crops in winter (Figure 5). These living mulches or cover crops may be used as a seasonal ground cover that suppresses weeds without competing with crop production. Such systems must be customized to local conditions to find the right combination of crop, living mulch species and other compatible weed management practices.

Most other non-traditional alternatives to synthetic herbicides are not adapted to managing weeds in containers but may be applied around containers and in non-crop areas. For example, heat can be used to manage weeds in non-crop areas (Mathers, 2011). Heat acts to kill weeds by denaturing proteins in cell membranes and breaking down the cellular structure of the weed. Alternatively, heat can induce water within cells to boil, thereby exploding cells and desiccating the plant. Application equipment has been developed to apply heat via propane-generated flame, infrared emitters and direct application of boiling water or steam. Solarization, in which sunlight warms soil in a plastic-enclosed area, results in high temperatures that kill weeds, seeds and disease and pest organisms (Stapleton et al., 2008).

Alternatives to synthetic herbicides include natural chemicals, such as acids, soaps, oils and salts that can act as contact herbicides (Diver et al., 2008). These non-synthetic herbicides are best used as a targeted spray or in noncrop areas because contact can lead to damage of plants in production. It is important to note these products do not kill roots and repeated applications will be necessary for weeds that have the ability to regenerate from their roots.

For example, solutions of vinegar can be sprayed to damage weeds (Diver et al., 2008; Fausey, 2003). Vinegar is a product of fermentation containing about 5 percent acetic acid. It is more effective as a non-synthetic herbicide when concentrated to levels of 15 percent and 30 percent acetic acid by distillation and freeze evaporation, respectively. Acid solutions are believed to cause changes in plant cell pH that result in loss of cell membrane integrity and eventual death.

Plant-based oils such as cinnamaldehyde (the primary component of cinnamon) have been used as contact herbicides (Diver et al., 2008; Fausey, 2003). Oils are believed to cause disruption of cell membranes. Plant-based oils include clove, eugenol, lemongrass, citrus, thyme and oregano.

Other alternative products include hydrogen dioxide (Fausey, 2003) and plant byproducts. Corn gluten meal, derived from processing corn, has not proven effective in containers (Mervosh and Abbey, 1999; Wilen et al., 1999), particularly in high rainfall/irrigation areas. Mustard seed meal has shown promise for use with crops grown in the ground (Boydston et al., 2011; Handiseni et al., 2011) but has not been evaluated for use in containers. Finally, although there have been advances in biological control of arthropod pests and plant pathogens in nursery crops, no such strategies are currently available for weed control in nurseries.

1 This document is ENH, one of a series of the Environmental Horticulture Department, Florida Cooperative Extension Service, Institute of Food and Agricultural Sciences, University of Florida. Original publication date September 2012. Visit the EDIS Web site at http://edis.ifas.ufl.edu.