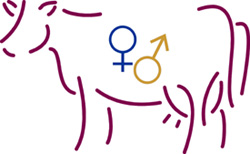 Reproductive management of dairy heifers is certainly one area in which many dairy producers can improve. Heifers are the most fertile animals in a herd and should have the greatest genetic potential. Dairy producers need to pay more attention to getting heifers bred sooner and breeding them to genetically superior bulls. Heifers should calve at 24 months. This is two months lower than the Georgia average. Heifers should be bred artificially to top A.I. sires to further increase the genetic potential and minimize calving difficulties. Currently, a lot of heifers are pasture bred to genetically inferior herd bulls and most producers raise their own herd replacements. Also, heifers are best suited for gender-selected semen because of their fertility.

Puberty in dairy heifers is more related to body weight than age. Heifers reach puberty at 30 to 40 percent of the average mature weight. At this time, the hormonal patterns that regulate the estrus cycles begin developing and result in the heifer coming into heat on a regular basis. The first few heats may be erratic and anovulatory (no ovulation). After a couple of cycles, heifers should cycle every 20-21 days (range 18-24 days).

Protein, energy, minerals and vitamins can affect reproductive function. Puberty may be delayed when under-feeding, diseases or parasites delay growth. Feed heifers a balanced ration based on their age and weight. Your veterinarian should be consulted for the most efficient worming and vaccination schedule to use on heifers in your area.Poor weight gains, lower conception rates, poor body condition, rough hair coats and elevated body temperatures have also been associated with cattle that graze fescue pastures infested with fungus. Growth of dairy heifers on fescue pasture can be affected by the level of fungus infestation. Most fescue pastures have a level of fungus that can affect conception rates.

Record heat cycles prior to the breeding season, and have a veterinarian examine heifers that exhibit abnormal cycles or are anestrus and not detected in heat.

Heifers should be at the proper weight and size for breeding at 15 months of age. This will allow heifers to calve when they are 2 years old. Research has shown that heifers that calve after 27 months produce slightly more lifetime milk. However, the higher costs to carry these heifers outweigh any increase in milk yield. Keep average daily gains below 2.2 pounds per day to avoid excess fat, which research has shown can show up in the udder and lower production. Producers should breed heifers around 15 months using the following table:

The only sure sign a heifer is in heat is standing to be mounted by another animal. Animals are only in heat for 8 to 15 hours. Therefore, it is important to check for heats twice daily for 15 to 20 minutes each over 70 percent of the heat activity period.

It is also important to watch for secondary signs of heat. These include a clear mucous discharge, mounting other animals, a red swollen vulva, nervousness, bawling, dirty flanks and head-laying on other animals. Blood found on the tail is not abnormal. Animals showing this sign were in heat one to two days ago and should be watched more closely in 17 to 19 days.

Successful reproductive management operations generally have several people in charge of both heat detection and artificial insemination. Someone must be responsible for getting the job of heat detection done accurately on a regular basis. All heifers should be clearly identified. Twenty-one day records should be kept on all cycling heifers.

When and where to watch for heat is also important. Animals on dirt or pasture are more active than on concrete. During hot weather, heifers should be watched late in the evening after the sun goes down. However, during winter, it is best to watch during the middle of the day when temperatures are generally the warmest. Moving animals from one location to another also increases activity.

Using top A.I. bulls on all heifers gives a producer an efficient and economical way to increase milk production. Results will show up two years down the road in the milk parlor. Daughters of A.I. sires have more than a 1,200-pound milk production advantage over non-A.I. sires.

Select a group of high net merit bulls to use on a group of heifers. Select those bulls from a specific group that have been shown to produce the fewest difficult births. Select bulls that are the best buys both economically and genetically.

Pasture breeding with natural service may be convenient and possibly efficient, but should not be used for genetic reasons and because bulls can possibly be subfertile. Also, bulls can be dangerous. They have been known to hurt or kill people each year as well as carry diseases.

Cull infertile breeding heifers of ample size, as they generally do not get any better. After breeding, a veterinarian should check animals for pregnancy at 45 to 60 days.

One popular method of improving heat detection and getting more heifers bred is through estrus synchronization. Dairy farmers cite heat detection as the major reason for not breeding heifers artificially. Having several animals in heat at the same time makes it easier to detect when animals are in heat.

Management of the synchronized heifer is of utmost importance for good results. Synchronization products do not increase or decrease the fertility of the heifers. They only change the timing. For optimum results, heifers in the synchronized group should be on a good plane of nutrition, be in good physical condition, be current on internal andexternal parasite control and be cycling regularly (18-24 days). Prostaglandins require a functional corpus luteum (CL) on the ovary for the heifer to respond. If the heifer is between days 5 to 16 of her cycle, she should come into heat 36 to 72 hours after injection of the drug.

The producer generally picks a day, (for example, Monday morning). Heifers are injected with prostaglandin according to the label. Any heifer observed in heat during the week is inseminated. Most heifers will come into heat by Friday. Any heifer not seen in heat is re-injected the following Monday morning and the same procedure is followed. Any heifer not observed in heat and inseminated after three weeks of injections is recommended for an examination.

Animals can be monitored for heat activity six days prior to first injection and bred on standing heat. This may be extremely useful to see if a group of heifers is cycling. Animals must be cycling for prostaglandins to work. There are several modifications of this program shown below:

Heifers can also be brought into heat economically with melangestrol acetate (MGA). MGA is an economical and easily available synthetic progestin that can be fed in grain for 14 days. MGA has received clearance for use in reproductive classes of dairy and beef females. After withdrawal from the ration, animals come into heat. However, this heat is subfertile and animals should not be bred. Gonadotropin releasing hormone (GnRH) and PGF can then be used to breed heifers as shown below. A cleanup insemination can be used for those not in heat by 72-80 hours.

Recently, an estrus protocol for heifers has been introduced that decreases the number of days animals are on MGA. The 7-11 Synch protocol has been reported to result in a higher degree of synchrony.

Dairy producers should consider new options in estrus synchronization when breeding groups of heifers, especially if heat detection is a problem. New technology using intravaginal progesterone implants are useful synchronizing and breeding heifers. The CIDR (Controlled Internal Drug Release by Pfizer-Pharmacia Animal Health) is now available for use on heifers as shown below.

The CIDR protocol can be modified for timed AI by giving GnRH on Day 1 and a second shot 72 hours after removing CIDR (at the time of AI).

Move heifers into the calving area two weeks prior to calving. Provide shade to reduce stress. Like for cows, give grain and gradually increase it to allow the rumen time to adjust prior to calving. Observe heifers close to calving at frequent intervals. Like cows, heifers should be given a clean, dry place to calve. A grassy pasture or bedded maternity pen works best. Calving assistance should be given if the heifers fail to calve within 2 hours after onset of labor. Disinfect hands and equipment, and ask for help from your veterinarian when you need it.

Use the following guidelines in the reproductive management of heifers: