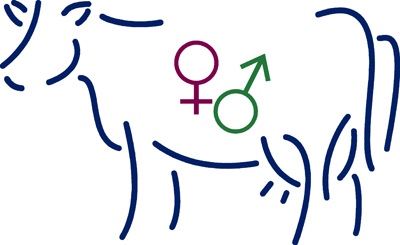 It is well known that daughters of sires available through artificial insemination (A.I.) produce more milk than daughters of sires used in natural service. Cows sired by proven A.I. sires have been shown to be $148 more profitable in a fluid milk market during their lifetimes. These daughters live one month longer and produce more than 1,400 kg more lifetime milk.

Using incorrect A.I. techniques can lower the overall success rate of the A.I. breeding program. Most producers learned correct semen handling techniques and insemination procedures at one time; unfortunately, many have developed bad habits that have lowered their success rates. This publication reviews proper procedures that should help eliminate some of those common mistakes.

Keep semen tanks in a secure, clean, dry place away from corrosive chemicals. Your tank’s location should allow for easy moving for filling with liquid nitrogen. Store tanks in a visible place, and frequently monitor the nitrogen level. Only store about a six-month supply of semen at a time. Make sure your investment is insured and secure.

Always check the semen inventory list before removing semen from a tank to make sure the correct canister is used each time. Do not lift semen above the frost line in the neck of the nitrogen tank. Exposure to dangerous temperatures in the upper half of the neck in the area beyond the frost line will lower subsequent fertility.

Store insemination equipment in a clean plastic or stainless steel box. Keep this box closed when it is not being used. Clean all equipment before returning it to the box. Always maintain sterility of the plastic sheaths used to cover the straw gun.

Identify and restrain the cow or cows to be bred before thawing the semen. Be sure that cows being inseminated are in heat or at a proper interval after being synchronized. Use the a.m. / p.m. rule or breed at a specific recommended time after hormone treatment.

Wear safety goggles for eye protection when handling semen. When preparing the A.I. gun, quickly remove the straw of semen from the goblet with plastic tweezers – not your fingertips. This helps to keep the straws in the goblet below the frost line and avoids warming the straw too quickly. It is generally recommended that only one straw be thawed at a time. If more than one straw is thawed, they should be agitated to prevent the possibility of freezing together during thawing. If synchronizing and breeding groups of animals, you can thaw several straws together as long as you use them within 15 minutes.

Shake the straw after removing it from the tank to eliminate any drops of nitrogen at the end of the cotton plug. This will prevent the plug bursting off when it is put in the water bath. If you have a large group of animals to inseminate, use semen more promptly by having one person thawing and loading while another breeds the animals.

If you have a source of warm water, a 1-pint, wide-mouth thermos and a dial thermometer work well for thawing straws. Thaw semen in 95 degree F water for 45 seconds. Electronic thaw devices are handy, especially DC versions that can be used with vehicles. Maintain accuracy by regularly checking temperatures and calibrating your thawing thermometer.

After the straw thaws, dry it off with a clean towel and check the information printed on the outside to verify the bull’s identity. Record the bull’s number next to the cow’s number.

Maintain an accurate semen inventory. This can be easily done using PCDart or other dairy computer software programs, and will help minimize excessive searching and canister movement.

Use semen within 15 minutes of thawing. Watch the time carefully, especially when thawing multiple straws. In cold weather, warm the gun by rubbing it with your hands. Place the end with the cotton plug in the gun. Cut the sealed end at a 90-degree angle about ¼ inch from the lab seal. If the straw is not cut squarely, the plastic sheath may not seal tightly against the straw. Some semen will then back flow between the sheath and the straw rather than going inside the cow.

A ½ cc straw contains about 10 drops of diluted semen, so each drop lost equals 10 percent of the total contents and sperm numbers. A ¼ cc straw only has 5 drops. Every drop counts.

Place a sterile plastic sheath over the gun and seal it. Wrap the end in a paper towel to prevent exposure to the sun and to maintain sanitation. Sheath protectors can also be useful. Place the end of the gun in your shirt or pants pocket to maintain temperature on the way to the cow. During hot weather, do not place the insemination gun in direct sunlight or on hot surfaces. This will kill sperm cells.

After loading the gun, clean the region of the vulva to prevent contaminating the vagina and uterus. If you are not completely sure the animal is in heat, pick up the cervix and uterus and see if you get a clear mucous discharge from the vulva. If the mucus is present, it is a good sign that she is in heat.

Insert the gun into the cow upward at a 30-degree angle to avoid entering the bladder. Remember: Inseminating a cow does not require much force or pressure. Do not force the gun. Try to move the cervix around and bring it to the gun. Take your time, relax and concentrate on technique. If the cervix is over the rim of the pelvis, pull it back toward you and guide the cervix to the gun. If the gun is getting caught in folds of the vagina, try stretching the cervix away from you to free the gun and allow easier passage to the cervix.

Deposit semen in the body of the uterus. This area is less than 1 inch long and is about the size of a dime. It is located immediately in front of the cervix. A common mistake is to deposit the semen several inches into the right uterine horn.

Feel the end of the gun with your finger when you are just outside the cervix. Be sure the gun is passing through the cervix and that you are not just stretching the vagina. When the tip of the insemination gun passes through the front ring of the cervix, it is in the uterine body. Check the location by placing your index finger in front of the cervix. You should just be able to feel the tip of the gun. After you feel the tip of the gun, lift your index finger and slowly deposit the semen over a five-second period. Be sure that your fingers are not misdirecting the flow of semen or blocking a uterine horn. Reposition the gun each time the animal moves.

If the cervical mucus of a previously bred cow feels thick and sticky, the cow may be pregnant. On repeat services, it is best to deposit the semen just past the halfway point of the cervix. Be careful because you can inadvertently cause abortion.

Certain problems can occur. If you find blood on your glove, be gentler. Concentrate on placement. Practice proper sanitation procedures. While some cows are more difficult to inseminate, be patient and don’t give up.

Several years ago, researchers at the Pennsylvania State University developed radiography techniques to clearly evaluate insemination accuracy. These techniques overcome some of the limitations of the earlier dye techniques used to evaluate placement.

The normal ratio of ovulation or release of eggs is approximately 40 percent from the left ovary and 60 percent from the right ovary. Because migration of embryos is rare, the pregnancy ratio should be the same: 40 percent left uterine horn and 60 percent right uterine horn. This is an easy way to have your veterinarian check on the job you are doing with correct semen placement. Data on 100 or more pregnancies are required for a proper evaluation.

Practice good insemination techniques. You may improve your herd’s conception rate. Retraining may be necessary to master the expertise required for proper gun tip placement and insemination. Your cows can’t make up for your mistakes in improper semen handling and placement.

When Is the Correct Time to Breed?

It has been thought for some time that optimum conception is achieved if an animal is bred 14 hours after onset of heat. With proper heat detection, acceptable results can be obtained with the a.m. / p.m. rule.

However, recent evidence shows that animals bred once a day in the morning will produce comparable results to the traditional a.m. / p.m. ruling. This is especially useful when artificially breeding heifers that are generally not located near the milk parlor. Breeding once daily in the morning is preferred over breeding in the afternoon, usually because higher proportions of animals show first signs of estrus late in the afternoon or during the night.

Research from Virginia Tech shows that the highest pregnancy rates occur when animals are bred five to 12 hours after the first signs of estrus, which is defined as the “red zone.” If you breed at 12-hour intervals (for example, 6 a.m. and 6 p.m.), you will always hit the red zone. However, if you breed once a day, you are only in the red zone half the time (even though once a day breeding has been shown to be effective).

Producers trying to get an edge on optimum fertility need to make the most of their opportunities. If you consider five to 12 hours after the first signs of estrus as the red zone, or the most optimal window to breed, look to see how many times you breed during the correct period. Of course, accurate detection of early signs of estrus is critical to success.

Once-a-day artificial breeding done in the morning can be used effectively. Optimize heat detection and conception rate management techniques. This does not mean once-a-day heat detection. Heats must still be detected two to three times a day for more than 15 minutes per observation. Moving animals prior to observation helps. Animals are more active on dirt than concrete. Feeding and milking times are not the best times to watch animals for heat. Use prostaglandins to bring groups of animals in heat together and increase heat activity.

Before you give once-a-day breeding a try, look at your conception rate, average days to first service, and percent heats observed on DHIA, and make sure you do not need to improve in those areas first. Of course, if “it isn’t broke,” you may not want to fix it. If the a.m. / p.m. rule is working for you, continue using it to breed animals. Use once-a-days when it helps your schedule.

The following checklists are designed to help you self-evaluate your semen tank maintenance and semen handling insemination techniques.