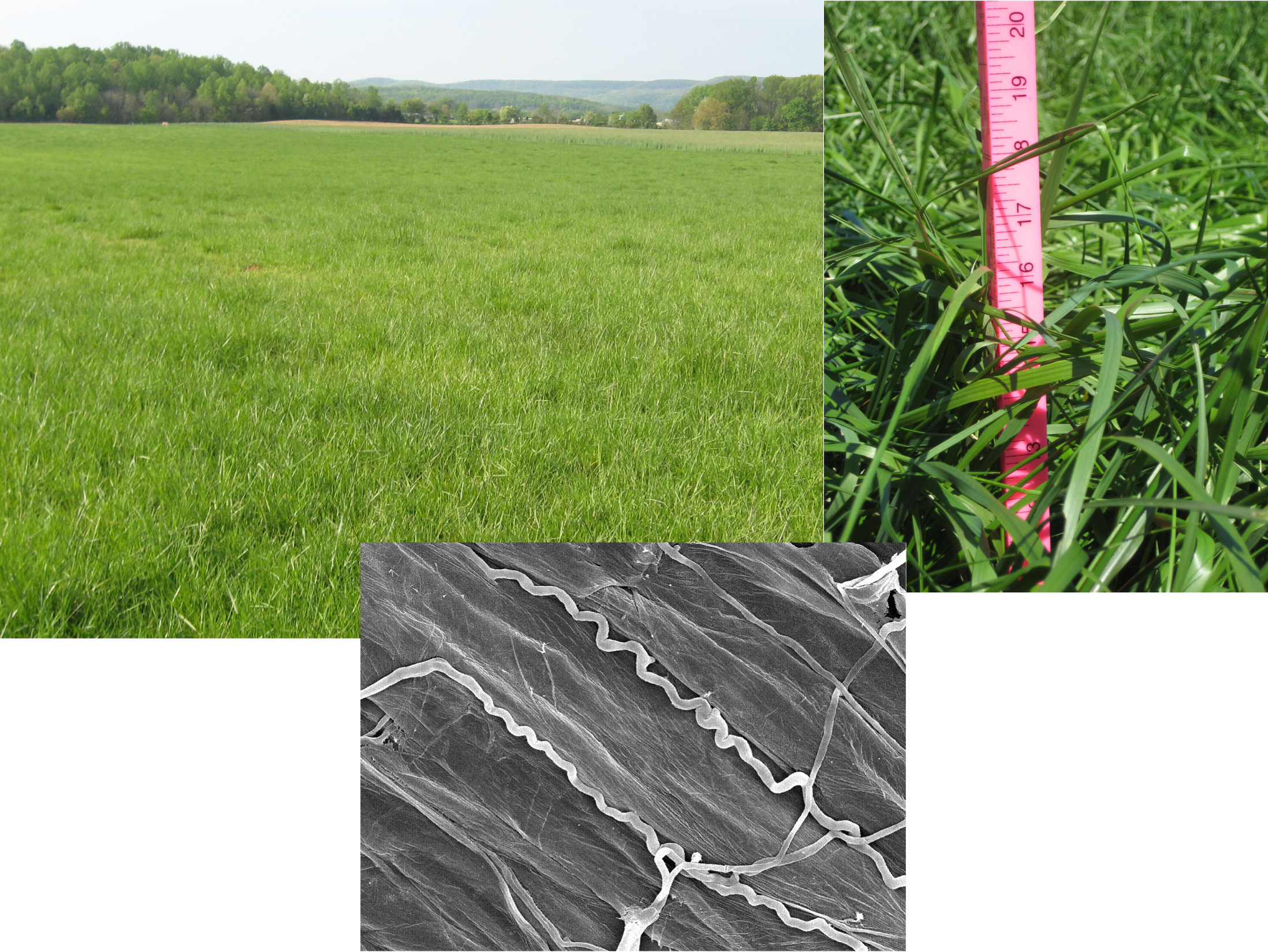 Tall fescue (Schedonorus phoenix (Scop.) Holub) is a cool season perennial grass that fills a critical forage production gap in the Southeast and is the predominant forage crop in much of the U.S. In fact, this species is the most widely used grass in improved U.S. pastures, occupying more than 36 million acres. Its popularity is related to establishment ease, drought tolerance, excellent grazing persistence, and a long grazing season.

Some of these desirable attributes are due to the presence of a fungus (Neotyphodium coenophialum) that lives inside the plant (endophyte). This fungus is transmitted from one generation to the next in the seed. It is not transmitted through pollen or from plant to plant.

Many pasture and hay acres have been planted to novel endophyte tall fescues since their release in 2000. For the first several years, only one product containing a novel endophyte was available in Georgia: MaxQ™.

MaxQ™ tall fescue was jointly developed by Dr. Joe Bouton at the University of Georgia and Dr. Gary Latch at Ag-Research Limited of New Zealand. Many naturally occurring endophyte strains had been discovered in tall fescue in the 1980s and 90s – some of which did not produce toxic ergot alkaloids. Drs. Bouton and Latch inserted these novel endophytes into “Jesup” and “GA 5,” tall fescue cultivars that were developed in Georgia (Figure 1). This resulted in two novel endophyte-containing tall fescue varieties that produced no toxic alkaloids but retained all of the positive agronomic features (excellent persistence, improved vigor, drought tolerance, etc.) of tall fescue varieties infected with the wild-type endophyte.

Because of the potential for stand losses, many producers choose to plant more “dependable” toxic tall fescue and tolerate economic losses associated with the toxins. Novel endophyte tall fescue must persist substantially better than endophyte-free tall fescue to justify the higher costs of seed and renovating existing tall fescue stands.

Before the release of the MaxQ™ tall fescue products, tests of novel endophyte tall fescue persistence were performed near Eatonton and Calhoun, Ga. One test compared the stand persistence of novel endophyte (“Jesup MaxQ™”), endophyte-free, and toxic tall fescue planted into a bermudagrass sod near Eatonton, Ga., and subjected to severe grazing conditions (Figure 2). These plots were established on droughty soils and grazed closely (under continuous stocking) during two successive summers to accelerate stand decline and evaluate endophyte effects on plant persistence.

Because of the grazing pressure severity and the bermudagrass competition present in these pastures, the stand ratings for all of the entries, including toxic tall fescue, declined. Nevertheless, the novel endophyte tall fescue persisted as well as its toxic endophyte-infected cohort and both were more persistent than the endophyte-free plantings. The novel endophyte tall fescue maintained stands equal to toxic tall fescue over a four-year period. Similar results were also obtained in grazing trials near Calhoun, Ga.

How do Animals Perform on Novel Endophyte-Infected Tall Fescue?

Most cattle operations in the Southeast are cow-calf producers. To justify higher seed costs and the cost of renovating existing tall fescue stands, the novel endophyte tall fescue must substantially increase the weaning weight of calves and/or the pregnancy/calving rate of the cows. Cow-calf performance data on novel tall fescue remains limited; however, initial results appear promising.

Stocker cattle performance has been examined for several years at the Central Georgia Research and Education Center near Eatonton, Ga. (Table 2). Similar studies throughout the Southeast have shown similar results, indicating that stocker gains are substantially higher for calves on novel endophyte tall fescue pastures than for those on toxic endophyte-infected tall fescue pastures. Many of these studies also indicate the stockers on novel endophyte tall fescue pastures have smoother hair coats and lower body temperatures, and spend more time grazing and less time standing in the shade or in pools of water (Figure 4).

Following three of these grazing studies in Georgia, the stocker cattle were finished on high-concentrate diets and their feedlot performance was tracked. No difference in animal performance, feed efficiency, or most carcass quality measurements were found in calves that had grazed novel endophyte, endophyte-free, or toxic endophyte tall fescue. However, because of improved stocker performance, the cattle that grazed endophyte-free and novel endophyte tall fescue entered the feedlot heavier and reached targeted harvest weights sooner (Figure 5). While there appeared to be no feedlot performance depression from fescue toxicosis, heavier weights going into the feedlot will either (1) increase finished weights or (2) decrease time-on-feed, both of which translate into more profitable beef production.

Completely renovating toxic endophyte-infected tall fescue pastures to establish a novel endophyte tall fescue variety is a major operation. The renovated pasture will be out of production for several months. Make plans to supply extra feed or reduce animal numbers during this period. There are four steps in this renovation program: (1) prevent seedhead production in the existing toxic endophyte-infected stand, (2) destroy the existing stand, (3) seed the new variety, and (4) manage the new planting.

Mow stands when seedheads begin to develop but before they fully emerge. Two such mowings prior to viable seed production are normally required to prevent seed formation. While heavy grazing may prevent some seedhead production or merely delay seedhead emergence, mowing will almost certainly be required.

There are two methods for destroying an existing stand of toxic tall fescue. The first method, generally referred to as the “spray-smother-spray” method, involves preventing seedhead formation as described above, spraying the existing stand with a moderate to heavy rate of glyphosate (commonly known by the trade names Roundup, Glyphomax, Touchdown, etc.), growing a smother crop (usually a warm season annual grass, such as pearl millet) during the summer, and then spraying surviving tall fescue plants and weeds again in the fall with a moderate to heavy rate of glyphosate before planting the new stand. Unfortunately, this method is very expensive and more problematic for most small producers than the “spray-spray-plant” method.

The “spray-spray-plant” method was developed by researchers at UGA. Their research showed that spring seedhead suppression and applying glyphosate (Roundup) in late summer and again four to six weeks later (followed by planting within one day of the second herbicide application) will successfully kill the existing fescue. The timing of this application protocol is critical, as sufficient regrowth by the survivors of the first application is needed to get a complete kill.

Destroying the stand with an herbicide using either of these two methods will be faster, cheaper, and much more effective than multiple tillage operations. Plowing alone will not sufficiently kill the existing stand and is not recommended. However, there may be some cases where preparing a tilled seedbed is desirable. In this case, the same protocol of two herbicide applications (regardless of method) is recommended prior to seedbed preparation.

Planting with a no-till drill should follow immediately (within one day) after the second glyphosate application. Killing fescue pastures with an herbicide and sod-seeding into the killed sod is advantageous for pastures with severe slopes. Plantings can also be made into a firm, prepared seedbed. In the Piedmont region, successful plantings can be made between mid-September and late October. Plantings in the Limestone Valley/Mountains region should occur between early September and early October. Spring seedings are generally not successful and are not recommended. Regardless of region, a planting rate of 15 to 20 pounds per acre is required for successful stand establishment.

Drought and insects frequently cause problems with fall seedings. Dry weather can reduce germination and delay seed emergence. Stands that are not well-established by December can winter-kill. Insects (grasshoppers and pygmy mole crickets) that inhabit the sod can damage new seedlings.

Like all tall fescue plantings, new plantings need special treatment. Do not cut or graze new plantings until the plants have grown at least 6 inches. Even then, only a light grazing is recommended to avoid stand damage. A light mowing can help control weeds and encourage the tall fescue to grow (i.e., tiller) and thicken-in; however, take care not to cut tall fescue below a height of 6 inches in the spring following establishment.

An early hay cutting (before May) should not be taken from new tall fescue seedings. If the novel endophyte tall fescue has been clipped to control weeds in early spring, a late hay cutting (after mid-May) can be successfully made if the planting resulted in an acceptable stand. The tall fescue stand should be managed to allow light to reach the base of the plants, which will encourage tillering; however, do not defoliate the plants too frequently or too severely.

Faculty
Dennis Hancock Professor and Extension Agronomist for Forage Crops (Pasture, Hay, and Silage), Crop & Soil Sciences
Have a question? Contact your local UGA Extension office to find out how our team of county agents can assist you.
Set County Preference
Related Publications