Not too long ago, every farmhouse had boxes, gourds or other housing to attract purple martins, and Native Americans hung empty gourds for the birds. Martin houses are not as common today as they once were, but with increasing interest in our environment and nonchemical pest control, the martin is regaining popularity. According to the Purple Martin Conservation Association, more than one million people have martin houses.

A Few Facts about Martins

The purple martin (Progne subis) is not a year-round bird in Georgia; it winters in South America – usually Brazil. Generally, it arrives in southern Georgia in early February, reaches northern Georgia by mid-February, and then leaves during the fall.

Old martins tend to return to their old nesting areas; young birds seek new ones. This means that once a house is used, it probably will continue to be used, and new houses will eventually be occupied as first-year martins look for places to nest. Contrary to country legend, early arriving "scouts" are not checking to see if the environment is safe for returning birds. They are actually the older, experienced martins returning to begin nesting. Younger birds will soon follow. Another legend claims that if birds fail to return then something happened on the wintering grounds. In reality, the backyard "flock" rarely migrates or winters as a group. If martins fail to return to your yard, probably the site is no longer suitable.

Traditionally, martins nested in abandoned woodpecker holes. This is still common in the Rockies, but in the East, martins rely heavily on human-supplied housing.

Martins are monogamous for the breeding season. They make their nests from twigs, weeds, dead leaves, coarse grasses and similar materials. The female lays three to eight white eggs and incubates them about 15 to 18 days. Both parents feed and care for the young. Young birds stay in the nest three to four weeks. Even after they leave the nest, young martins often return to the area for a week to 10 days before their final departure.

Purple martins feed and drink only while they are in flight. A martin?s diet is diverse. They will eat dragonflies, midges, mayflies, stinkbugs, leafhoppers, Japanese beetles, June bugs, butterflies, moths, grasshoppers, cicadas, wasps, flying ants and more. They are not, however, heavy consumers of mosquitoes (you?ll have to rely on bats for that task). Over a seven-year study at the Purple Martin Conservation Association headquarters in Pennsylvania, researchers did not find a single mosquito in the martins? diet. 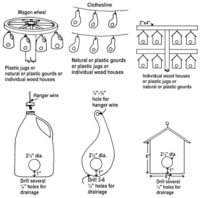 Martins will nest in a variety of houses. In the past, it was common to see a number of gourds hanging from a pole with crossarms or from a wagon wheel mounted on a post.

Unfortunately, natural gourds are not as common as they once were, and gourd houses are seldom seen today. However, you can buy plastic gourds and duplicate the older-style houses. Another possibility is to cluster jugs or man-made houses on wagon wheels or poles with crossarms.

Perhaps the most common accommodation for martins is the “apartment house.” You can buy wooden or aluminum houses at hardware, feed and seed stores, or you can make your own.

To make your own "high rise," start with one layer, then add others as your colony grows. Use the lightest material you can to build your house because you'll want to put it up and take it down for cleaning and storing.

Make compartments approximately 6 inches cubed. Generally, it is best not to put more than 24 nesting compartments in a single apartment house. Place martin apartments about 10-20 feet above ground.

Entry holes can vary between 1 3/4 inches to 2 1/4 inches in diameter, although 2 1/8 inches is recommended. Place the bottom of the entrance hole 1 inch above the bottom of the nesting compartment. Except for the lower layer, the center nesting compartment does not have a floor. This gives a central air passage for ventilation. According to the Purple Martin Conservation website, the entrance hole must be 1/2 inch from the porch and exactly 1 3/16 inches high to exclude starlings and screech owls. Cut with a jig saw and file or sand to the final dimensions.

Paint the house inside and out with white paint. White outside helps keep the house cool. White inside helps prevent starlings from using the house. Starlings prefer a dark cavity; martins will use a light one. Do not use treated lumber or lead-based paint. Plywood and latex paint work well.

Often, published plans and premade houses will have incorrect entrance holes. If starlings and house sparrows do use your martin houses, take the houses down and destroy the nests. Should cats or other climbing predators become a problem, put a predator guard on the post or lubricate the pole with Vaseline - do not use grease.

Where to Put Martin Houses

In general, martins prefer houses in relatively open areas. If possible, do not put a martin house closer than 40 feet from a tree and 30 feet from buildings. The end of a boat dock is a good place to set up a martin apartment. Remember that martins are colonial birds and like to nest together. Widely scattered houses built for solitary pairs of birds are usually unsuccessful.

Because martins love to socialize on telephone and electric wires, put their houses near utility lines if possible. Putting houses near open water is often helpful too.

Because martins feed almost exclusively on flying insects, open fields are a powerful attraction. After all, insects are easier to catch in a field than in trees. Keep martin houses away from bee yards; martins eat honeybees.

How to Put Up Martin Houses

Before you start to put martin houses up, place a pinch of sulfur dust in each nesting compartment. This helps control mites.

Put houses on poles 15 to 30 feet tall, unless the area has heavy vegetation. A good rule of thumb is: the lower the vegetation, the lower the pole can be. If possible, make the pole so you can take the house down for cleaning in fall and storage in winter.

If you decide to permanently install your martin houses, be sure you have some way to clean out the nest compartments. For example, put the house where you can climb up on a tall ladder and use a wire hook to pull out old nest material. Also, during winter, put plugs in the entry holes to keep out starlings and sparrows.

The Purple Martin Society, NA
www.purplemartins.com/
Note: there is only a slight difference in web address between this site and the one above.

Status and Revision History
Published on Sep 15, 2009
Published with Minor Revisions on Jun 26, 2012