Blossom-End Rot and Calcium Nutrition of Pepper and Tomato

Had the ancient Roman Empire not developed concrete and cement, the domed buildings, arched bridges and aqueducts we see today would not still give testimony to the Romans’ ingenuity or to the durability of a simple mineral: limestone. Although calcium (Ca) is well known as the main ingredient in limestone, it has also been used for building strong plant cell walls since long before man discovered its uses for lasting architecture.

Calcium serves several functions in plants, including cation-anion balance, transport processes of cell membranes and assisting with extension of primary root systems. For vegetable producers, calcium’s most important function during the crop fruiting stage is its role in cell wall/cell membrane stability. If Ca is deficient in developing fruits, an irreversible condition known as blossom-end rot (BER) will develop. Blossom-end rot occurs when cell wall calcium “concrete” is deficient during early fruit development, and results in cell wall membrane collapse and the appearance of dark, sunken pits at the blossom end of fruit. Many farmers and gardeners may treat this condition as a fruit disease; however, nutrient and water management regimes are the culprit. The purpose of this publication is to introduce the problem of BER and provide a guide to effectively diagnose and treat this problem.

Although no data exists to quantify how much annual economic impact blossom-end rot has on Georgia’s bell pepper and tomato industries, it is safe to say that significant loss of fruit occurs during the spring crop season, especially during hot, dry years. What is also unknown in the vegetable research realm is if a single cause leads to BER, or if (as past research indicates) multiple factors contribute to its occurrence. One fact that everyone can agree on is that when BER is first noticed in the field, prompt action is essential to halt further incidence. Four simple questions in the field will lead to a timely diagnosis and treatment of the problem:

Question 1. Is the problem disease- or nutrient-related? 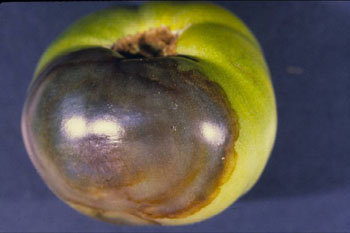 There are only a few common fruit disorders resembling BER that can lead to an incorrect diagnosis of the problem. Fruit anthracnose may occur on pepper and tomato fruit, but only on the side walls. The same is true for sunscald, which appears on pepper fruit sidewalls and is pale in color. Buckeye rot, caused by Phytophthora, and cucumber mosaic virus (CMV) also resemble BER, but these disorders occur more infrequently than anthracnose. Blossom-end rot is uniformly dark brown and black in color, and appears ONLY on either the lower fruit sidewall or the blossom end of smaller and developing fruit. Often, symptoms will occur as far as 1/3 to halfway up the fruit, but will NEVER start at the stem (calyx) end. Also, BER symptoms will tend to appear during the first fruit set as, early on, growers are unaware of the problem until it’s too late. If these symptoms all correspond, the fruit has BER.

Recommendation: If these conditions all hold true, proceed to Question #2.

Examine liming and gypsum application records, along with the current season’s pre-plant soil test reports. If pre-plant soil test Ca levels are in the medium (801 to 1,200 lb Ca/acre) or high range (>1,200 lb Ca/acre), it is assumed that soil Ca levels are sufficient for crop growth. This is even more true for soil pH ≥ 6.0, with supplemental gypsum or lime being applied pre-plant at levels of 500 to 1,000 lb/acre or higher.

Recommendation: If these conditions exist, proceed to Question #3.

Recommendation: No specific recommendations exist for alleviating a low soil Ca level after planting. However, calcium nitrate (CaNO3) is a water soluble source of Ca and nitrogen (N) and is routinely injected in drip irrigation systems. Some research has begun on a relatively new material, calcium thiosulfate (CaS2O3), which also is available for drip injection systems. Injections of soluble Ca sources should begin at bloom and proceed until fruit is approximately golf ball-sized. This is believed to be the critical time when calcium must move into developing fruit to avoid onset of BER. 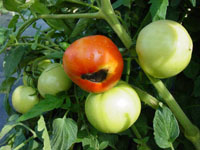 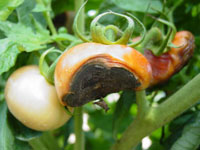 Figure 3. Severe BER symptoms progress from the blossom to the stem (calyx) end of the fruit.
(Photo by Joshua Mayfield)

Although some people believe foliar sprays can correct Ca deficiency in developing fruits, research is very inconclusive on this issue. What is well known is that Ca only moves in the plant via the xylem and moves with the transpirational water flow from the roots, up the plant and into developing leaves. Calcium has no ability to flow from the leaves via the phloem to the developing fruit. In addition, once fruit has grown to golf ball size, the waxy outer layer has developed and is believed to be quite impermeable to water. Therefore, it is recommended that all Ca supplied to fruiting vegetables be applied via the irrigation water so as to maximize uptake by roots.

Recommendation: If liquid fertilizers are already being used, proceed to Question #3.

Research has shown that Ca in soil solution competes with potassium (K), magnesium (Mg) and ammonium-nitrogen (NH4-N) for uptake in the plant. Although no established guidelines exist to determine what proportions of these nutrients in soil or plant tissue are appropriate, it is known that excessive shoot growth resulting from overfertilization of N and K during early bloom and fruiting stages is a major contributor to BER in developing fruit. Since Ca moves with the transpirational water flow, water is going to go to areas of new shoot growth that have the greatest transpirational demand. Calcium will therefore be deposited in the new shoot and leaf tissues that result from excess fertilization, and little will end up in developing fruit where it is needed most. At early bloom stage for bell pepper and tomato, leaf N and K analysis should both be within 4.0 to 6.0 percent. Levels higher than these may indicate excess fertilizer.

Recommendation: Cut rates of N and K if excessive top growth is occurring. Switch N source to CaNO3 or begin injections of CaS2O3 at bloom stage. If these steps are already being implemented, proceed to Question #4. 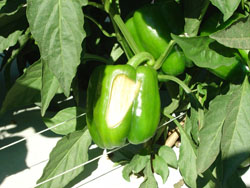 Figure 4. Sunscald (or sunburn) on pepper with BER-like symptoms.
(Photo by Joshua Mayfield) 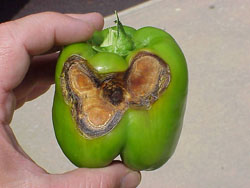 Some people believe the relative humidity and transpirational rates of tomato and pepper during the spring season are the real keys to understanding what factors trigger BER in fruiting vegetables. Fluctuations of soil moisture, as happens during a week of off-and-on rain, may trigger BER due to irregular transpiration rates, affecting the quantities and timing of water and Ca moving up the xylem. Conversely, during hot, dry weather when transpiration is occurring at a much faster rate, developing vegetative parts such as growing leaves and stems become greater sinks for Ca than developing fruits. Lastly, as the waxy outer layer of a tomato or pepper fruit develops, the fruit’s transpiration rate decreases because water movement through the epidermal cells and evaporation into the outside air become difficult. The resulting decrease of Ca that flows into those young fruit tissues via xylem transport is believed to contribute to the onset of BER.

Recommendation: Some research findings have quantified a decrease of BER incidence with increased irrigation rates. However, no recommendations exist for determining the critical moisture levels required in soils to minimize this disorder, nor is information available regarding the severity of moisture deficits triggering BER. 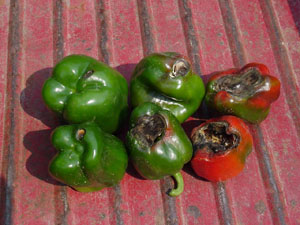 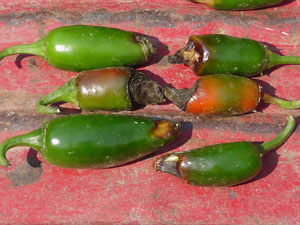 For now, the “feel” method is still the most tried and true method of assessing soil moisture in the field. Along the row and out to the shoulders of the bed, the soil should be moist enough to form a ball in your hand and not break apart. The optimal time to increase irrigation and ensure that adequate moisture is being supplied is from first bloom set through fruit development. If BER initiates in fruit, it is believed to be during this early stage of development.

Certain occasions exist where farmers run irrigation pumps “round the clock” and soil still will not form and hold a good ball shape. This may indicate that irrigation demand during the fruiting period is greater than that for which the pumping system was designed.

It is believed that both nutritional and environmental factors need to be considered when diagnosing BER and recommending treatments. First, a correct diagnosis must be made to avoid recommending costly fungicide sprays when none are needed. Next, a careful examination of a grower’s soil test and leaf analysis records, in addition to their irrigation management practices, will help determine if additional Ca alone or in combination with increased irrigation scheduling will solve the problem. Equipped with a basic knowledge of plant growth, fruit development and Ca movement in soils and plant xylem tissue, growers will have the tools necessary for diagnosing and correcting the adverse effects of blossom-end rot.

Wui, M. & Takano, T. (1995). Effect of calyx removal and air flow or bagging of the fruits during the fruiting stage on the incidence of blossom-end rot in tomatoes, Lycopersicon esculentum L. Env. Control in Biology, 33(1), 15–21.