Plants develop seeds through a process called pollination. Pollination is the transfer of pollen from the stamen (male flower part) to the pistil (female flower part). Since both a stamen and a pistil are necessary for seed formation, they are called essential organs. Most flowers contain two other parts, the sepals and petals, which may help attract insect pollinators. A complete flower contains all four parts. If only one of the essential organs is present in a flower, it is called an incomplete flower. 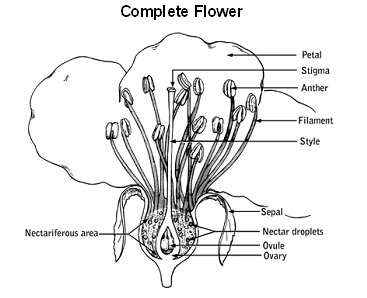 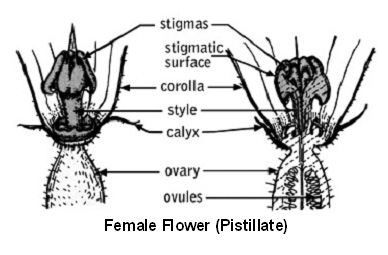 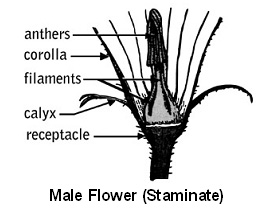 Vegetables in Group 1 have flowers that can receive only their own pollen. They are called self-pollinizers.

Vegetables in Group 2 form seed only with pollen from an unrelated plant.

Vegetables in Group 4 have both male and female plants. Seeds are formed only when male plants furnish pollen.

Pollination may occur between vegetable cultivars, creating new cultivar varieties. For example, plants in the Cucurbitaceae or gourd family belong to four species among which crosses may occur. The success of such crossing depends on the species to which a variety belongs. Plants belonging to the Cucurbitaceae family produce separate male and female blooms on the same plant. Insects are usually required to cross-pollinate blooms. 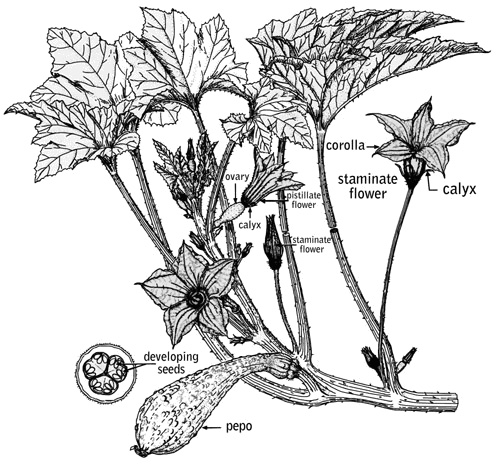 Cucurbit plants, for example, have separate male (staminate) and female (pistillate) flowers. Male flowers generally appear on the plants several days before female flowers. The female flower is easily recognized by the presence of a miniature fruit below the flower petals. (Fig.1) Pollen from the male flower must be transferred to the female flower for pollination and subsequent fruit development to occur. 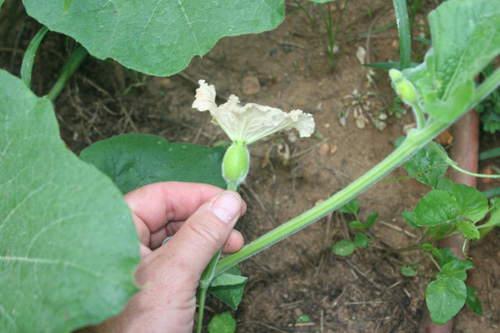 Figure 1: Female flowers on cucurbit plants have a miniature fruit below the petals.

Many insects visit flowers to collect pollen and nectar as food. As they forage, these insects spread pollen grains among flowers, accomplishing pollination. Many flowers offer sugary liquid nectar as an added enticement for these pollinating insects. Among insect pollinators, bees are especially efficient because they eat pollen and nectar exclusively, visit many flowers of the same species during a single trip and have hairy bodies that easily pick up pollen grains.

Cucurbit flowers open shortly after sunrise and remain open until late afternoon or early evening, so each flower is open for only a few hours. The honeybee is the most common and effective cucurbit pollinator. Honeybee activity closely coincides with the period when the flower is open. Honeybees begin to visit flowers an hour or two after sunrise and continue to visit until mid-afternoon. If temperatures are very warm, bee activity may decline about noon. Avoid spraying pesticides when bees are active.

Research on watermelon in Florida showed that the number of bee visits was more important than the length of time that each bee stayed on the flower. Well-shaped, fully-expanded fruit developed after eight bee visits to a female flower. Fruit set was significantly reduced when bees only visited two to four times. Misshaped or undersized fruit could be the result of poor or incomplete pollination. (Fig.2)

Figure 2: Misshaped or small fruit may result from poor or incomplete pollination.

The formation of seed in more complex plants depends on sexual reproduction in the flower. This process can be quite complex and is of fundamental interest to plant breeders. It is important that plantings be sufficiently separated when crossings are not wanted. Those who grow vegetable plants for seed production should consult the Georgia Crop Improvement Association for isolation distance requirements for various crops.

Home gardeners who want to save seed from vegetable plants can expect Group 1 to contain less than five percent mixed seed. When seeds are saved from Groups 2, 3 and 4 and more than one variety of the same species is grown in the garden, gardeners should use special care to prevent crossing.

Some pollination exceptions exist within each group. If you have specific questions about a certain vegetable, contact your county extension office.