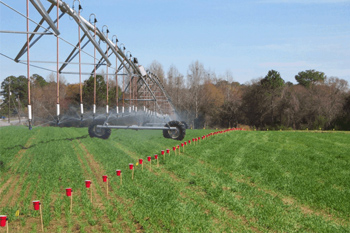 With rising fuel prices it is increasingly important that irrigation systems apply water uniformly in order to achieve maximum benefit from the water applied. When irrigation systems are used to apply fertilizers and pesticides, application uniformity becomes even more critical. Consequently, it is important for center pivot owners and operators to periodically check the uniformity of their systems.

The uniformity of water application under a center pivot is determined by setting out cans or rain gauges along the length of the pivot, bringing the irrigation system up to proper operating pressure, and letting the system pass over them (Figure 1). Record the distance from the center of the pivot and the amount of water collected for each can or gauge. From this information, a coefficient of uniformity can be calculated. The coefficient of uniformity is usually expressed as a percentage. Interpretation of these values is presented later.

A number of methods/formulas can be used for determining application uniformity. Certain methods are preferred for different types of irrigation systems. For a center pivot irrigation system, the easiest and most widely used method/formula is the Christiansen Uniformity coefficient. The mathematical equation for the Christiansen Uniformity coefficient is:

A second method/formula specifically for center pivots is the Heerman and Hein Uniformity coefficient. It is the method recommended by the American Society of Agricultural and Biological Engineers (ANSI/ASAE S436.1). It is very mathematically involved and requires the use of a computer in most cases. Computers are, however, becoming more commonplace, and software (both free and for sale) is available that can do the lengthy and involved calculations for you. You can even use the readily available spreadsheet programs on most home computers to develop your own data analysis.

The University of Georgia Department of Biological and Agricultural Engineering has a free software program available called ISAAC (Irrigation System Analysis and Computation). You can download a copy at: www.cpes.peachnet.edu/kharrison/. Then click on “ISAAC Uniformity Program.” 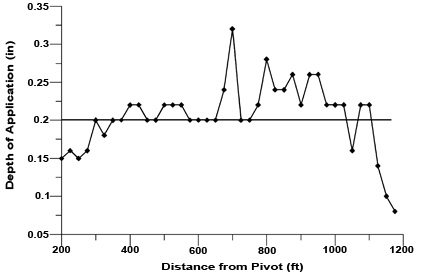 You may decide that the calculations (whether from ISAAC or your own spreadsheet development) are just too cumbersome. If this is the case, a simple plot of the data will reveal the places along the pivot where “high” or “low” application amounts occur. Actual plots of data collected are shown in Figures 2 and 3 to illustrate this point. 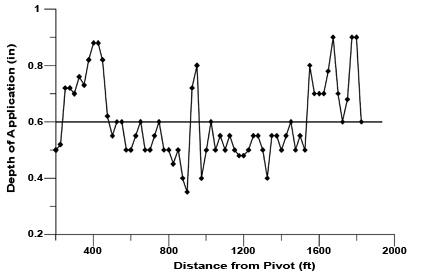 Figure 3 is an example of a system that needs new nozzles or sprinklers to correct the uniformity problem. The “high” and “low” application amounts are at several locations along the system, making individual sprinkler replacement too involved. The calculated uniformity coefficient for this system was 81 percent. The recommendation was made to “renozzle” the system, since any further change in application would probably result in a uniformity coefficient below 80 percent.

Rain gauges, 16-ounce drink cups or other containers of uniform size may be used to perform a uniformity test. If rain gauges are used, the amount collected may be recorded directly in inches. If other containers are used, the volume collected can be deter-mined by pouring the contents into a small graduated cylinder calibrated in milliliters. This volume can then be converted to inches of depth by measuring the inside diameter (in inches) of the top of a round container and calculating a conversion factor as follows:

C.F. is the conversion factor and D is the inside diameter of the catch cup in inches. By dividing the amount of water collected in milliliters by this conversion factor, the depth in inches may be determined.

The basic materials necessary to perform a uniformity test are catch containers, tape measure or roll tape, stopwatch, flags to assist in last tower speed measurement, liquid measuring device (if not using rain gauges), and a worksheet to record the data. Also, the agencies mentioned earlier could have these materials available for loan or they could help you perform the test.

Set out cans or rain gauges in a straight line from the pivot point. This line of gauges should be about 30 to 45 degrees “ahead” of the direction that the pivot will travel so water will not enter the gauges during initial pivot startup. Place the first gauge about 150 to 200 feet from the pivot point. It is not necessary to place gauges any closer to the pivot point than this because the uniformity under the first tower is usually not good, and the area represented is small (less than 3 acres). Place gauges no more than 50 feet apart from this beginning point. It is recommended that the gauge spacing be comparable to the sprinkler spacing on the pivot. A 10- to 30-foot spacing is usually preferred. Placing the gauges closer together provides a more accurate representation of the application uniformity. If the end gun will be operating, extend the placing of cans about 150 feet past the end gun. This will ensure that gauges are located under the full throw of the end gun.

Once the gauges are in place, bring the pivot up to normal operating pressure and then operate (forward or reverse direction) to pass over the gauges completely. The speed of the pivot (percentage timer setting) is not important. Operation at the normal percentage timer setting, however, will tell the operator whether the system is applying the amount of water that is desired. Remember that performing a uniformity test on a hot, dry, windy day may result in evaporation losses as high as 25 percent. If time is critical, the uniformity test may be performed at a higher percentage timer setting. This will allow the pivot to pass over the gauges more quickly. As the pivot is moving, walk the length of the pivot and look for leaks and sprinklers that may not be rotating or operating properly. Make a note of these locations on the back of the data sheet. These notes will help you make recommendations for improvements.