Circular 889-2
View PDF picture_as_pdf
This publication is part of the Wildlife Management series.

Wildlife managers use food plots to increase a property’s value to wildlife. These plantings provide supplemental forage to wildlife during periods when native vegetation is less abundant or lacks nutritional quality. Because deer often prefer fertilized food plot plants to naturally available plants, however, over-browsing can damage food plots before they become sufficiently established. Deer over-browsing reduces overall production of food plots and often leads preferred plants being replaced by less desirable invasive plants. Managers often blame poor seed or soil quality for food plot failures when deer over-browsing during establishment is the real reason for less desirable results. The only way to ensure that vigorous food plots are available to wildlife during critical periods is to prevent deer over-browsing during establishment. This is particularly true when considering summer food plots because many summer annuals become damaged and die when deer browse during early vegetative growth. Therefore, when deer are abundant on a property, managers are wise to protect summer food plots from browsing until they are adequately established to withstand browsing damage.

Repellents are often used to deter deer damage to orchards, gardens, ornamental plants and agronomic crops. Repellents generally rely on fear, pain, taste or conditioned avoidance to discourage deer browsing (Conover, 2002). Odor and/or taste-based repellents may be applied to individual plants (systematic and contact deliveries) or spread throughout an area that contains multiple plants (area delivery). New repellents continue to enter the commercial market, but their efficacy varies depending on several factors including deer density, available food resources and seasonal changes in plant palatability (Trent et al., 2001; Conover, 2002). Milorganite® has been suggested as an area delivery repellent for use in the spring and summer in Georgia to control deer damage to multiple plantings (Kammermeyer et al., 2001).

We tested the efficacy of Milorganite® as an area delivered repellent to temporarily reduce deer damage to soybeans (Glycine max) planted as supplemental summer forage for wildlife. The specific objective of this study was to determine if Milorganite® treatments would provide newly germinated soybean plants with protection from deer browsing until they were sufficiently established to survive damage.

In 1913, the Wisconsin legislature passed an act to create a sewage commission responsible for cleaning up the waterways. During the same year, a chemist in Birmingham, England, conducted the first experiments to focus on purifying wastewater containing biosludge from human sewage. The Milwaukee Sewage Commission adopted this new process for use on December 31, 1919. The world’s first large scale wastewater treatment plant was constructed on Jones Island, near the shore of Lake Michigan.

The purpose of the Jones Island facility was to produce clean water from water containing human sewage. Although they achieved this task, they soon realized the difficulty of disposing of large amounts of biosolids, a product of the water purification process. To help solve the problem of biosolid disposal, the Milwaukee Metropolitan Sewerage District established a fellowship at the University of Wisconsin College of Agriculture to study the value of biosolid sludge as a fertilizer product. Professor O. J. Noer was the primary investigator. After experimenting with field crops and vegetables, Dr. Noer focused on the value of this organic fertilizer to residential lawns. Based on his research, Dr. Noer concluded that processed biosolid sludge was an effective organic, slow release fertilizer that could be safely applied to a variety of plants.

The trade name, Milorganite®, was chosen for the product. The name was derived from MILwaukee ORGAnic NITrogEn. Today, this product is often used for soil amendment purposes rather than a fertilizer because of the low (6-2-0) Nitrogen-Phosphorus-Potassium components. Milorganite® is relatively inexpensive when compared to other commercially available fertilizers and is distributed by fertilizer dealers throughout the United States.

Figure 1. At each of five north Georgia properties, two 0.5-ac food plots (control on left and treatment on right) were established with 15-300 yards of natural vegetation separating the plots.

Our research was conducted on five properties in the Piedmont Physiographic Region of north Georgia. We did not estimate deer population density but believed deer density on each property ranged from 30-50+ deer per square mile. We did not measure composition of native plant communities or abundance of individual plant species but did recognize that differences might have existed. On each property, we selected two 0.2-hectare plots (control/treatment) separated by 15-300 meters of natural vegetation based on various site characteristics (Figure 1). Before planting soybeans, we applied fertilizer and lime to each plot according to the soil test recommendations provided by the University of Georgia Soil Test Laboratory, Athens, Ga.

Each plot was plowed and smoothed before we used a no-till drill to plant 60 pounds/acre of soybean seeds. When soybean plants began to emerge from the seedbed, we used the seed spreader on a tractor to broadcast 240 pounds per acre of Milorganite® to each plot. Once soybean plants were sufficiently emerged (about 1 inch tall) in a plot, we randomly selected 100 plants from each of five rows (500 plants) as a sub-sample to include in bi-weekly monitoring. We monitored the estimated amount of deer browsing damage to the sub-sample of soybean plants at each plot. We observed each of the 500 plants on each plot. If the plant had any evidence of browsing or if the plant was completely gone, we scored it as “browsed.” Otherwise, we scored it as “unbrowsed.” We collected data for up to 37 days after first plant emergence. 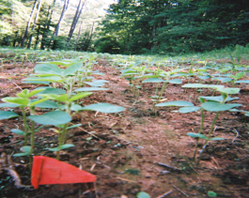 Figure 2a. The undamaged ("unbrowsed") soybean food plot at 9 days after soybean emergence following Milorganite® treatment. Plots a and b were planted on the same day. 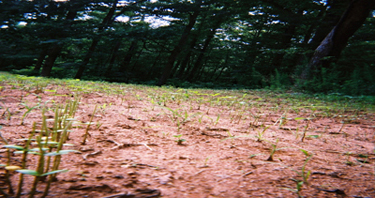 We concluded that Milorganite®, when broadcast over newly emerging soybeans, is an effective temporary deer repellent, which reduces negative effects of deer browsing and benefits wildlife food plot establishment. The repellent does not eliminate deer damage, however, and efficacy varies by location. Although we did not measure environmental differences among locations, we believe weather, deer density and alternative food source availability likely influence location-specific efficacy. Extreme weather conditions coupled with high deer densities and low resource availability may reduce the efficacy of Milorganite® as a repellent. Reduction of deer damage may further increase if Milorganite® is reapplied at day 14, as suggested by figures 3 and 4. Further research involving different application rates will prove useful in determining the deers’ tolerance level to Milorganite®. Our results suggest that landowners, farmers and sportsmen may be able to establish large-seeded legumes like soybeans in a food plot if Milorganite® is applied at planting but before damage begins. Once the plants are established, further treatment with a repellent is not necessary and soybeans are an excellent food for deer.

Figure 3. The mean percentage of soybean plants recorded within each browse-rating category during data collection (treatment sites) through Day 37. Data are composite values from several sites established and observed in the Georgia Piedmont during July-August, 2004.

Figure 4. The mean percentage of soybean plants recorded within each browse-rating category during data collection (control sites) through Day 37. Data are composite values from several sites established and observed in the Georgia Piedmont during July-August, 2004.