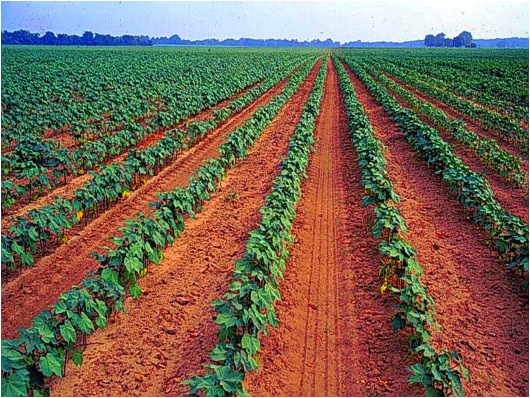 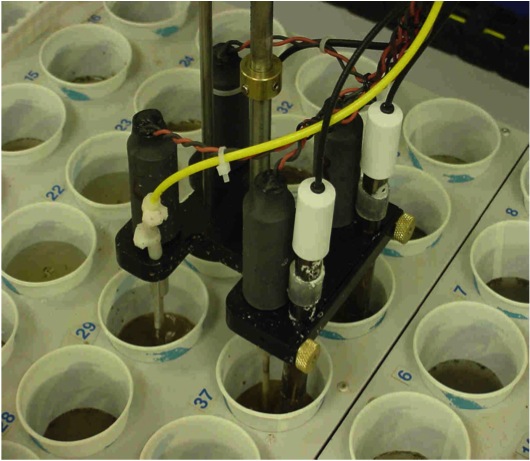 Soil pH is a measure of the relative acidity or alkalinity in soils. It is a fundamental chemical property because it influences the availability of nutrients and the solubility of elements like aluminum and manganese, which are detrimental to crop growth.

The desirable pH range for optimum plant growth varies among crops. While some grow best in the 6.0 to 7.0 range, others grow well under more acidic conditions. Soil pH may be attributed to various factors including mineralogy, climate and management of soils. Although some soils may have the desirable pH for the crop being grown, others require amendments such as lime to increase pH or sulfur to lower pH.

To adjust soil pH to a desired or target pH value, one must not only know the current soil pH but also the buffering ability of the soil to resist change in pH. Most soil testing laboratories make lime recommendations from a calibration based on measured pH before and after the addition of a pH buffer solution. Through research at the University of Georgia, a procedure was developed to directly measure the amount of soil acidity that must be neutralized by lime application. This property is called the soil's lime buffer capacity (LBC) and is described below.

The soil lime buffer capacity (LBC) is a fundamental property of soil that has many useful applications. It is the measure of the amount of soil acidity that must be neutralized to raise soil pH by one unit. In terms of lime, LBC is defined as the weight of pure lime (CaCO3), in milligrams, needed to raise the soil pH of one kilogram of soil by one unit. The pH of a mixture of soil and salt solution is measured before and 30 minutes after adding a single dose of calcium hydroxide. The value of LBC is largely determined by the difference in the two pH readings.

Soil LBC characterizes a soil's buffering ability to resist a pH change. In simple terms, acidic soils with a high LBC would require more lime (greater resistance to pH change) than those with lower LBC. Likewise, more acid-forming amendments like sulfur are required to lower the pH of a soil with high LBC. The relationship is illustrated in the figure below for two soils with a pH of 5 having different LBCs. More lime is required to change the pH of the high LBC soils from 5 to 6 (2,400 lbs/acre) compared to the lime required to change the pH from 5 to 6 in the low LBC soil (1,200 lbs/acre). The LBC varies amongst different soil types because of differences in soil organic matter and clay contents. Soils with more organic matter and clay generally have higher LBC.

The LBC is used to calculate the lime requirement to reach a target pH. In 2004, the UGA Soil Testing laboratory initially adopted the LBC method to determine lime requirement (the procedure was published in the original version of this publication). With that method, the reaction time of 30 min after adding Ca(OH)2 was insufficient to reach equilibrium pH. To account for lack of equilibrium, a coefficient of 0.6 was used in the calculation of LR: 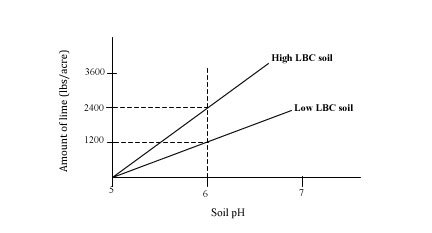 Recognizing that the 30-minute equilibration time was insufficient, the UGA Soil Testing laboratory conducted a follow-up soil-lime incubation study and found that equilibrium was achieved by five days. However, a five-day incubation is impractical for a routine soil testing laboratory where a rapid sample turnaround time is expected. Using data from 30-minute and five-day incubation studies, the UGA Soil Testing laboratory was able to establish relationships between the two incubation periods and calculate LBC at equilibrium. To distinguish one from the other, LBC30 refers to LBC after 30-minute equilibration whereas LBCEq refers to LBC at equilibrium at five days. Analysis of the data confirmed that the LBCEq could be predicted accurately from LBC30 using either equation (a) or (b) below.

The primary purpose of the LBC method is to determine the lime requirement (LR) of a soil to adjust it to the desired pH level. An LR is calculated based on three factors: 1) the soil's initial pH, 2) the desired or target pH and 3) the soil's LBC (in the current method, it is LBCEq). The LR is typically presented as the pounds of lime per acre needed to raise soil pH to the target value and can be calculated as shown below.

The value of LBCEq depends on the soil's LBC30, as shown earlier. Because LBC has units of ppm, "2" is used to convert to lbs/acre. The conversion from ppm to lbs/acre assumes treatment of a 6-inch soil depth. To convert from a 6-inch depth to an 8-inch depth typical for agronomic crops, the factor of 8/6 is used. The LBC considers pure CaCO3 so 1.5 is used to determine an amount of agricultural lime that has lower purity. Considering all the multiplication factors together produces a simplified equation as shown below, which is used by the UGA Soil Testing laboratory.

4. Use of LBC in Evaluating Other Soil Fertility Issues

As the original version of this publication indicated, the primary purpose of the LBC method is to calculate lime recommendation, but it can also be used in adjusting amendments to lower soil pH. Because it measures soil acidity, this parameter can be used to estimate, along with soil test calcium, magnesium and potassium values, soil's estimated cation exchange capacity. Because organic matter and clay contents remain relatively unchanged from year to year in typical agronomic farming operations, LBCEq values will not appreciably change over time. For soils heavily amended with organic materials (horticultural fields, gardens, potting soils, flower beds, etc.), an annual LBC measurement may be needed.