Fireblight is a destructive, highly infectious and widespread disease caused by the bacterium Erwinia amylovora. Fireblight can be a problem in Georgia and is particularly prevalent in some counties. Fire blight attacks blossoms, leaves, shoots, branches, fruits, and roots. In the following paragraphs are some facts and methods to avoid and control the disease. 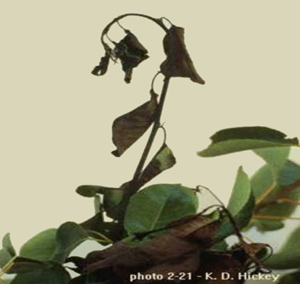 The bark at the base of blighted twigs becomes water soaked, then dark, sunken and dry; cracks may develop at the edge of the sunken area. Young twigs and branches die from the terminal end and appear burned or deep rust colored. Branches may be bent, resembling what is commonly referred to as a “shepherd's crook” (Figure 1). Dead leaves and fruit remain on the branches.

Initially the disease often enters the tree through natural openings, especially flowers and wounds in the spring. Once established in the tree, fireblight quickly invades through the current season's growth into older growth.

Fireblight can be spread from diseased to healthy plants by rain, wind, and pruning tools. The bacterium can survive the winter in sunken cankers on infected branches. In spring, the bacteria ooze out of the cankers and attract bees and other insects. Insects also help spread the disease to healthy plants. The bacteria spread rapidly through the plant tissue in warm temperatures (65 degrees F or higher) and humid weather.

During spring and summer, prune out infected branches 8 inches below the damage. Avoid pruning when the plants are wet. Dip pruning tools in 70 percent isopropyl alcohol (rubbing alcohol) or 10 percent bleach solution (1 part bleach to 9 parts water solution) between each cut. Wash and oil shears when you are finished. These practices avoid spreading the pathogen.

Avoid heavy nitrogen fertilization, especially in summer, when succulent growth is most susceptible to fireblight infection. Avoid splashing water. Chemical control is not always effective and needs to be applied preventively. Therefore, in years when warm, humid, wet weather coincides with flowering and leaf emergence, spray plants with a fungicide containing basic copper sulfate (Kocide) or an antibiotic (Agrimycin) to reduce infection. Applications of Agrimycin need to begin at the start of blooming and continue every 3-4 days during the bloom period. Application of Kocide should begin at bloom and continue every 7 days during bloom. Re-application following rain may be needed.

Some Resistant or Tolerant Plants