Controlling Florida Betony in the Landscape

Circular 867-11
View PDF picture_as_pdf
This publication is part of the Weed Wizard series. 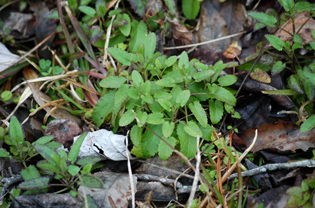 Florida betony (Stachys floridana) (also called rattlesnake weed and hedge nettle) is a problem weed in both turfgrasses and ornamentals. With the species name floridana, Florida betony is considered by many to be a native invader (Figure 1) that escaped its Florida borders in the 1940s and 1950s to become a problem weed from North Carolina south to Texas. We are not 100 percent certain of the origin of this plant.

Florida betony is a “winter” perennial and, like most plants in the mint (Labiatae) family, has a square stem with opposite leaves. Flowers are usually pink and have the classic mint-like structure (Figure 2). Unlike its relatives, it has the unique characteristic of producing tubers that look like the rattles (buttons) of a rattlesnake, hence the name “rattlesnake weed” (Figure 3). 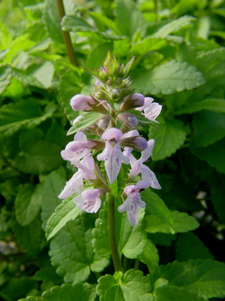 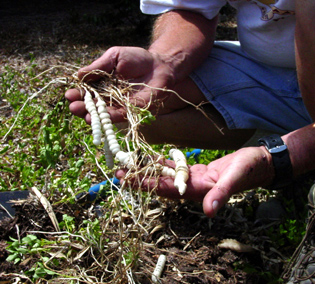 Figure 3. Tubers of Florida betony that look like the rattle of a rattlesnake, hence the name "rattlesnake weed."

Tubers of Florida betony can reach lengths of more than 1 meter in soils with high sand contents. The tubers are edible and some people relish their crisp, succulent flavor — who knows, maybe one day we will be figuring out how to grow Florida betony instead of killing it! In most of Georgia, Florida betony actively grows in the mid- to late fall and spring months. During the extreme heat of the summer months, growth of Florida betony slows and the plant may become dormant.

Control of Florida Betony in Turfgrass

The first line of defense against Florida betony in turfgrass is to use cultural practices that promote vigorous turfgrass growth and development. Florida betony does not readily infest turfgrass that is properly fertilized, watered, and mowed at the correct height and frequency. Florida betony is usually found in bare or thin areas of the turfgrass resulting from (a) improper mowing practices (cutting height is too low/high or turfgrass is not mowed at the correct time intervals); (b) improper watering (too much or too little); (c) improper fertilization (too much or too little, wrong date of application, wrong N-P-K ratio); (d) the use of a non-adapted turfgrass; or (e) failure to control insects and diseases. Refer to Extension Bulletin 773, Lawns in Georgia, for an in-depth discussion of proper turfgrass maintenance practices.

The impact of good cultural practices on a Florida betony control program cannot be overemphasized. The amount of Florida betony infesting a turfgrass will be less if the turfgrass is properly maintained. Preemergence herbicides such as oryzalin (Surflan), benefin (Balan), pendimethalin (Halts, others) and bensulide (Betasan, others) will not control Florida betony. In turfgrass, products containing atrazine (Aatrex, Hi-Yield Atrazine, Scotts Bonus S, others), 2,4-D (various trade names), dicamba (Banvel, others), and 2,4-D + MCPP + dicamba (Ace Lawn Weed Killer, Wipe-Out, Weed-B-Gon Lawn Weed Killer, 33 Plus, others) may be used for control.

Centipedegrass and St. Augustinegrass are not as tolerant of 2,4-D and dicamba herbicides as are bermudagrass, zoysiagrass and tall fescue. Use 2,4-D or dicamba-containing herbicides only if the product is labeled for use on centipedegrass and St. Augustinegrass (some formulations containing these herbicides are specifically made for these grasses). Always apply herbicides that contain 2,4-D, dicamba or MCPP during the cool months of the year, when Florida betony is actively growing. Applications during the hot summer or cold winter months are not effective in controlling Florida betony.

Atrazine is recommended for use on centipedegrass, St. Augustinegrass, zoysiagrass and dormant bermudagrass. This herbicide is not recommended for use on tall fescue because this turfgrass is not tolerant to atrazine. Spot treatments of glyphosate (Roundup, others) also can be used to control Florida betony. The turfgrass will be severely injured or killed, however, if glyphosate contacts green turfgrass leaves.

The preferred time to treat Florida betony with sprayable formulations of atrazine (Hi-Yield Atrazien) is mid- to late October during the fall growth flush. An additional atrazine application in mid- to late February should coincide with the spring growth flush on warm season turfgrasses. Do not apply fertilizer-based atrazine products such as Scotts Bonus S to centipedegrass during late fall or late winter as applications of fertilizer to centipedegrass can predispose this warm-season turfgrass to winter injury.

Many new herbicides have been introduced to the turfgrass market, and experiments conducted by the University of Georgia have shown many of these herbicides to provide excellent control of Florida betony. Herbicides that provide good to excellent control of Florida betony are Monument (trifloxysulfuron), Manor (metsulfuron), Revolver, (foramsulfuron) and Speed-zone Southern(carfentrazone, 2,4-D Ester, mecoprop, and dicamba).

Florida betony can be controlled in turfgrasses with carefully-timed herbicide applications. There is a marked difference in the tolerance of the various turfgrasses to the presently available herbicides. Read the product label to determine if the herbicide is labeled for use on a particular turfgrass species.

Control of Florida Betony in Ornamentals

Few herbicides are available to control Florida betony in ornamentals. Several cultural practices, however, can provide good control of Florida betony in landscape situations. Coarse textured mulches such as pine straw or pine bark applied to a depth of 2 to 4 inches, will smother the plant and help limit the establishment of Florida betony. Landscape fabrics also may be used under various types of mulches and will help prevent Florida betony emergence. Other non-chemical control options include hand-pulling and hoeing. Since this weed reproduces from underground tubers, you must completely remove all tubers when hand-weeding.

In ornamentals, dichlobenil (sold under the trade name Casoron®) provides excellent control of Florida betony in most established woody ornamentals. Dichlobenil is labeled for use in a wide variety of woody shrubs and trees, roses and English ivy, but it is not recommended for use in either annual or perennial flowers. Dichlobenil is a volatile herbicide that readily escapes as a gas under high air and soil temperatures. The ideal time to apply dichlobenil to control Florida betony is from early November through mid-February. Cool temperatures at this time of year will help prevent dichlobenil loss from the soil and will improve Florida betony control.

Products containing the active ingredient glyphosate (i.e., Roundup®, numerous other brand names), can be used to control this plant if applied as a post-directed application (spray or applied directly to Florida betony plants without contacting desirable plants). Also consider using glyphosate if you are going to establish a new ornamental planting in an area containing Florida betony. A 5 percent v/v spray solution of glyphosate (use a glyphosate product that is 41 percent or greater when making the 5 percent v/v spray solution, 5 percent v/v = 6.4 fl. ozs. of a 41 percent glyphosate in 1.0 gallon of water) should be applied 1 week prior to cultivating the area. This will help reduce much of the Florida betony population, but be aware that repeat applications to eliminate survivors will be necessary.

For best control, apply at the time of Florida betony flowering. Glyphosate can cause severe injury if the spray mist contacts either the green bark or foliage of ornamentals. Avoid applying glyphosate near ornamentals on windy days.

Trade and brand names are used only for information. Cooperative Extension, University of Georgia College of Agricultural and Environmental Sciences does not guarantee nor warrant published standards on any product mentioned; neither does the use of a trade or brand name imply approval of any product to the exclusion of others which may also be suitable.