Copperheads are venomous snakes and members of the pit viper family. Pit vipers have a heat-sensing organ in a facial pit located between the eye and the nostril. The organ is useful in locating food by detecting the body heat of prey species. Copperheads are not generally aggressive snakes and rarely injure people. They are secretive but valuable members of the wildlife community in Georgia. They range throughout most of Georgia and occupy a variety of habitats. This publication discusses general aspects of their life history.

Southern Copperhead: The southern copperhead has pale beige to almost pink background color (called the "ground color"). It has 13 to 20 wide, dark bands along its length in the shape of an hourglass. The two halves of the hourglass often do not meet along the spine. The head is a copper color. The young look similar but have a sulfur yellow tail. Southern copperheads are stout-bodied snakes, usually 24 to 36 inches long as adults. The longest specimen ever reported is 52 inches long (4 feet, 4 inches). The southern subspecies is generally larger than the northern subspecies. 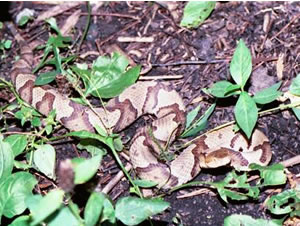 Northern Copperhead: The northern copperhead's ground color is darker than the southern subspecies. The color varies from brown to tan but has the familiar hourglass bands, which generally do meet along the spine. It also has the copper-colored head, and young specimens have the yellow tail. Most adult northern copperheads are 26 to 34 inches long, and the record is 53 inches (4 feet, 5 inches).

In Georgia, the northern copperhead is found in the mountainous counties of north Georgia. The southern copperhead is found below the fall line but not in the most southeastern counties along the Florida line. In southwest Georgia, it is found along the Alabama-Georgia border extending into two counties in north Florida. In the Piedmont, the two subspecies overlap in distribution, and specimens take on a range of appearances falling between the typical patterns for each subspecies.

All North American snakes use the environment to warm their bodies. Snakes are called "cold-blooded," but a better term to describe this characteristic is "exothermic," meaning they use external rather than metabolic heat for warmth. A copperhead's core body temperature can vary throughout the year from 39.2 degrees to 105.8 degrees F. Body temperature also varies daily. The snake cools overnight and must use the sun's heat to warm itself during the day.

The venom attacks muscle and blood systems. Bites are painful, but this snake has the least toxic venom of all venomous snakes in the United States. Fatalities are extremely rare.

Reproduction: Copperheads can mate in both fall and spring. They are capable of breeding every year, and give birth to live young between July and August. As few as 2 or as many as 17 young are produced, but the typical litter size is 6 to 9 young. The young are 8 to 10 inches long at birth and receive no parental care. Up to 60 percent of the females in a population may carry young in a year. Generally, females begin breeding at 3 years old. Larger and presumably older females are more likely to breed, but good health and high-energy reserves or body fat may be important in determining which females breed. Larger individuals do most of the breeding. Clutch size is larger in years with higher than average precipitation.

Female copperheads may gather in specific areas prior to giving birth. These areas are called "birthing rookeries." We do not know how many females gather together in this manner. Gravid females do not feed while carrying young. Males usually outnumber females in both the general population and in the litter, but we don't understand why this occurs.

Feeding: Copperheads are predators near the top of their food chain. They are ambush predators, generally lying in wait for a meal. Copperheads typically feed on mice and often take the young while they are still in the nest. These predators are known to also eat frogs and toads, insects (like cicadas), caterpillars, salamanders, small birds and shrews. They can survive during the summer on just one meal every three weeks. Of course, they survive all winter without eating. Studies show that copperheads may consume twice their body weight in prey per year. They can survive on as few as eight meals during the active season. Generally, they consume 1.25 to 2 times their body weight per season. Prey items average 20 percent of body weight.

A study in Kansas found that prairie voles were the most commonly eaten prey and cicadas ranked second. Interesting prey items identified from copperhead stomachs included hawk moth larvae and a box turtle. Copperheads eat more than 30 different prey items. Young probably eat a different array of items than adults. For example, the young may eat insects, caterpillars and small frogs while the adults take more mice and birds. Young are known to use their yellow tails as lures to attract frogs and toads to within striking distance.

Behavior: Copperheads often lay motionless waiting for prey to wander within range. Copperheads are pit vipers and use their heat-sensing pit to locate prey and guide their strike. The pit helps them locate warm-blooded prey after it has been bitten. The snakes also find the envenomed prey using their sense of smell.

They are not aggressive snakes and are often described as lethargic. They rarely strike unless stepped on or handled. Copperheads are most active at dawn and dusk between March and October. During the winter, they den alone or with other copperheads and rattlesnakes. They will often use the same den site for many years. They are inactive in cold weather but are not true hibernators. Copperheads are almost entirely terrestrial but swim well and probably disperse across aquatic habitats.

Copperheads are nocturnal during the summer or warm-est months and shift to a diurnal activity pattern during cooler months in spring and autumn. This reflects their need to bask in the sun on cooler days in spring and autumn and to avoid the hottest part of the day in summer.

Fighting between males may occur during the breeding season. The general pattern for copperheads is for two males to approach one another, raise their upper bodies off the ground, and try to push the rival to the ground. The male that pins his rival's head to the ground is the dominant individual. The whole process is like the children's game of "thumb wrestling." Biting has never been reported during these wrestling bouts.

Habitat: You might find a copperhead in almost any upland habitat. Northern copperheads are found in rocky areas and wooded hillsides. They are often found around sawdust piles, slab piles or rotting buildings. They are also found along wooded edges and brushy areas. Power line rights-of-way make excellent habitat if not mowed. Southern copperheads seem to prefer low-lying areas near streams and swamps, and are often confused with the cottonmouth water moccasin, which is larger (heavier-bodied) and readily swims. Copperheads prefer to avoid the water. Wooded areas with brush piles, fallen trees or logs are good habitat.

Enemies: Copperheads occasionally fall prey to kingsnakes. Hawks, owls or wild pigs may consume them occasionally, but they do not hunt for them. Humans are their greatest threat; we destroy their habitat and kill them outright.

General: One northern copperhead was documented to have survived 29 years and 10 months, but few attain this age. One study marked and released several adult copperheads and found them, one year later, within 100 yards of their release site. Their typical home range is unknown in Georgia but, in general, we assume they wander little except in search of mates. Copperheads are the upland ecological equivalent of cottonmouths. One researcher used the pattern of complete and incomplete hourglass markings to identify individuals.

Populations: Populations may average 2.5 to 4 copperheads per acre in suitable habitat with adequate prey.

Copperheads do not transmit diseases to humans. Venomous snakes, however, should never be handled by anyone other than an expert.

Copperheads have no direct economic value to humans. Their skins have been used to make leather for decorative belts and hatbands. They act as predator control for mice and rats, and are thus beneficial to humans, providing a net economic gain by their presence.

Damage: They cause no direct damage to human crops or livestock.

Medicinal Use: They have no direct medicinal value. Recently, however, there has been increased interest in the pharmacological benefits of snake venom. In a recent 10-year study, 308 copperhead bites were reported. Not a single person died from the copperhead bite.

Copperheads are unprotected in Georgia.

Populations can be reduced around human structures by removing preferred habitat such as rock piles, woodpiles, slab piles, sawdust piles and abandoned buildings. Keep grass and weeds trimmed or mowed near dwellings, barns and other buildings.

Generally reversing the methods of control would provide habitat for these beneficial predator.

Native American use — none.