Tropic Croton Identification and Control in Cotton and Peanut

Recent surveys in Georgia show that tropic croton (Croton glandulosus var. septentrionalis) is the third most troublesome weed in peanuts and fifth most troublesome weed in cotton (Table 1). The increase in its prevalence in Georgia can be attributed to several factors including a change in herbicides, particularly the loss of dinoseb in 1986, and the fact that many standard herbicides currently used in cotton and peanut are ineffective on this weed. Also, mature seeds are forcibly discharged from the plant and are readily eaten by birds, which facilitates dispersal and spread. 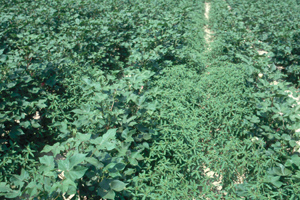 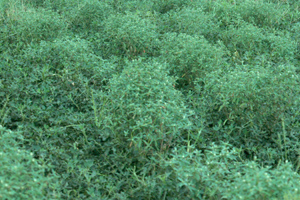 Tropic croton, also known as northern croton, is a member of the Euphorbiaceae (Spurge) plant family. Other members of this family include such common weeds as hophornbeam copperleaf (Acalypha ostryifolia), spotted spurge (Euphorbia maculata), and wild poinsettia (Euphorbia heterophylla). It is a summer annual that can grow up to 20 inches tall. Tropic croton has oblong to egg-shaped leaves with sharply toothed margins. Separate male and female white flowers, approximately 0.4 inch long, occur in terminal, unbranched, elongated inflorescences called racemes. One of the keys to identifying seedlings of this plant is the presence of stellar (star-shaped) hairs on all plant parts. These stellar hairs help distinguish tropic croton from other look-alike weeds such as prickly sida (Sida spinosa), velvetleaf (Abutilon theophrasti), and spurred anoda (Anoda cristata). 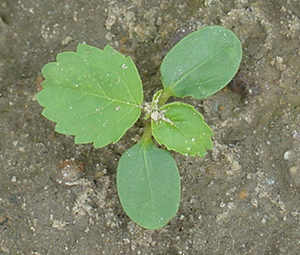 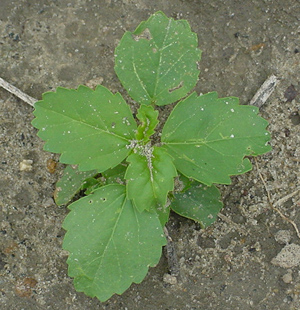 Research on the competitiveness of tropic croton in cotton is limited. In one study conducted in North Carolina, researchers measured a 4.1 percent loss in yield for each tropic croton plant per 32 feet of cotton row. These yield losses were based on season-long interference. Although this weed is much less competitive than several other weeds such as common cocklebur (Xanthium strumarium) and Palmer amaranth (Amaranthus palmeri), tropic croton can still cause significant cotton yield losses. Thus, it is critical to manage this weed during the first six to eight weeks after cotton emergence to eliminate potential yield losses. Additionally, tropic croton present at harvest may affect harvest efficiency.

Limited research has been conducted on the competitive effects of tropic croton in peanut. Preliminary full-season competition studies conducted in North Carolina have shown that tropic croton at a density of 32 plants per 20 feet of row has the potential to reduce peanut yields between 28 and 54 percent. Consequently, tropic croton is considered to be less competitive than many other troublesome broadleaf weeds of peanut including Florida beggarweed (Desmodium tortuosum), sicklepod (Cassia obtusifolia), bristly starbur (Acanthospermum hispidum), and wild poinsettia.

Roundup Ready Cotton. Tropic croton can be effectively controlled in Roundup Ready cotton with timely labeled applications of glyphosate (Roundup and other products) applied over-the-top of cotton during early season followed by a timely postemergence-directed herbicide application. Effective directed herbicide options include glyphosate alone or tank-mixed with labeled partners, MSMA plus Cotoran (fluometuron), MSMA plus Cobra (lactofen), MSMA plus Caparol/ Cotton-Pro (prometryn), or MSMA plus Direx (diuron). All of these directed materials effectively control tropic croton that is less than 3 inches tall at application and growing in a favorable environment. Additionally, Cotoran, Direx and Caparol/Cotton-Pro will offer several weeks of residual weed control. If tropic croton is larger than 3 inches at application, glyphosate or Cobra mixtures will likely be more effective. Low rates of Cobra (6 to 9 fl oz) may be mixed with Direx or Caparol/Cotton-Pro plus MSMA in directed applications to obtain postemergence and residual tropic croton control.

Conventional Cotton. Tropic croton can be quite challenging to control in conventional cotton since there are no effective over-the-top herbicide options available. Staple (pyrithiobac) or MSMA applied over top of cotton and tropic croton only provides suppression of croton if it is less than 2 inches tall. Thus, it is critical to use a preemergence herbicide for managing this weed. Cotoran may be adequate in fields with very light infestations. However, Cotoran plus Command (clomazone), Zorial (norflurazon), or Staple applied preemergence would be a better choice in fields with moderate to severe infestations. Selecting Command, Zorial or Staple as a tank-mix partner with Cotoran should be based on other weeds present, rotational concerns, and herbicide application restriction limitations. Before using Command, refer to the most recent product label or edition of the Georgia Cotton Production Guide for use of in-furrow insecticides that protect cotton from potential Command injury.

There is no herbicide labeled for use in peanut that provides full-season weed control with a single application. The best approach to controlling weeds in peanut is to use a combination of both soil-applied and postemergence herbicides.

1Paraquat is sold as Gramoxone SL, Firestorm or Parazone 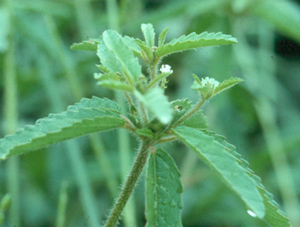 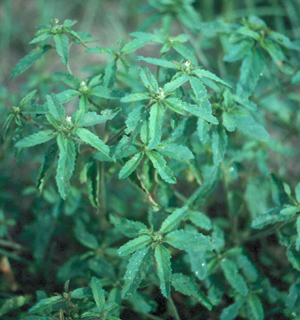