Azalea bark scale (ABS, Eriococcus azalea, Figure 1) poses a serious threat to azaleas, rhododendron, and Pieris (Andromedas) in Georgia. ABS is a soft scale insect; unlike armored scale insects, the nymph and female soft scales secrete a protective coating of waxy crust on their body that cannot be separated from the scale insect. ABS also is found on blueberry, hawthorn, huckleberry, poplar, and willow. They often are mistaken for mealybugs because of their elongated, fuzzy white appearance. 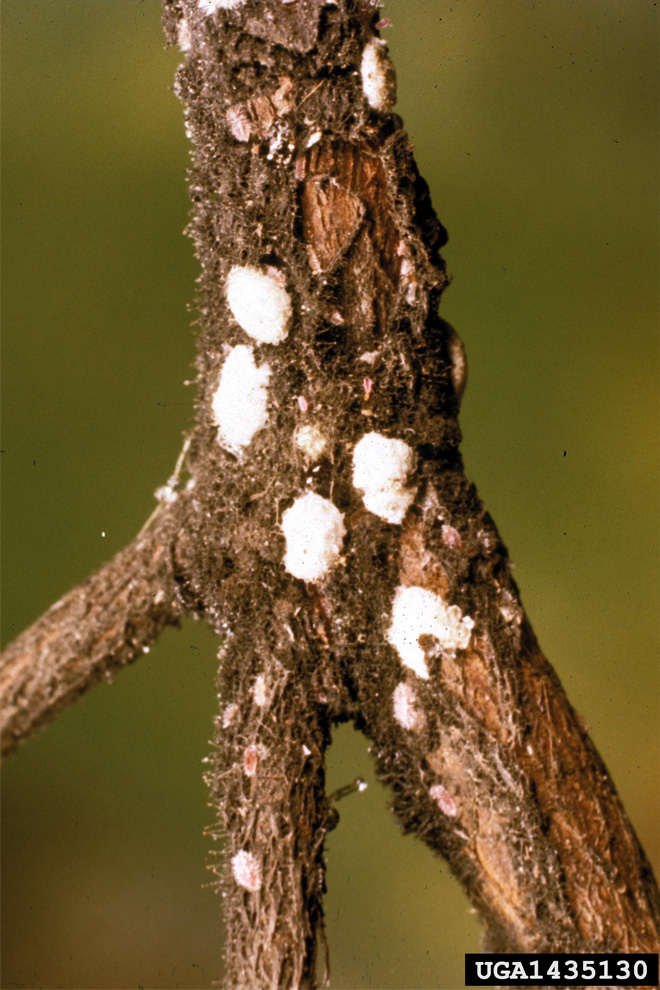 Females of the ABS lay purple-colored eggs in white, felt-like eggmasses (ovisacs) during the spring (Figure 2). T he purple-red females reside inside the ovisac, which is about 3 mm long. The eggs may last for 2 to 3 weeks and hatch by mid-May. The first nymphal stage of the ABS is referred to as a crawler. Crawlers are red-colored and lack a white crusty covering. They are the only mobile stage of ABS, as they have legs and antennae. 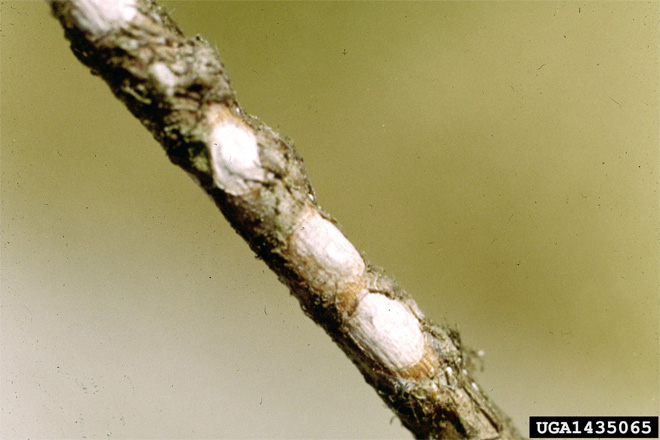 When crawlers find a crack or crevice on the surface of bark, they settle on those areas and begin feeding by inserting their long, threadlike or needlelike mouthparts into the bark to reach the phloem tissue. Phloem tissue is where the nutrients are transported within the plant, and it runs along the stem beneath the bark. ABS also is found in areas where azalea branches fork. They shed their legs and antennae and grow into their second and third nymphal stages. ABS can undergo two generations per year in Georgia. The females mature by September, and lay eggs in ovisacs. The emerging, second-generation ABS nymphs overwinter within cracks and crevices in the stem (Figure 3). 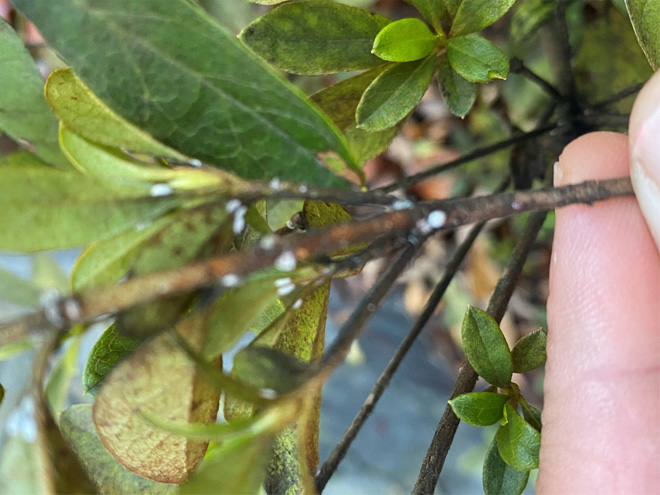 Symptoms of ABS infestation include dropping yellow leaves and dying branches (Figure 4). Developing nymphs and females excrete a sugary syruplike liquid called honeydew on to the bark and leaves. As time passes, the surface of the bark, and sometimes the leaves, turns black because it gets infested with a sooty mold fungus that feeds on the sugary secretions (Figure 5). The white crusts of scale insects are easily visible when the azalea bark turns completely black (Figure 6). An ABS infestation rarely kills the plant unless it is extremely severe and uncontrolled. 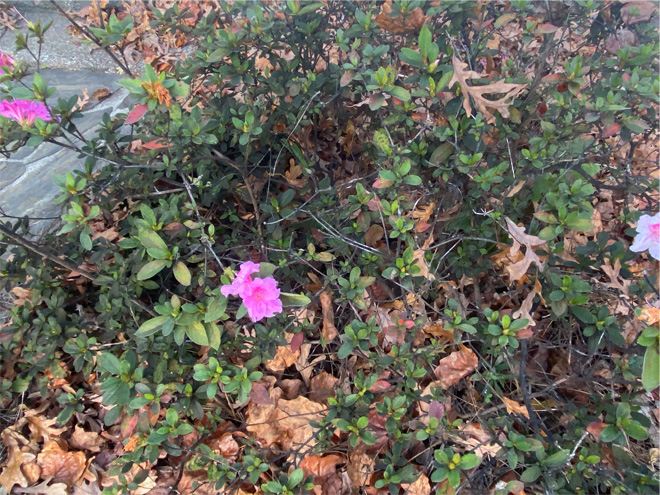 Figure 4. Thinning or loss of leaves because of azalea bark scale infestation on an azalea. Photo: Chris Hardin, University of Georgia. 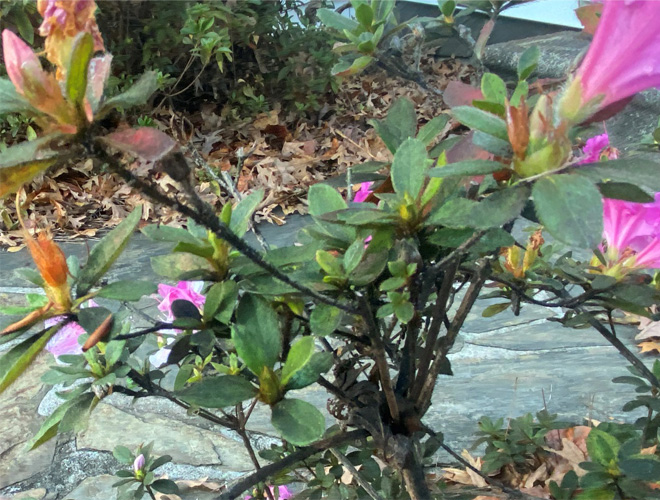 Figure 5. Infection of sooty mold fungus on the honeydew excreted from azalea bark scale on an azalea. Photo: Chris Hardin, University of Georgia.

ABS often attacks weak, stressed plants. Keeping plants healthy with proper fertilization and irrigation will improve tolerance to ABS infestation. Pruning and removal of affected branches (leaves and stems) in the winter will help reduce the severity of any ABS infestation. Several predators and parasitic wasps attack ABS and will reduce their populations. If you avoid broad-spectrum contact insecticides, this encourages the activity of ABS predators and parasitic wasps. If the infestation is not severe, ABS can be removed physically by scaping the scale insects from the bark surface using a brush or fingernail.

Spraying with horticultural oil or summer oil after the azaleas bloom in the late spring will help control ABS. T he spray coverage is essential—if the infestation is severe, a second application might be necessary within the same season. The efficacy of the oil spray can be monitored on the second generation in September or in the spring the following year. If the oil spray application was effective, the production of new white crust will be reduced. The white crusts of old ovisacs do not peel off naturally, and they can remain attached to the bark whether the scale insect is dead or alive. The ovisac of dead scale insects will not be juicy when crushed. If the scale insects are still alive, they will be juicy when crushed; this would indicate that the oil or pyrethroid insecticide spray application did not adequately control the ABS, and a follow-up application might be necessary. Avoid spraying when beneficial insects and pollinators are active. For the most current insecticide recommendations, contact your local county Extension office by calling 1-800-ASK-UGA1. 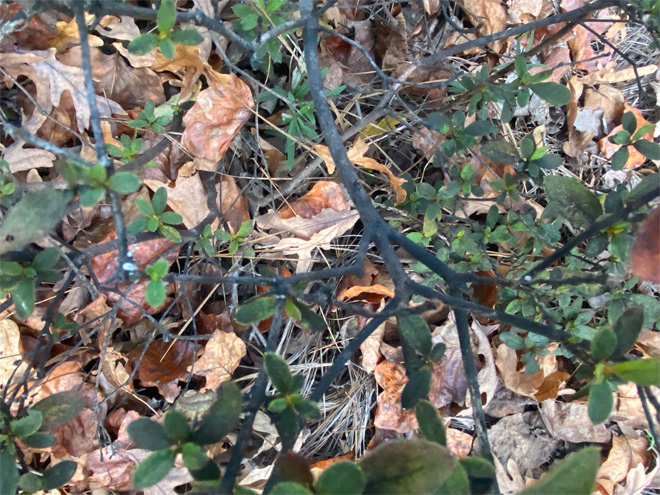 Figure 6. The bark of this azalea stem has turned completely turns black because of a sooty mold fungal infection. Photo: Chris Hardin, University of Georgia

Gilrein, D. (2015, May 29). Matters of scale: Wax and azalea bark scales. Branching out: An IPM newsletter for trees and shrubs. https://ecommons.cornell.edu/bitstream/handle/1813/60591/BranchingOut_MattersOfScale5-15.pdf?sequence=1&isAllowed=y