Phony peach disease (PPD) is a reemerging disease of peaches in the Southeast that can result in severe economic losses if left unmanaged. PPD was first observed near Marshallville, GA, in 1885. By 1915, it had spread throughout the middle and southern Georgia peach production areas, significantly affecting commercial and homeowner peach quality and yield. In 1929, roguing of diseased trees was recommended by federal and state authorities. This cultural practice of inoculum reduction through tree destruction continues to be the primary disease management tool for PPD to this day. Since infected peach trees appeared dwarfed, they were initially referred to as pony trees, but later the disease was called phony peach. It was speculated that the name came from the infected trees seeming to be healthy with dark green and abundant foliage but producing limited fruit of poor size and quality. Historically, the disease was reported as far west as Texas and as far north as Pennsylvania, but in recent years, it has been reported only in the southeastern United States (Figure 1). The current projected PPD range is based on recent surveys of peach production regions and is likely a reflection in part of the dramatically reduced commercial peach production in the southeastern region.

Phony Peach Disease is caused by Xylella fastidiosa subspecies multiplex (Xfm), a gram–negative, fastidious bacterium (Figure 2). Xfm infects a wide range of over 600 host plant species, but Xfm actually is pathogenic on a much smaller number of species. Xfm inhabits the plant xylem, the structural piping system for moving water and nutrients from the roots to the aboveground parts of the tree. The bacterium is vectored primarily by sharpshooter insects as they ingest xylem fluid while feeding on diseased plants. Bacteria are then egested into the xylem of healthy plants, where they survive and subsequently cause disease. Xfm is only found in the xylem of the peach roots, stems, and shoots due to its xylem–limited nature.

The primary natural vectors of Xfm in peach are two species of sharpshooters, Homalodisca vitripennis (Figure 3) and Oncometopia orbona. Both have a wide geographic range and are active on peaches during early spring, summer, and fall. Alternative wild hosts serve as inoculum reservoirs for the bacterium. Bacteria are transmitted among alternative host species by the vectors and possibly by natural root grafting. Sharpshooter vectors transmit the bacteria to peaches from wild hosts and among peach trees in orchards. In addition to vector transmission, the bacteria also can be moved to new peach orchards by the transfer of Xfm–infected nursery material (Figure 4).

Insect vectors transmit the bacterium by feeding on infected plant tissue, then moving to a healthy plant and feeding again. The xylem–feeding sharpshooters probe young tissue, as opposed to older growth, to extract sap. In the insect, the sap is transported to the midgut via the esophagus, utilizing a noncirculative mechanism. Insect saliva is secreted into the plant where the bacteria begin to colonize and multiply in the xylem vessels to form a biofilm—a dense film of bacterial cells associated with virulence and important for surface attachment of the bacteria. Eventually, symptoms begin to develop after the bacteria spread and move into the host plant’s root system. Historically, natural root grafting also has been demonstrated as a means of disease transmission from tree to tree, but this has not been reevaluated in peaches in recent years.

The first symptoms of Phony Peach Disease appear 12–18 months after initial infection. In other plant species that can be infected with Xylella, replication of the bacteria and biofilm formation leads to the production of tyloses, which are balloon–like projections that fill the vessels in the host plant and result in blocked xylem elements. Since water and nutrients flow through the xylem, the reduction in xylem fluid flow results in scorch–like symptoms in leaves and plant death within 1 to 2 years. However, peach trees are unique in that scorch symptoms are not observed, and tree death does not rapidly occur. In contrast, peach trees slowly decline in overall tree health, prematurely dying after several years. Since scorch is not observed, PPD–infected trees are initially difficult to distinguish from healthy trees. Typical symptoms of PPD include shortened internodes, a flattened tree canopy, dark green (Figure 5) or bronze (Figure 6) foliage (depending on tree age and time of year), early leaf development (Figure 7), and reduced fruit size and quality (Figure 8). As infected trees age, shoot dieback occurs (Figure 9). In healthy trees, an estimated 4 to 6 ft of new shoot growth is documented within a season, compared to PPD–infected trees, which often only have 6 in. or less of new shoot growth. 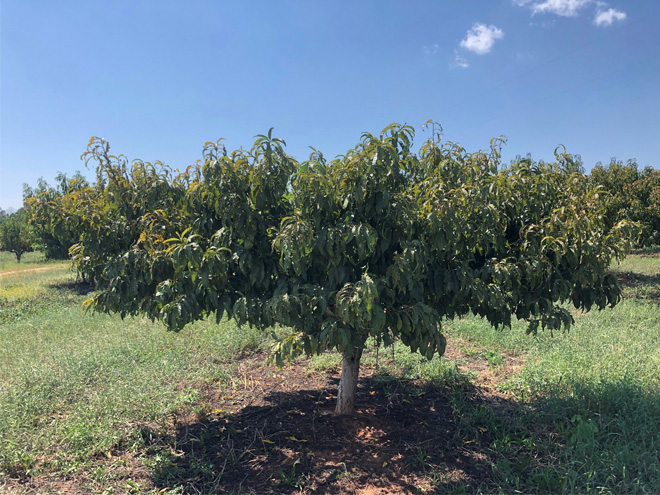 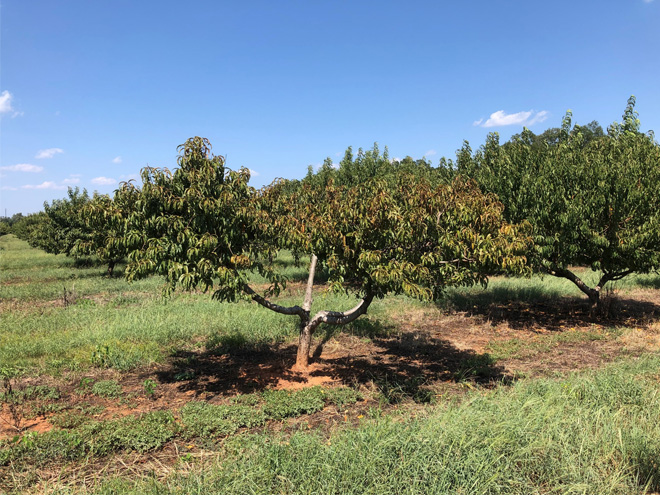 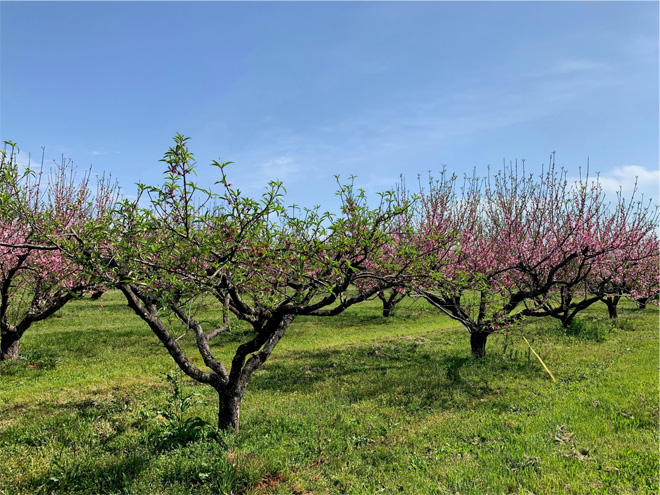 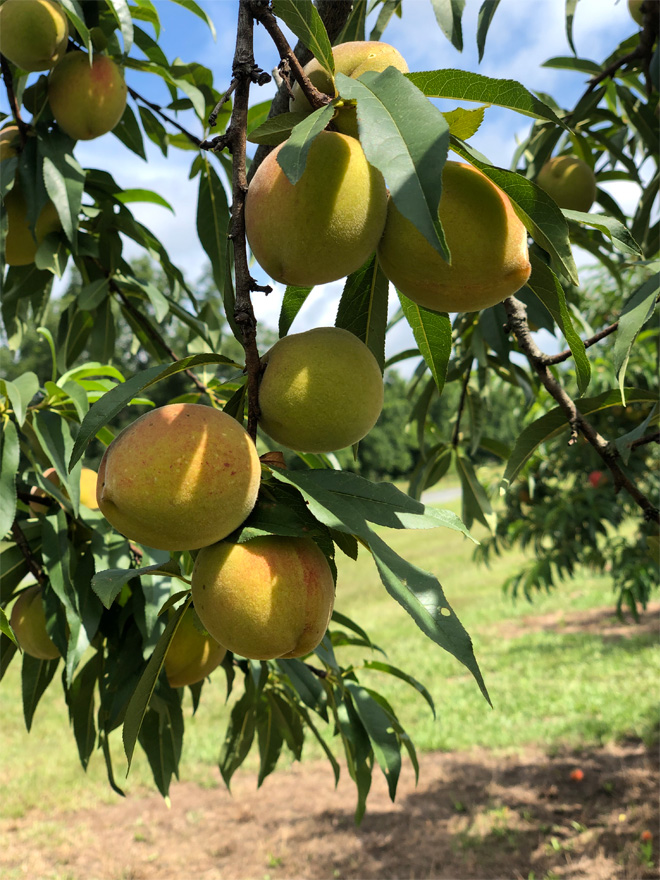 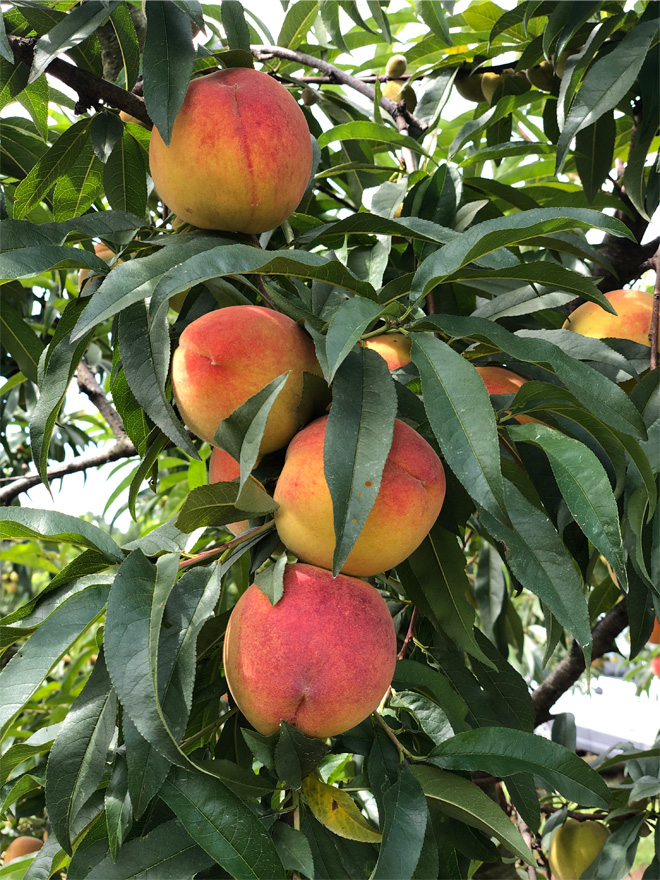 Figure 8. Photographs taken on June 23, 2020, on cultivar ‘Julyprince’ showing fruit on a phony peach tree (left, A) that are less mature and ripe compared to fruit on a healthy peach tree (right, B). 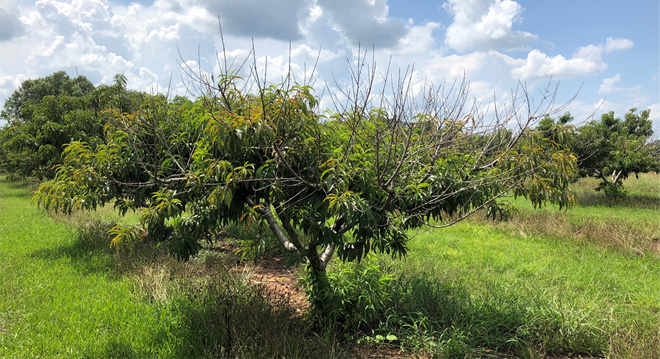 Historically, visual identification of PPD was used by growers and scouts familiar with visible characteristics of an infected tree. Even today, the most practical and least expensive option for growers when detecting this disease is visual identification from field symptoms. However, even with practice it can be difficult to accurately identify PPD trees, especially in the early stages of disease development. Molecular techniques are available to provide rapid and reliable detection of PPD. Novel primers for the detection of PPD were recently developed by researchers at the USDA–ARS Southeastern Fruit and Tree Nut Research Station in Byron, GA. A field–deployable test, AmplifyRP XRT+ for Xf, recently was developed by Agdia for rapid and accurate detection of the bacterium. AmplifyRP XRT+ is a highly specific DNA amplification and detection system offering comparable sensitivity to PCR methods (Figure 10). Unfortunately, as with other methods the preferred tissues from peach for bacterial confirmation are roots, as roots have the highest titer of Xylella and are thus less likely to result in a false negative. The need to collect root tissue for bacterial confirmation remains a significant hurdle for routine molecular detection.

Current management options for PPD are limited. Among the available options, ensuring that newly purchased trees are disease–free is very important. Trees should only be purchased from reputable nurseries where PPD generally does not occur. Currently there is no evidence that PPD is spread through seed or budwood, but insect vectors could readily move the bacterium from wild hosts to commercial nurseries. As such, most commercial peach nurseries are now located outside of the major PPD zones. Once PPD is identified in an orchard, control efforts primarily are focused on preventing in–orchard spread of the disease. This typically involves removal and destruction of symptomatic trees, as symptomatic trees should be removed as soon as possible after confirmation to prevent further spread. In addition, wild alternative hosts of the bacterium, such as Chickasaw plum (Prunus angustifolia), should also be destroyed within 328 yd (300 m) of peach orchards, as these can serve as inoculum reservoirs for Xylella bacteria. Orchard floor management is a further control point for reducing disease pressure, since Johnsongrass and other weeds also can serve as a reservoir for inoculum. A weed–free strip should be maintained under trees, and row middles should be mowed frequently. Soil–drench applications of Imidacloprid, a systemic insecticide, will slow in–orchard spread of PPD by reducing vector populations. Other management strategies exist for other Xylella–related diseases, but these either do not work or have not been studied for PPD management.

Hutchins, L. M. (1933). Identification and control of phony disease of the peach (Bulletin No. 78). Georgia State Board of Entomology.