Aphids on Flowering Ornamental Plants in the Landscape

Aphids are soft-bodied insects that feed on plant juices by using their piercing and sucking mouthparts. Most aphids are about 2 mm in length, but some species can be longer than 4 mm. They have three pairs of legs, a pair of antennae, and a pair of tube-like structures on the back called cornicles (Figure 1). Young aphids closely resemble adults but are smaller in size. The older nymphs and adults of more common species of aphids generally are a light yellow-green color, although some can be red, black, or other colors. The young nymphs are an of-white color. Several aphid species are specialists and feed only on hosts from certain plant families. Others are generalists and feed on hosts from multiple plant families. Many aphid species, such as the green peach aphid (Myzus persicae), the rose aphid (Macrosiphum rosae), or the crape myrtle aphid (Tinocallis kahawaluokalani) attack ornamental plants such as daylilies (Figure 2), roses (Figure 3), or crape myrtles (Figure 4). On daylily leaves, aphids of all stages of nymphs and adults can be found congregated together, especially within the whorls of newly developing leaves in the base of the plant (Figure 2). They also congregate on the growing shoots of roses (Figure 3) and on the undersides of crape myrtle leaves (Figure 4). 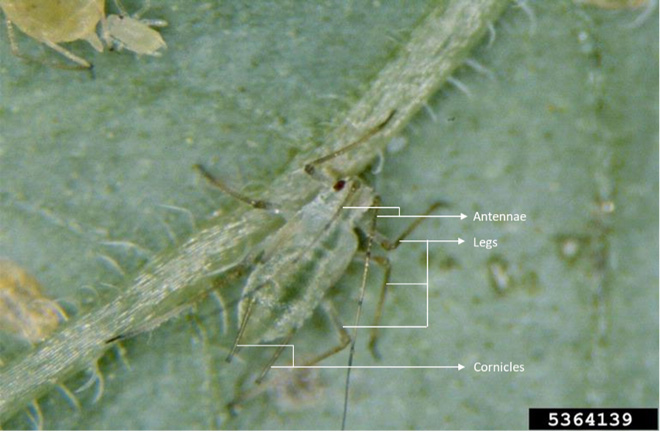 Figure 2. Aphids on daylily plants in the spring. Adults and nymphs can be seen co-existing in the whorls of the developing leaves of daylilies. Photos: Shimat Joseph. 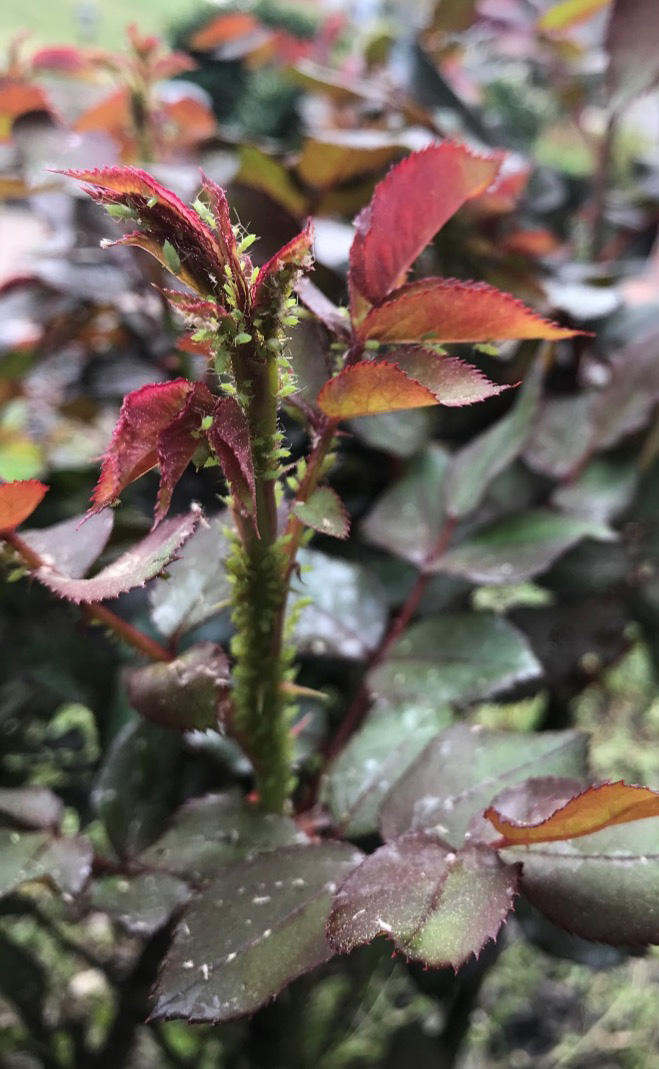 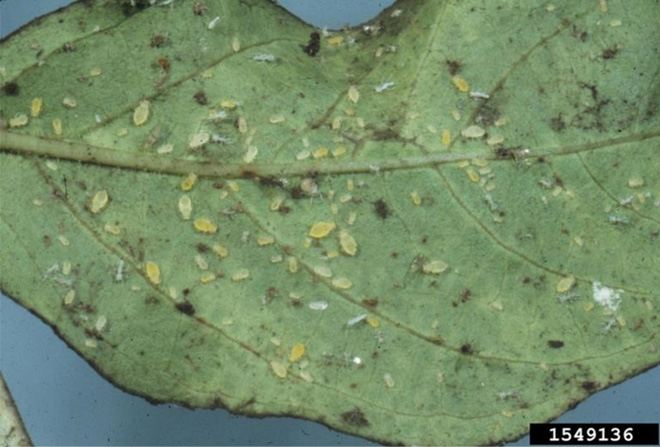 Aphids undergo several generations each year. The typical life cycle begins with overwintering eggs that hatch in spring as temperatures warm and plants begin to flush with new foliage. The aphids that hatch from these eggs are all females that move toward new plant growth to begin feeding. These founding females give live birth to daughters that are clones of their mothers. The population can grow rapidly in favorable conditions, and all members of the colony are wingless females that produce only female of spring. If the quality of the food source declines or the host plant becomes overcrowded, winged females may be produced. They can then disperse to find new habitats and resume producing wingless females. As daylength shortens and temperatures begin to cool in the fall, both male and female of spring are produced. These sexual forms mate and produce the eggs that will overwinter in protected places, such as within bark crevices and under lichens. The life cycle of some species of aphids is complex, as they can switch between primary and secondary hosts. They repeatedly can infest the secondary hosts, which vary by location and time of year.

On ornamental plants such as daylilies, roses, or annual flowering plants, the mere presence of aphids can give the plants an unsightly appearance. As the aphids molt through the nymphal stages, they leave the cast skin (which often is white) stuck on the leaves (Figure 5). Most of the aphids themselves are light green, so they go unnoticed. The cast skin may be the only indication of  an infestation. 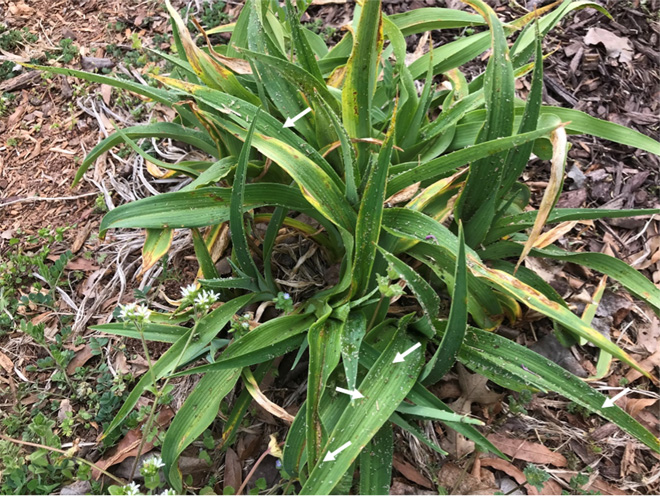 The nymphs and adults feed on plant juices by inserting their mouthparts into the phloem tissue, where sugars are transported. Because their mouthpart is attached to the phloem tissue, aphids constantly consume more than what they need. The excess sugars are excreted from the aphid’s system, and the sugary, viscous excreta commonly is referred to as honeydew. Tis dense fluid often is sticky and produces an unpleasant layer on leaf surfaces. Over time, sooty mold fungus colonizes the honeydew layer, and the leaves turn from green to black (Figure 6). Ants also may be attracted to the honeydew. Since the ants tend to nurture the aphids, this creates an additional nuisance. 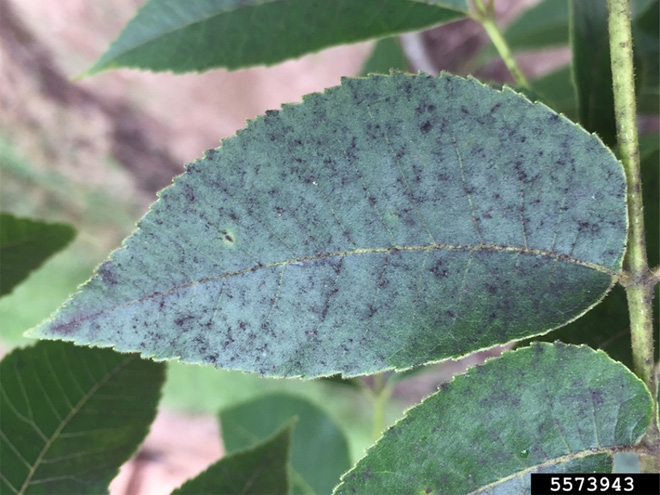 Aphid populations usually are kept under detectable densities in landscapes through the activity of natural enemies. Common aphid predators include lady beetles (Figure 7) and the larvae of lacewings and hoverflies. Parasitic wasps also are effective in reducing aphid populations. Parasitized aphids become larger in size and turn leathery brown or shiny black. These parasitized aphids commonly are referred to as “mummies” (Figure 8). When a parasitic wasp adult emerges from and leaves the host aphid, it leaves an exit hole. In spring, the densities of aphids’ natural enemies are lower than during other times of the year. Tis contributes to favorable conditions for aphid population outbreaks. Refrain from applying nitrogen fertilizer if an infestation has been detected, as doing so can lead to the development of a dense colony. 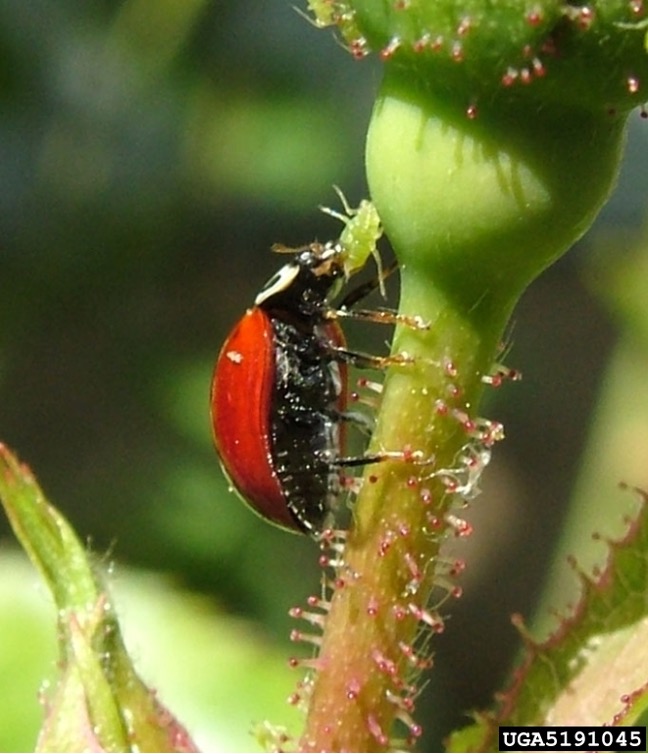 If aphid populations are severe, it’s advisable to spray with insecticidal soap solution or horticultural oil to suppress the population.

However, repeated applications often are necessary. Insecticidal soap solution or horticultural oil is effective only when applied directly onto the aphids. Because aphids colonize at the bases of leaves (including the unopened whorls of developing new leaves) in most cases, it’s essential to fully cover them with contact insecticide. Systemic insecticides also are effective against aphids. Carefully follow the instructions provided on the insecticide label before using the insecticide—the label is the law. These insecticides also can negatively affect beneficial insects—such as the previously mentioned natural enemies and visiting pollinators. Contact your county Extension office for recommendations regarding insecticides. 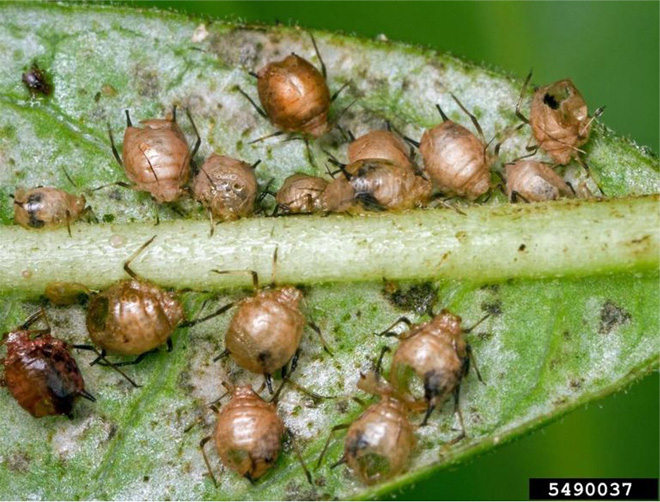