An Introduction to Hemp Chemistry and Lab Results

With the passage of the 2018 U.S. Farm Bill, industrial hemp (Cannabis sativa L.) was declassified as a Schedule I drug and is now legal (with restrictions) for production in the United States. Hemp and marijuana are both Cannabis sativa but are distinguished from each other based on the concentration of the psychoactive compound, tetrahydrocannabinol (THC). Industrial hemp is defined by law as a cannabis plant with total THC concentrations on a dry weight basis of less than 0.3% (+/- a measurement of uncertainty). This publication provides a basic overview of hemp testing for THC to stay in compliance with U.S. Department of Agriculture rules for hemp growers.

With the passage of the 2018 U.S. Farm Bill, industrial hemp (Cannabis sativa L.) was declassified as a Schedule I drug and is now legal (with restrictions) for production in the 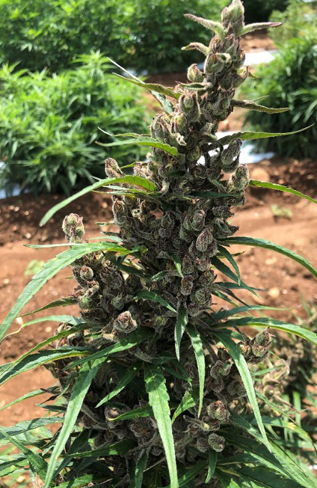 U.S. Hemp and marijuana are both Cannabis sativa but are distinguished from each other based on the concentration of the psychoactive compound, tetrahydrocannabinol (THC). Industrial hemp is defined by law as a cannabis plant with total THC concentrations on a dry weight basis of less than 0.3% (+/- a measurement of uncertainty). Total THC includes the sum of Δ9-tetrahydrocannabinol (Δ9-THC) and its acidic precursor, Δ9-tetrahydrocannabinnolic acid (Δ9-THCA) (multiplied by a correction factor). Cannabis plants with THC levels greater than 0.3% (plus a measure of uncertainty) are classified as marijuana, which is currently listed as a Schedule I controlled substance.

Industrial hemp is a versatile crop offering many potential uses including production for food, fiber, fuel, or for medicinal properties. This publication will focus primarily on the production of industrial hemp for medicinal products. Currently, much of the industrial hemp being grown in the U.S. is to produce cannabidiol (CBD), a non psychoactive cannabinoid compound with reported antioxidative and anti inflammatory properties. In addition to CBD, growers and processors have an interest in a broad spectrum of cannabinoids that will be discussed later in this publication. Testing these compounds is critical because growers and processors are ultimately attempting to produce industrial hemp with the highest amount of CBD or other cannabinoids without exceeding the legal limits of total THC. This publication will introduce some of those cannabinoids as well as testing procedures growers may encounter when they produce industrial hemp.

Cannabinoids can be found in every above-ground part of the cannabis plant but are especially concentrated in the female flowers and their associated secretory trichomes (Figure 1). As the plant matures, a complex pathway produces cannabigerolic acid (CBGA), which acts as the parent cannabinoid. Through additional chemical processes, CBGA gets converted into tetrahydrocannabinolic acid (Δ9-THCA), cannabidiolic acid (CBDA), or cannabichromenic acid (CBCA) (Figure 2). While genetic differences in hemp varieties play a role, often CBDA and THCA are the most abundant cannabinoids found in hemp flowers, although some varieties have been introduced that produce primarily CBGA. You’ll notice notice that all the chemicals listed so far are the acidic cannabinoids (CBGA, Δ9-THCA, CBGA, CBCA), with the “A” standing for acid. These chemicals get transformed into their biologically active counterparts (CBG, Δ9-THC, CBG, and CBC) when exposed to heat or light following the harvesting process. This process is called decarboxylation, as it removes the carboxylic acid portion of the molecule. Cannabis testing regulations often discuss testing for Δ9-THC “postdecarboxylation.” By heating the cannabis tissue or extracts, the Δ9-THCA is converted into Δ9-THC. However, if the cannabis sample to be tested is not heated and does not go through decarboxylation, then both Δ9-THCA and any Δ9-THC must be measured and combined to give total potential THC. If samples are not subjected to decarboxylation and only Δ9-THC values are reported, then the results of that test are going to underestimate the total THC present. As a grower, one must understand test results so as to not have a crop destroyed when it is tested by the regulatory agency in your state responsible for regulating hemp production (in Georgia, this is the Georgia Department of Agriculture). 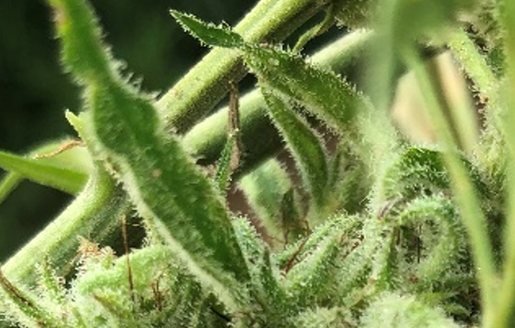 Figure 1. A close-up of trichomes on hemp floral material. Trichomes are hair-like structures that form from the epidermis of plants. On hemp, they are glandular and produce secretions that contain high concentrations of cannabinoids and other chemicals. 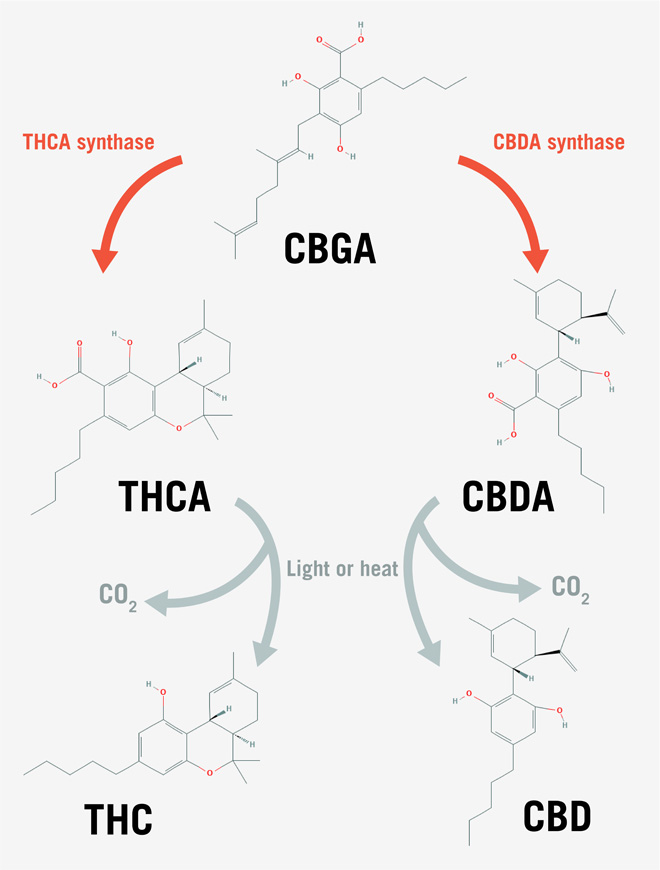 At the time of publication, the U.S. Department of Agriculture (USDA) has approved two methods for measuring cannabinoids in industrial hemp: gas chromatography (GC) and high-pressure liquid chromatography (HPLC). Chromatography is known as separation science, as it utilizes both the chemical and physical properties to separate chemicals within a substance or solution so that those chemicals can be measured individually.

GC measures gases or volatile chemicals using a non-reactive gas (like helium or nitrogen) to carry these mixtures through a long capillary column (Figure 3). These columns allow some chemicals to pass through quickly while others move much more slowly. These differences in speed of movement through the column relate to both the size and chemical properties of the specific compound. As the chemicals exit the column, they pass through a detector that produces a signal based on the concentration of the compounds. Due to the volatility of cannabinoids, gas chromatography is an effective measurement process. However, the heat required to convert these liquid chemicals into gases transforms the acid cannabinoids (e.g., THCA, CBDA) into their neutral form (e.g., THC, CBD) through decarboxylation, as discussed earlier. Results produced using a gas chromatograph will not include the acid cannabinoid forms and represent total cannabinoid content. 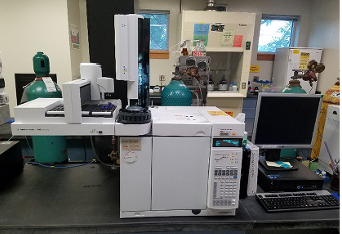 Figure 3. A gas chromatograph that is used to analyze volatile compounds.

HPLC is generally used for quantifying less volatile compounds, and like gas chromatography, HPLC uses a column to separate chemicals based on physical and chemical properties before being passed through a detector (Figure 4a). As the name implies, instead of a gas, HPLC relies on a pump (or pumps) to push liquid solutions through the column at a high pressure to separate the chemicals. Because this process does not involve heat, the cannabinoids do not undergo decarboxylation and remain in their native form. As a result, reports produced from HPLC will show concentrations for cannabinoids in both the acidic and neutral forms (Figure 4b). 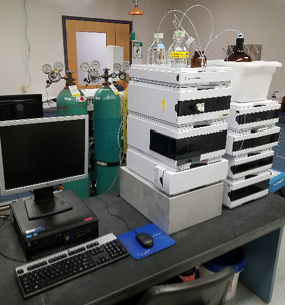 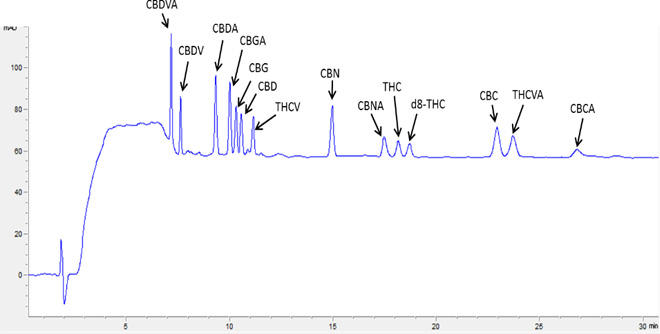 Figure 4b. A graph of the signal produced from an HPLC (known as a chromatogram) demonstrating how the individual compounds within a sample (in this case a standard containing 14 cannabinoids) are separated, allowing the concentrations of each to be determined individually.

Labs typically will report cannabinoid levels as either percent (%) or milligrams per gram of sample (mg/g) based on the weight of the sample. It is important to know the difference between fresh weight (also sometimes referred to “as received”) and dry weight. Fresh weight is the weight of the sample as it was received by the lab and will include any moisture contained in the sample at the time. Alternatively, results may be reported on a dry weight basis in which the moisture content of a sample is determined, and the water content is subtracted mathematically, eliminating variability due to the moisture content. Because the lab removes moisture for samples reported on a dry weight basis, the cannabinoids will be more concentrated than those reported on a fresh weight basis. As dry weight is the most accurate method for reporting results, the USDA requires that all official samples for percent (%) THC be reported based on dry weight.

As discussed previously, depending on the testing method used (GC or HPLC), the lab report will include levels for the neutral cannabinoids (CBD, THC, etc.) if using gas chromatography (since these samples were decarboxylated), or will contain values for both the neutral and acidic (CBDA, THCA, etc.) cannabinoids if HPLC was used (these samples are not decarboxylated). As the law requires hemp to have a total THC content of less than 0.3% (+/- level of uncertainty), the total THC is determined by summing the Δ9-THC and the THCA concentrations when HPLC is used. The THCA concentration is multiplied by a correction factor (0.877) to take into account the additional weight of the carboxylic acid chain on THCA.

Depending on the lab, the information provided in lab reports will vary widely. Typically, labs will include standard information such as analysis and extraction dates, sample names and lab numbers, and maybe even a picture of the sample analyzed. A typical output from a sample may look like the proceeding table (Table 1). You will notice that in Table 1, there are rows for both Δ9-THCA and Δ9-THC. Here, because the test was done using HPLC and not decarboxylated (heated), the majority of the THC in the sample is still found in the acid (Δ9-THCA) form and very little is found as Δ9-THC (usually abbreviated THC for clarity). In order to assess the total THC (what you as a grower are tested on) you must add both Δ9-THCA (multiplied by a correction factor) and Δ9-THC. In this example, the sample is at the legal limit to be considered industrial hemp. The CBDA value of 8.99% is also of interest because this is the basis of how the oil yield is determined, and ultimately how much money the hemp is worth to the farmer.

This publication briefly discusses industrial hemp testing. However, be aware that test results are only as good as the sample that is tested. Just as with any other testing procedure (e.g., soil, plant nutrients), samples for cannabinoid testing must be taken in such a way that they are representative of the larger production area. The USDA has produced sampling guidelines (https://www.ams.usda.gov/rules-regulations/hemp/informationsampling) for testing plants in the field that should be followed to stay compliant. Trial results have indicated that cannabinoid concentrations increase in the flower material as the plant ages. Therefore, regular sampling is necessary for growers to avoid going over the legal limits of THC in hemp.

Limit of detection (LOD): also known as the detection limit, the LOD is the smallest amount of a specific chemical that can be identified in a sample using a specific lab method. Labs often will not report the concentrations of a chemical as zero (0), but instead will indicate that cannabinoids were less than (<) the limit of quantification. While the amount of the specific chemical in a sample may be quite low, different labs that use a different method may be able to identify some level of the chemical within the same sample.

Limit of quantification (LOQ): also known as the reporting limit, the LOQ is the smallest amount of a chemical that can be accurately determined using a specific method. While the limit of detection indicates the smallest level of a chemical where a signal can be seen using a method, the reporting limit identifies the lowest level of that chemical required to produce reliable results.

Percent dry matter (%): indicates the amount of a sample (mass) that remains when all moisture is removed. This is calculated as: % dry weight = weight of dry sample / weight of fresh sample x 100.

Fresh weight: the weight (mass) of a sample as it is harvested from the field and includes any moisture contained in the material at the time.

Parts per million (ppm): a unit of measure used to represent the relative abundance of a chemical, where a 1 ppm solution means one-millionth of that solution is the desired chemical. Parts per million is commonly written as mg/L or µg/mL for liquids or mg/kg or µg/g for solids. Parts per million can be converted to % by dividing by 10,000 (3100 ppm = 0.31%).

Cannabinoids: a class of compounds found in cannabis plants. Cannabinoids contain 21 or 22 carbon atoms and many have been identified to contain medicinal properties including THC and CBD.

Terpenes: a class of plant-derived chemicals with medicinal attributes that typically have strong odors. Examples of terpenes in hemp include limonene, which has a citrus aroma, and pinene, which has a pine aroma.