Small-market vegetable production in Georgia has increased dramatically over the last decade. Unfortunately, growers seem to be faced with more challenges now than ever before. One of the greatest issues they face is controlling the multitude of insects that continuously invade their crops. Insects such as leaf-footed bugs, stink bugs, cucumber beetles, and similar pests can quickly destroy or diminish the bottom line of a grower’s harvest. Along with environmental sensitivity, fewer effective pesticides create an ongoing need to look for alternative methods to control pests. Trap cropping is one method to reducing insect pressure on desirable crops. While it is not the sole solution, it can assist in an overall insect management plan.

Trap cropping is not a new concept, and although the method has been studied, it could be more fully implemented in the state of Georgia.

A TRAP CROP can be defined as a sacrificial plant that draws away damaging insects from the desirable crop.

Essentially, a trap crop works as an alternative host that draws away invading insects, giving the main vegetable crop an added layer of protection. In some cases, insects have a preference for these alternative hosts, and when given the choice, will go to the trap crop first. Insects are highly attracted to plants that are in the reproductive stage of growth. Trap crops that mature quickly and produce some type of seed, fruit, or flower are particularly attractive to many damaging insects. After trap crops are infested with target insects, they can be controlled with timely insecticidal applications or mechanical removal. The primary benefits of trap cropping are reduced use of pesticides on valuable crops and low cost control of insects for the producer. While trap cropping can be extremely beneficial, it is often not a complete solution. Trap crops will not control all insects and the use of integrated pest management (IPM) is necessary. IPM practices include rotating crops, attracting beneficial insects, and prudently using organic and synthetic chemicals. 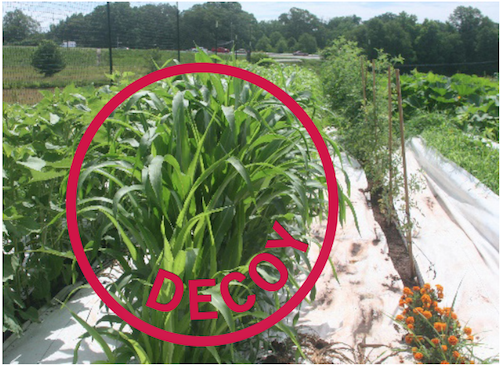 Trap crops are sacrificial plants used near desirable plants to draw insect pressure away, much like a decoy.

A trap cropping system can be implemented in several ways. To attract damaging insects, plant a separate block of desirable crops about two weeks earlier than the main crop. Grow the trap crop a small distance away, about 8 to 12 feet.

Cherry tomatoes are one example of an effective trap crop. Although they may be a desirable crop in a garden with the intention of harvesting the crop for sale or consumption, they are highly attractive to insects such as stink bugs and leaf-footed bugs. A small monoculture block of cherry tomatoes planted a distance from the main crop will often draw in the majority of the pest insects. The trap block can then be sprayed to knock down the levels of invading pests. 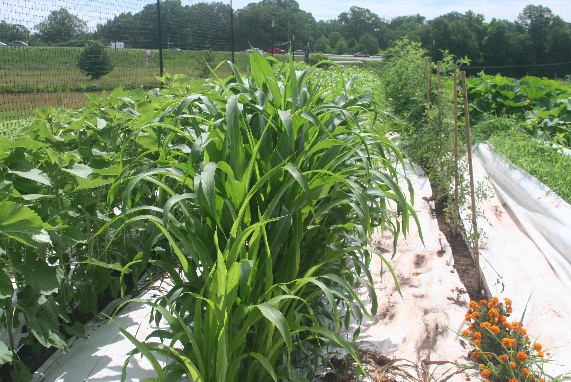 Although cherry tomatoes are a desirable crop to grow, they can also work as an effective trap crop. 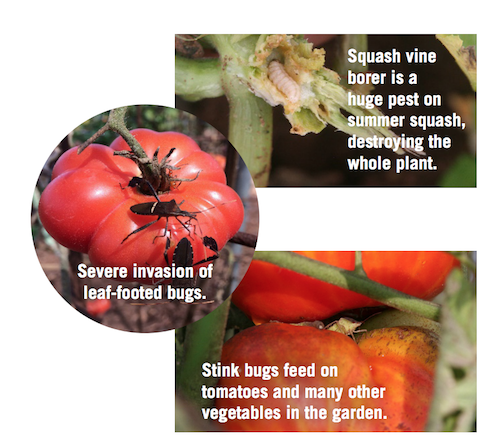 Hubbard squash is another example of a desirable plant used as an effective trap crop. A variety such as ‘Blue Hubbard’ squash can be grown for its edible large fruit and consumed or sold on the market. In addition, these varieties are very attractive as trap crops, luring in cucumber beetles, squash vine borers, and squash bugs. These are large, vining type plants that need a lot of room to grow. 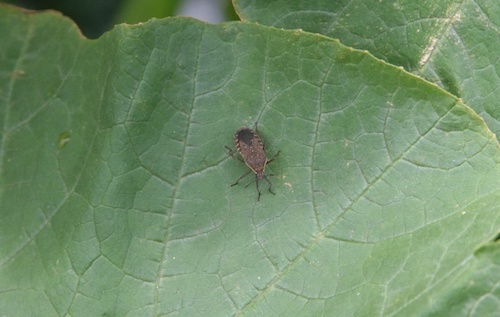 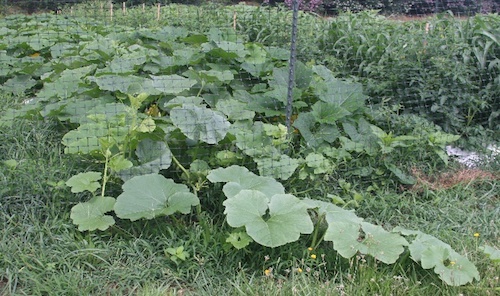 Hubbard squash needs to be given plenty of room or it will grow out of bounds quickly.

Okra is also highly attractive to leaf-footed bugs and stink bugs. It is a highly desirable production crop. Similar to cherry tomatoes, a sacrificial block of okra can be planted to draw insects away from the desirable garden. 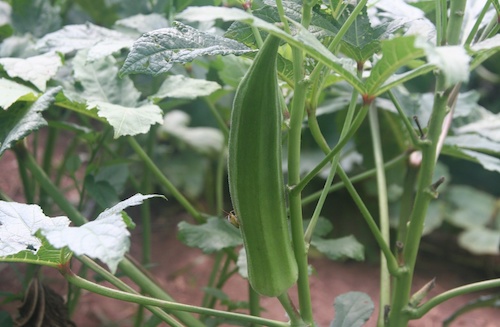 Okra is another example of a plant that can be used both to produce a harvest as well as a trap crop. It is highly attractive to stink bugs and leaf-footed bugs.

Another form of trap cropping is to use an entirely different species of plant. In many cases, the trap crop will be completely unrelated to the vegetable you are trying to protect, but will attract the same type of pests. Sorghum and sunflowers are an example of trap crops that can be used near desirable plants. Research has shown that both of these plants are extremely attractive to stink bugs and leaf-footed bugs. Both trap crops are extremely inexpensive to establish from seed.

Since the trap crop will be most effective when it begins to flower or seed, it’s important to establish it earlier than the desirable crop. A good starting point is to plant the trap crop two weeks prior to the desirable crop. To provide an extended control session, it is also suggested that the grower continue to stagger new plantings of the trap crop every two to three weeks. Trap crops work best when planted at least 8 to 12 feet away from the desirable vegetables. Two to three rows of each trap crop should be planted at a time. It’s important to scout trap crops frequently and to prevent the insect population to get out of hand before some control measure is applied. Trap crops will need similar care to your desired crops when it comes to fertility and irrigation. Weed infestation should also be managed with mechanical or chemical methods. Trap cropping is one weapon that can be used to combat insect pressure for the commercial and home grower. Research has shown that it can assist in providing some relief of insect pressure to desirable crops. Trap cropping may not work for everyone, but it is a possible solution for those preferring to use fewer chemicals in their garden.