Tomatoes are one of the most popular vegetables grown in the home garden. While they can yield an abundance of healthy and tasty fruits, the home gardener may also find them frustrating to grow. Beyond the obvious diseases and insects that attack homegrown tomatoes, there are several cultural problems that can occur. You can produce a crop for your table by quickly recognizing these physiological problems and doing your best to prevent them.

Improperly planting tomatoes guarantees that you’ll have problems growing them. Remember that tomatoes are tropical plants that do not enjoy cool temperatures or cold soils. Tomatoes will have a number of problems when planted in soil that has a temperature lower than 60 degrees Fahrenheit. In addition to warm temperatures, tomatoes do best when planted in loamy, well-amended soil. Tomatoes should be planted deep, at least half the length of the stem, with most of the side branches removed before planting. Planting tomatoes deep will encourage strong rooting. 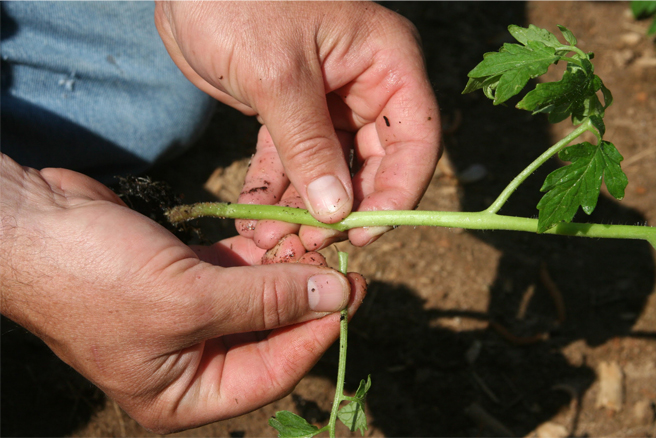 Pinch off side branches on the bottom portion of the tomato plant prior to planting. 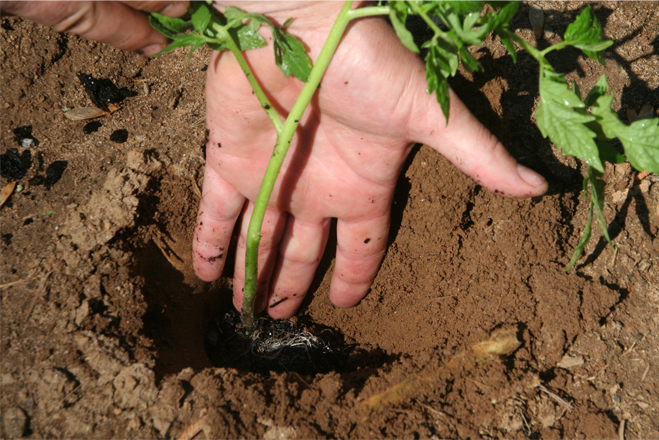 Plant tomatoes deep in the soil to encourage strong rooting.

Anywhere the soil touches on the stem, advantageous roots should emerge, helping the plant develop a strong base. For indeterminate vining varieties, a strong cage or staking system should also be used. When possible, space cages to allow several feet between plants to improve ventilation. Cages should be well anchored to avoid toppling over and injuring the plants. 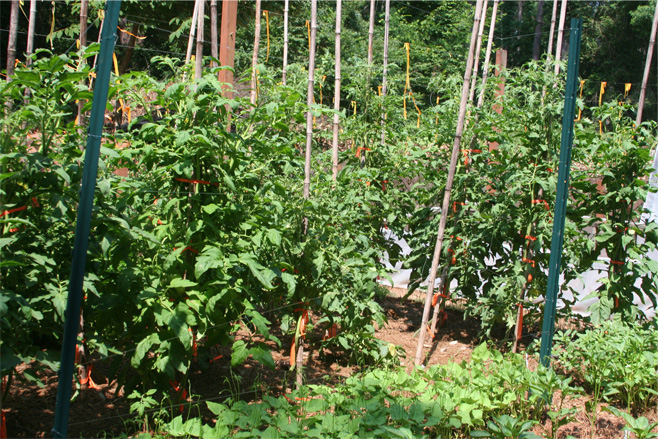 Proper staking and spacing are essential to prevent tomato problems.

Be sure to conduct a soil test to determine the soil’s pH and fertilization needs. The pH of the soil should be slightly on the acidic side, somewhere between 6.0 and 6.8. At planting time, it is a good idea to use a premium fertilizer containing the essential micronutrients that may be delinquent in the soil. The first fertilization should take place at planting time, and not again until pollination has taken place and dime-sized fruit has appeared.

Care should be taken when using liquid fertilizers on tomatoes, as applying too much nitrogen can cause excessive growth and hinder flowering. Tomatoes will also benefit from mulch placed around the base of the plant. In addition to acting as an insulator and weed preventer, mulch helps to preserve moisture. Tomatoes require approximately 1.5 inches of water per week. Irrigation should be applied toward the base of the plant to avoid wetting the foliage and reduce the instance of disease. Drip irrigation, soaker hoses, and water-filled milk jugs with small pinholes are ideal ways to deliver moisture to your plants. Tomatoes grow well in raised beds and containers. Keep in mind that tomatoes require more irrigation in the fast draining medium.

A new trend in growing tomatoes is to use graft plants. Grafted tomatoes use the rootstock of a very resistant variety, with the top portion of the graft being a more desirable flavored tomato. The science behind this suggests that it can be easier to grow difficult varieties, such as heirloom tomatoes, by having them grafted onto a resistant cultivar. While this process may provide some disease and problem assistance, it is not a substitute for good cultural practices. Grafted tomatoes are expensive, and can still pick up many problems that affect non-grafted plants.

There are several common nutritional disorders that affect tomatoes. All nutritional deficiencies can be corrected through the use of a premium, properly applied fertilizer that contains micronutrients. It is also vital to maintain the proper pH and moisture requirements of the plant.

Nitrogen: Nitrogen deficiency is characterized by a pale yellow color of the lower leaves. The older, lower leaves will turn yellow first, and yellowing of the foliage will continue to work its way up the top of the plant. Too much nitrogen is also a common problem, and can be identified when the plant is tall and dark green, with excessive growth and no blooming.

Potassium: Potassium deficiency occurs mostly on the upper leaves. The leaves typically have a brown margin on the outside of the foliage. The area in between the leaf veins will also appear to be pale in color. Tomato fruit showing potassium deficiency will have a blotchy, pale appearance on the stem side of its skin. 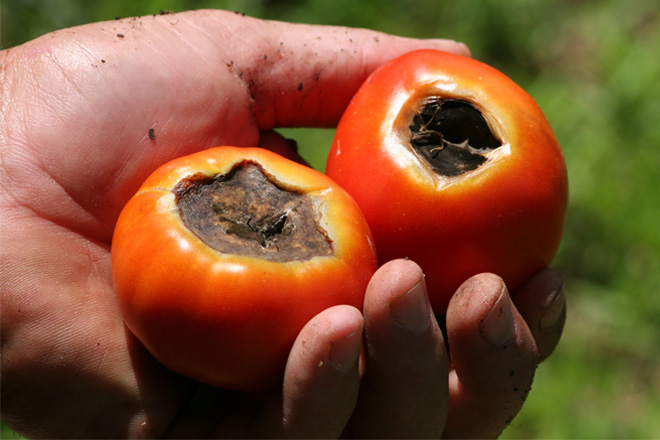 Iron: Iron deficiency is most often characterized by a pale color in the youngest, uppermost leaves. The veins in the leaves may appear dark green, while the area between the veins will be a pale yellow color. Iron deficiency is most common in sandier soils and soils with a high pH. It will also occur in soils that are poorly drained or are too cold for planting.

Sulfur: Sulfur deficiency is sometimes confused with nitrogen deficiency. Sulfur, however, will manifest itself in the upper part of the plant in the youngest leaves. Leaves will appear uniformly yellow, and work their way down the plant.

Tomatoes are very sensitive to herbicides, and herbicide damage can happen easily. Herbicide damage is usually caused by direct contact with a damaging product, treatment with manures containing chemicals, or through the drift of herbicides used on ornamentals or lawn applications. It only takes a light mist of the chemical to adversely affect sensitive tomato plants. Often gardeners try to carefully use glyphosate as a post emergent weed control and accidentally drift a minute amount onto their tomatoes. The plants soon exhibit symptoms and decline from there. Take extreme care when applying these products near your garden, and do not spray when the slightest breeze is present. Only use barn manures that are well aged and have been turned frequently. This allows time for any herbicides present in the manure to break down before applying to the vegetable garden. 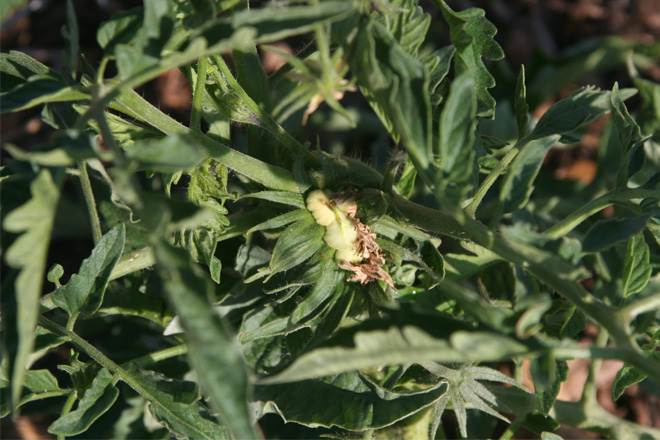 Tomato Leaf Roll: Symptoms appear as tomato leaves suddenly roll up, giving the appearance of needing water. This disorder usually occurs during times of drought or cold weather, and is most often seen at the very beginning of the planting season. Tomatoes planted too early in the season, before soil temperatures have warmed up sufficiently, are most susceptible to this condition. Avoid planting tomatoes until soils have warmed up to above 60 degrees to help prevent this disorder.

Blotchy Ripening: This disorder appears as a discolored fruit with a blotchy appearance and an excessive, white, hard core inside the tomato. Blotchy ripening is most often caused by poor irrigation practices, drought, or heavy rain.  Minimize the occurrence of this disorder by  applying irrigation at the proper intervals.

Sunscald: Sunscald appears as a wilted, brown area on the side of tomato fruit. It occurs when excessive sunlight is allowed to breach the exposed area of a developing tomato. Sunscald can be prevented by not over pruning your tomatoes, allowing a dense canopy to form above the fruit.

Catfacing: Catfacing is usually the result of blooms sticking together or not fully developing into a completely pollinated fruit. The condition is aggravated by cool weather. The developing fruit may manifest into unique or underdeveloped shapes. Catfacing can be prevented by waiting until soils warm up to at least 65 degrees before planting.

Fruit Cracking: Fruit cracking occurs when tomatoes absorb too much moisture at one time. Tomatoes swell in size, and begin to split open  from the pressure of too much moisture. The splits  can appear as concentric rings or star shaped splits around the stem of the plant. Some varieties are  more prone to fruit cracking than others. This condition can occur during drought periods  followed by heavy rains, or by poor irrigation practices. Controlled, slow-drip irrigation will  help prevent this disorder from occurring.