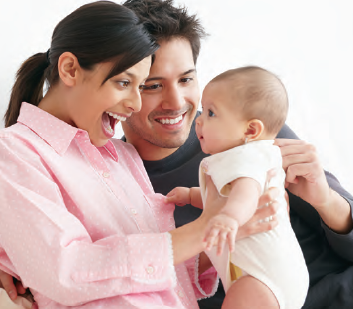 Have you ever tried to learn a foreign language? Did you struggle with Spanish in high school? If you're like most adults, learning a new language can be challenging. Millions of high school and college students study foreign languages every year, yet few ever become fluent.

But the average baby learns a new language relatively easily. Within just a few years, most children can understand what others say and can express themselves well. And young children learn language simply by listening to and interacting with other people around them.

Why can babies learn language so much more easily than adolescents or adults? Part of the answer has to do with differences in our brains.

The baby's brain is "primed" to learn language. Babies are born with billions of brain cells called neurons, including millions that will control language. During the first years of life, the neurons connect with other cells to form complex pathways. When babies hear their native language spoken, the language connections in the brain become stronger. As babies continue to hear language and experiment with making sounds themselves, their language pathways grow and change.

Most of the brain's language connections are well established by about age 10 to 12. After that time, learning a new language is still possible, but harder because your brain is wired for the language you learned first.

Newborn babies are equipped to hear the sounds of any language in the world, not just the language their parents speak. Three-month-old babies can distinguish several hundred sounds — many more than are present in any one language. But as the baby hears people speak a certain language repeatedly, the brain strengthens connections for that language. The connections for languages that the baby does not hear become weaker and will eventually be pruned away. When we try to learn a foreign language as adults, we must fit the new sounds into the language connections already wired in our brain — connections that were created specifically to understand and speak English.

By adulthood, most people have trouble distinguishing sounds that are not in their languages. For example, people who learn Japanese as children often confuse the "r" and "l" sounds of English, pronouncing "lake" as "rake," because the "l" and "r" sounds are not different in Japanese.

Adults make learning language easier for babies. Most adults naturally talk differently to babies than to adults. We talk more slowly, raise the pitch of our voice, and exaggerate the accents in words. These changes (known as infant-directed speech) make it easier for babies to hear our language and recognize the patterns of our words. Even children as young as 4 years old make some of these changes in their speech when talking to a baby.

Adults also tend to repeat words and phrases when they talk to babies. Repetition helps babies learn to understand speech and strengthens the language connections in the brain.

What Can You Do?

Babies learn language by hearing other people speak around them and by practicing making those sounds. Here are some ways you can help your baby learn language: